The first project unexpectedly attracted audiences of more than 4,000 children, proving to Poltrona that there is a great need for clowns and entertainment in crisis situations. He founded Clowns Without Borders to offer humor as a means of psychological support for communities that have suffered trauma.

Two more clowns, Boni & Caroli, accompanied Tortell in May, 1993, traveling and performing in Croatian refugee camps. Clowns Without Borders organizations soon sprang up in France and Sweden, and the CWB model expanded into other areas of conflict. Since 1993, Clowns Without Borders chapters have completed 127,500 projects in 123 countries around the world.

After a 1987 trip to perform in Guatemalan refugee camps in Chiapas, Mexico, and a 1991 trip to perform in South African township schools, Moshe Cohen joined Clowns Sans Frontieres for a 1994 tour to Croatia. He then started Clowns Without Borders USA in 1995. In 2006, the organization incorporated as a 501(c)3 non profit. CWB – USA operates thanks to the professional clowns who donate their time while on tour.

CWB AROUND THE WORLD

CWB – USA on Chicken Soup for the Soul

CWB – USA is thrilled to be part of Chicken Soup for the Soul’s 2019 Hidden Heroes program. Watch Executive Director Naomi Shafer talk about our work, and resilience through laughter. 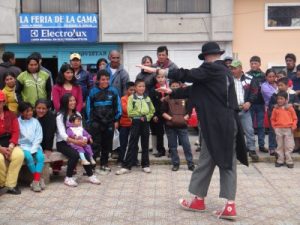