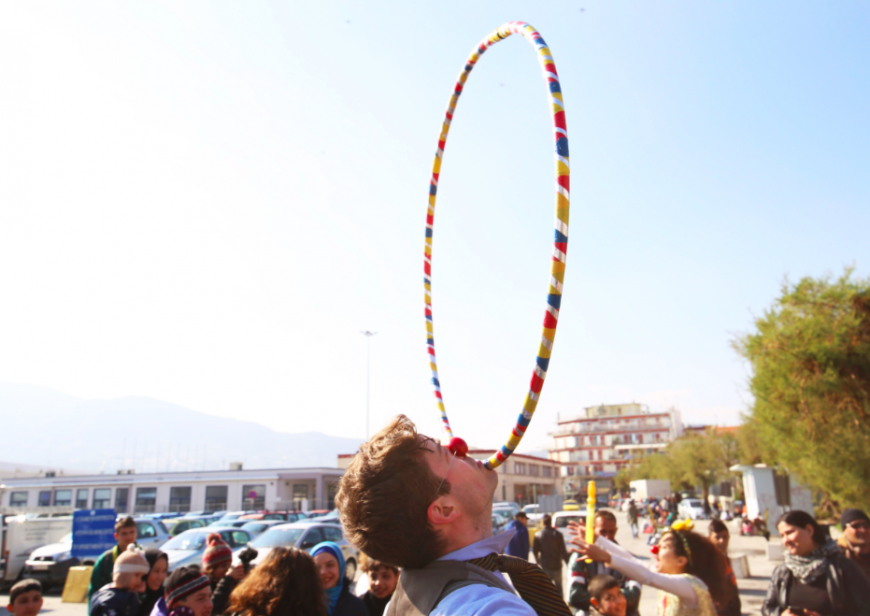 Nose matter which way you look at it, that bright red honker announces, “Something different is about to happen!”

In the United States, red noses are sometimes associated with negative perceptions of circus. CWB – USA board member Sarah Liane Foster says, “I stopped wearing a red nose in the U.S. because it has become such a weird symbol. People don’t see it as a mask or the way a character looks, they just see a ‘scary’ clown.” That said, CWB performs globally, and non-U.S. communities often have a positive reaction to clown noses. Bekah Smith says it’s a symbol of lightheartedness, an invitation to play, and an opportunity to initiate interactions with strangers.

Some CWB artists wear a nose depending on the type of circus art they’ll perform in a show. “I only wear a nose for my CWB work,” says Montana DeBor. “As someone who identifies primarily as an aerialist, I feel very honored to wear a clown nose.” Once her nose is on, Montana says she’s in character and ready to play and communicate as a clown. “I put it on early and it’s the last thing I take off. The timing matters. In Haiti, we would be in the back of a pickup truck, and put our noses on. I definitely got some strange looks, but it was worth it to arrive and be ready to clown!”

Some CWB artists perform sans-red nose, no matter where in the world they happen to be. CWB – USA founder Moshe Cohen never wears a nose, because he wants to share the human nature of the humor. “I feel I can better do that without a nose,” he says. Moshe points out that the nose exists for audience members to identify the clown as Other. That can be helpful, especially when a clown is living through rough-and-tumble slapstick experiences, or, as Sarah describes it, the “sublime stupidity” of clowning. But Moshe thinks the red-nose clown becomes too separate, and he endeavors to clown without becoming the Other. “If I can do that, it touches a different piece inside people,” he says.