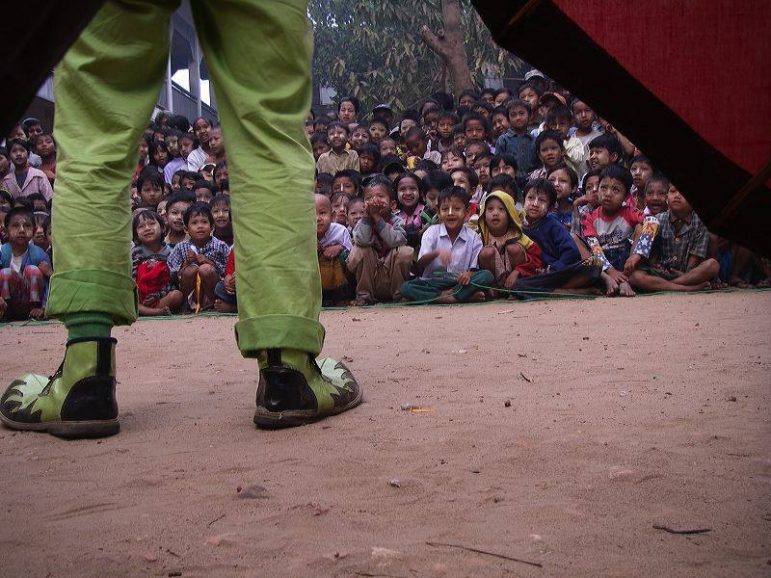 A Case for the Clowns: Ebola

Why Clowns Without Borders Works

Tortell pirouettes quickly and the microphone swings around behind him; it has a life of its own. The centrifugal force of the windscreen pulls the instrument around his arms and legs, making his clown blazer flop poetic in the wind. The crowd’s eyes are wide with surprise when he catches the mic just before it hits him in the face—Tortell’s eyes matching the eyes of the 100 children and families in the audience. His relief, their laughter.

He has just spent the first 10 minutes of the show warming up the audience, a master street artist who draws the crowd in as he sets the stage. It is more than 100 degrees Fahrenheit, pushing 105 even. The audience and clowns from Spain stand in the shadow of a two-story colonial building with stone archways and wooden doors. Its tile portico is cool to the bare feet of some of the audience, the West African designs deflect the heat of the pounding sun. It is about three in the afternoon, Tortell and his clowns have already performed two shows in Freetown and now they are presenting their final show of the day before heading further east.

Once Tortell regained control of his rogue microphone he announced the opening of the show—acrobats and movement artists entreated the audience to a spectacle that consisted of partner juggling while standing on the ground and on shoulders. The performers danced with fantastic and impossible objects—a giant fabric butterfly and streamers. All the while Tortell interjected the finessed scenes with mischievous intrigue, he tried (and always failed) to recreate what the movement artists had just performed, he filled the space with magic tricks winning over the audience with his glorious, comedic bungles.

I stuck out as an audience member, the only white person in the crowd. And though I tried to stand back from the front row, away from children and among the adults, parents turned to me and asked me when I would go and join the clowns.

“Yes, but you must be.” An audience member grabbed my arm and pulled me toward the stage.

I froze, not playfully, but with a sense of deep, reactionary discomfort.

I had not been touched for almost nine weeks, by a stranger, that is. We were not supposed to.

The government of Sierra Leone had set a national edict—ABC: Avoid Body Contact. When the woman from the audience touched my arm and I felt a surge of adrenaline, then fear. It was fight or flight. I was breaking the rules; they had been broken on me. I felt like, for a fleeting moment, a victim. Had I been contaminated?

The woman then laughed out loud, seeing my awkward reaction to her touch “OK, but I think you are a clown too! Look at them, they are so amazing!”

Another man near us noticed our commotion and he then held my hand as he explained to me why Tortell’s magic plastic bag bit was so funny. He described in detail how he thought the magic trick was happening, and having done the gag before myself, I can say that he was mostly correct.

“But look at the children!  Look at them! They love this so much!” Another man chimed in. 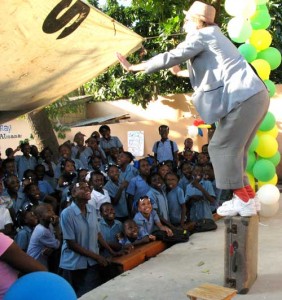 Around us, scrambling to the top of adults’ shoulders were kids who clambered to get closer to the clowns. Their laughter was silenced to a vibrant, low chatter only when the clowns presented movement pieces of silks flying through the air and then thunder released again when Tortell entered and tripped over a brick on the rough strewn road. Like waves of the ocean, their laughter came and went. Laughter like this, according to the host who welcomed the clowns from a small German NGO, had not been heard for some time.

I came to Sierra Leone, like hundreds of others, to work as a nurse. From 2013-2016 the Ebola epidemic, first in Guinea, then Liberia and Sierra Leone took the lives of more than 11,000 people. Children (under the age of five) who were infected had a 20% chance of survival when the disease prevalence was near its peak. As a pediatric nurse, I still find it hard to describe the heartbreak of losing eight out of every ten pediatric patients we treated with Ebola. The rate of survival for older children increased with their age, as did fear; as did depression; and as did withdrawal from play and community.

The unfathomable psychological destruction of the Ebola crisis reared its ugly head every day to those of us who worked in the “hot zone,” constantly desperate for supplies, more human power and for a cure. Children who survived the disease appeared frightened to leave our treatment units and return home—we learned very quickly that community members were often not welcomed home after surviving Ebola because of stigma born of fear and misunderstanding the nature of the contagion. People separated themselves from others, people were afraid to interact like before, people were judged and communities fractured. Children no longer played.

Towards the end of the clown show, one of the acrobats found a red, triangular flag and showed it to the audience, which had doubled in size and by now had formed a complete circle around the artists. The clown waved the flag proudly in the air. Tortell snatched it, then invited an audience member to come to the stage. A grown man stepped forward much to the pleasure of the audience. The clowns made the red flag disappear, then appear again from places like the man’s ear or from inside of his shirt. Then a clown made the cloth disappear and reached into Tortell’s waistband to retrieve it. Instead of the cloth coming forth, a long strip of plastic, red and white caution tape, like that used at the site of a crime scene appeared as the clown ran from Tortell revealing its full length. The tape had red and white vertical stripes—the same tape used throughout Sierra Leone to quarantine homes with people suspected of having Ebola. The clowns ran around the audience member with the tape and they all became entangled in a picturesque finale for that bit. The audience, especially the man they volunteered were beside themselves with laughter. A man near me, who still did not believe that I was not in the show held my arm and leaned against me for a better view. For a moment, we were all limitless in our laughter.

I looked through the audience and for the first time since I had arrived in Sierra Leone, there was not a face that showed fear.  People were not stymied to stand with each other and accompany each other in playfulness. Everyone was together. Everyone looked normal.

War, poverty, and disease trigger the worst of humanity. They create a “new normal” of suffering, stigma, and division. What the clowns did on this excruciatingly hot day was provide a platform whereby normalcy reigned again. The laughter broke the hold of stigma—even if it was just for a moment—and through the ridiculousness of the clowns, people saw each other not through the lens of disease but through that of a common humanity.