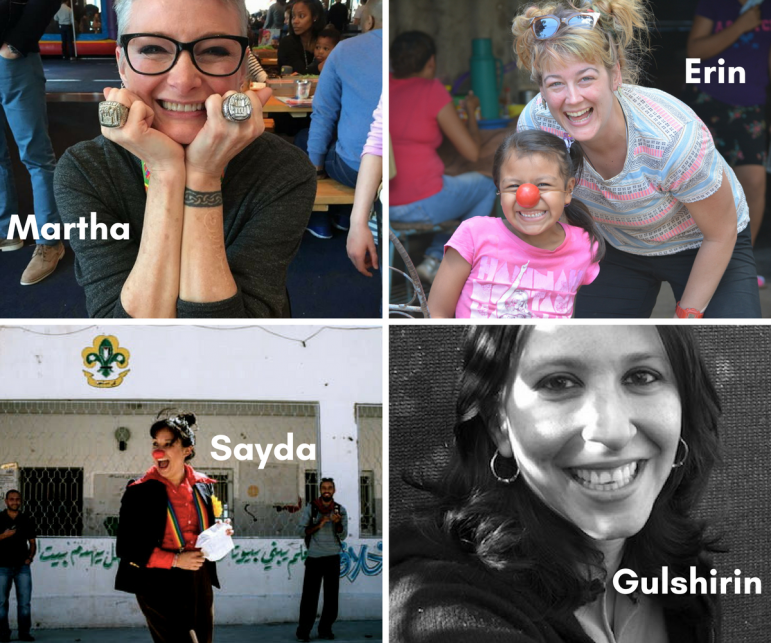 Clowns Without Borders USA proudly announces the addition of four new members to the Board of Directors. Our new members bring a wealth of expertise, energy, and a deep passion for the mission of our organization–to bring laughter where it’s needed most. Get to know our newest members: Erin Leigh Crites, Gulshirin Dubash, Martha Neighbors, and Sayda Trujillo.

Erin Leigh Crites is an international theatre artist, educator, and purveyor of make believe. In the past ten years, Erin has traveled extensively to explore the global community and create bonds through theatrical play. From 2013 to 2015, she worked in an international ensemble to develop and originate a role in Nobel Prize Winner, Dario Fo’s newest, unpublished play, La Storia di Qu for the International Milan Expo. This work reinforced her passion for international collaboration and fueled her continued teaching of workshops in ensemble dynamics, clown, mask work and devising, all of which center around the conveyance of meaning through physicality rather than language. Currently, she splits her time between Los Angeles and Idyllwild as an ensemble member of Fiasco! Physical Theatre and as a full-time instructor in the theatre department at the international boarding school, Idyllwild Arts Academy, respectively. She joined Clowns Without Borders in 2010 after receiving her MFA in physically based ensemble theatre from Dell’Arte International.

Gulshirin Dubash (teacher/actor-creator/director) is originally from Mumbai, India, and has spent the last several years doing theatre between the United States and India.  She has been faculty at Interlochen Arts Academy since 2011 where she most recently directed, A Flea in Her Ear, The Servant of Two Masters, Blood Wedding, A Departure (a devised work), The Secret in the Wings and The Caucasiam Chalk Circle. Having received her MFA in Ensemble based Physical Theatre from the Dell’Arte School of Physical Theatre in California, her work is grounded in the pedagogy of theatre practitioner Jacques Lecoq (physical theatre – Commedia dell’Arte, melodrama, clown, street theatre, devised work). Having a strong interest in Eastern forms of theatre she has studied Japanese Noh theatre with master teachers Rick Emmert and the late Mitsuo Kama.  She has been a performer with CWB since 2007, having created the India-centered mission called “Project Muskurahat.”

When asked why she became a member of the CWB-USA Board, she explains, “Being a part of CWB-USA is one of the great loves of her life as it melds her desire of theatre for real change and her love of performing.” Recently her ability to perform has been limited, but she believes she can make an impact by being on the board and living her life in the pursuit of this mission.

Martha Neighbors has been fundraising in the arts for more than 20 years, most recently with Big Apple Circus, where she fell in love with clowning and tripled the Circus’s funding for its seminal Clown Care program. Prior to Big Apple Circus, Martha worked in theatre, dance, visual arts and museums, raising lots of money to help artists realize their dreams and produce innovative, original work. Currently, she is the director of development at the Children’s Museum of Manhattan in New York.

Martha is thrilled to be on the board of Clowns Without Borders, having learned of the organization through a former Big Apple Circus Clown Doctor, Tim Cunningham. She firmly believes that the world needs more laughter and that bringing joy to desperate situations improves the lives of all with lasting benefits. Martha also serves on the board of the A.S. Neill Summerhill Trust, which promotes the educational philosophy and writings of educational pioneer A.S. Neill and provides bursaries to attend Summerhill School in England, of which she is a proud alumna.  She has an M.A. in art history and museum studies from the University of California and graduated summa cum laude from Hunter College in New York.  That Summerhill education really worked.

Martha proclaims, “It is a true pleasure to be part of this organization, and thank you for including me! I lovingly blame Tim Cunningham.”

Sayda Trujillo was born in Montreal and grew up in Canada, Guatemala, and the USA. She is a theatre artist specializing in voice and movement. She also devises original physical theatre performances. Her performance and teaching experience abroad includes work in Guatemala, Ecuador, Singapore, Spain, Germany, Colombia, UK, Egypt, Palestine with The Freedom Theatre, and most recently in India. Her three solo shows BANANA LEAVES, DEFINITELY OOPS, and I WAS RAISED MEXICAN have been presented nationally and internationally at theater houses including La Mama ETC, REDCAT, and NYTW.

Since 2005, Sayda has volunteered for Clowns Without Borders performing for thousands of children in Latin America and the Middle East. She teaches Acting, Viewpoints, Tai Chi Chuan, Contact Improvisation, Voice, and Solo Performance. Her training combines a BFA in Acting from the California Institute of the Arts; a post-graduate certificate in Physical Theatre from the Dell’ Arte International School of Physical Theatre; and a Masters in Voice Studies from the Royal Central School of Speech and Drama in London where the training encompassed a multiplicity of workshops in Vocal Anatomy, Accents, Vocal Pedagogy, Practice as Research, culminating in a Master’s Thesis: Latino/a Voices: Reconsidering the ‘Natural,’ ‘Familiar’ and ‘Cultural’ in Freeing Vocal Expression. Sayda is full-time faculty at Dell Arte International.

As to why she has joined the Board of Directors, Sayda replies, “I have been involved with CWB-USA since 2005 as performer volunteer and project leader. CWB-USA has profoundly influenced my personal work and practice; and my relationship to the world. It makes me very happy to be able to go deeper and serve in a different way, to be an advocate, to help fundraise, to learn about the magic that holds this organization.”