In 2012, after 8 months volunteering my time for Clowns Without Border’s social media and fundraising, I got the call I’d been hoping for and would be going into the field on my first project. I would be leaving for Indonesia in just a few short weeks. Holy cow! After I got off the phone with Tim Cunningham, executive director at this time, my excitement was skyrocketing! This was my chance: to make a difference, to be a strong contributor to my team, to be a representative of Clowns Without Borders. It was all happening!!!

Shortly thereafter, the high wore off, worry set in, and my confidence began to plummet. Was I experienced enough? Would I be able to pull my weight? Would my team like me? Would my audiences like me? And, the question of all questions, would I be funny?

My eyes started scanning the room, my juggling balls gathering dust in the corner, my costume pieces seeming incomplete, my 30-day handstand challenge severely lacking validation stickers. Oh no! Maybe I was going to let everyone down? My momentum came to a screeching halt and I began to panic.

I remember talking with Tim later the next week, assuring him (but more myself) that I had a comprehensive plan in action. My juggling was really coming along. I had been learning new songs on my guitar. I had been drilling acrobatics until my muscles ached. I was going to be ready for this!

Tim, in the most perfectly-Tim way, said, “Cool Kolleen, that sounds great! It’s good to practice these things, but you aren’t going to master juggling in 3 weeks. And, remember that you have a lot of training in physical theater, ensemble creation, and a vocabulary of bits that will be very valuable in the field.” 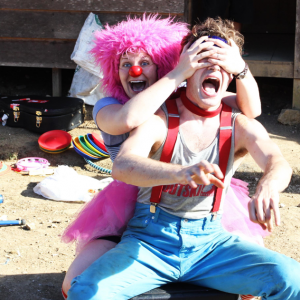 Oh yeah! It was as if all the blood, sweat, and tears I put in at Dell’Arte International had been swept out of my mind. I had immediately compared myself to the many professional circus artists that I knew…and thought I came up short. I do not juggle five clubs, masterfully navigate the rolla bolla, or understand the inner workings of balancing chairs on my chin. But, I am funny. I am a clown, and I know how to create theater with just about anyone. I did not put in a year of my life creating original pieces of work with different people every week for nothing. No sir!

Indonesia came and went, and many lessons were learned. I may not have been the strongest team member of the bunch, but it wasn’t for any lack of trying. I wanted so badly to be good at this! When the call came for Haiti, the following year, I thought, “ok good, I must have done something right”. I left for Haiti with a few more tricks up my sleeve, but again not quite where I’d hoped to be in terms of circus skills. The same worry crept up from the pit of my stomach.

I had been busy in other arenas. I had continued to study physical theater, this time at The Center for Movement Theatre with Dody Disanto, and had put in time at countless workshops and intensives to better understand my craft. I had been on stage regularly, creating new work, as well as teaching camps and workshops. I had been coordinating and hosting fundraisers for Clowns Without Borders, acting as the MC, and loving it. So why, when confronted with the well-practiced skills of my peers, did my knees buckle?

At this point in my “clown-evolution” I understood the value of other people’s skills. Unfortunately, what I could not yet see at this point was the powers that I had mastered. The power to excite a crowd. The power to make every person in an audience feel important, and mean it, from a place of utter sincerity. The power to connect with children, and get them to trust me. The power to listen onstage. The power to improvise at a moment’s notice, to be aware, alert, and responsive. The power to say yes and go with what was best for the show. The power to bring together my ensemble. The power of enthusiasm, positivity, and consistency in the face of challenging circumstances. The power of my complete willingness to be a fool: to dance, to play, and be present every moment. 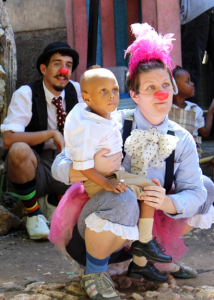 This winter, when Clowns Without Borders invited me to go to Lesvos to perform for refugee and migrant families, my heart soared. This was my third volunteer project and it felt very important, as did being a witness to this world crisis I would be thrust into. More than anything, I wanted to make a difference, to bring joy, laughter, and LOVE.

On this tour, I would be the only musician, and perhaps, for the first time I realized the value of this particular skill. Music is part of my identity. It also is so valuable on a tour, it helps announce our presence, create an environment, and provides accompaniment for others to perform. Again, leading up to the tour, I worried that I wouldn’t be a talented enough musician for the team. Do we see a trend here? But, this fear quickly fell away once the project began. Finally, I began to see the light.

In hindsight, after Lesvos, I saw the value of each type of performer who volunteers with Clowns Without Borders. For the first time, I truly understood that we, as an organization, need both types of performers. Moreover, each type of performer needs each other, and should give each other respect. One type cannot stand alone. For so long, I had idolized the skills that I lacked. But, the reality is that, in producing and performing in shows at home, I know that skill alone cannot anchor a show. The theatrically trained actors, turned clowns, help drive home the astounding tricks, create strong characters, and tell a story. They also allow the audience to relate to the performance, and see themselves in the bumbling fool, the everyman, or everywoman, as it were. 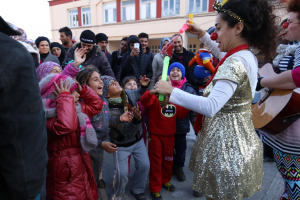 The reality is that what I was looking for was inside me all along. At the risk of sounding cliche, love is all you need. Love, and a killer sense of humor. This isn’t to say Clowns Without Borders doesn’t work with highly trained professional performers, because we do, but rather, that the creative spirit and desire to connect with a full and open heart is nothing to turn a nose up at. It is the core of this organization, and I am so honored to be part of it. 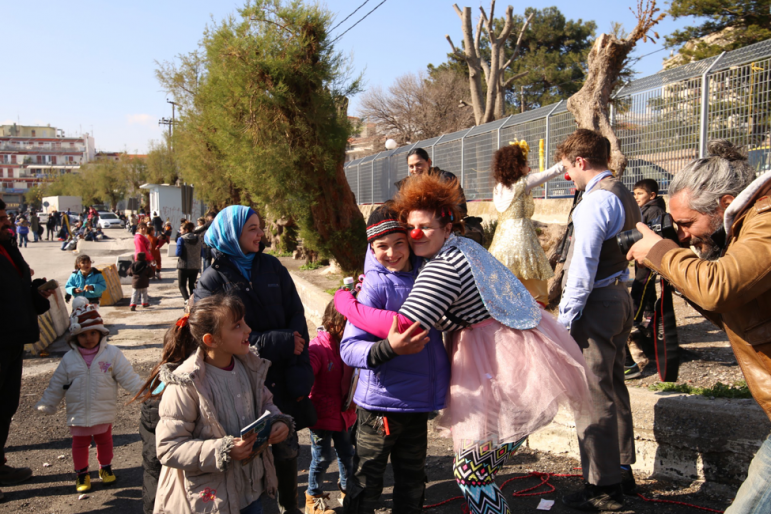