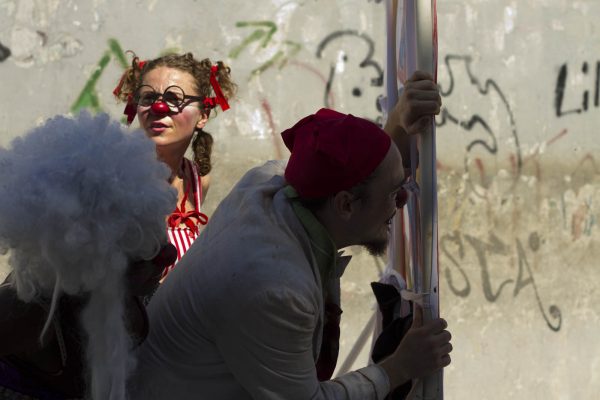 In this series, CWB – USA interviews artists and educators about their experience in clown school. Next up, CWB’s Communications Director Nicole Loeffler-Gladstone talks to CWB – USA board member Selena McMahan, a graduate of The Jacques Lecoq School.

Selena is an actor-clown with the Parisian hospital clown company Le Rire Médecin and a teaching artist with Association Peekaboo! She is also the artistic director of “Inclownito.”

Nicole: How and when did you first start clowning?

Selena: My path was kind of roundabout. I went to liberal arts undergrad at Bowdoin, where I self-designed my own major. I was doing theater and dance when I heard that Moshe [Cohen, founder of CWB – USA] was teaching a workshop in Brooklyn. I had seen Moshe perform when I was a child and I knew that CWB existed, so I knew who he was. Certain people stood out to me at the workshop with their strong understanding of clown, and they all had Pochinko clown training in common.

The workshop got me interested in further training. I came across John Turner [founder of The Clown Farm, now known as Manitoulin Conservatory for Creation and Performance, which is rooted in the work of Richard Pochinko], who teaches on an island in northern Ontario, and I did a workshop with the New York Goofs [now Laughter League].

Nicole: What happened next?

Selena: After those trainings, I heard about the Watson Fellowship, which grants funding to recently-graduated students so they can design and pursue a project outside of the U.S. The first thing that came to mind was CWB. I had heard more about CWB at Moshe’s workshop, and I realized that’s what I wanted to do. I got the grant, propelling me into the work itself without having too much formal training. CWB allowed me to join a tour as the “clown schlepper,” but eventually the other artists decided I could just be in the show. I visited and performed with a lot of hospital clowns and was able to do weekly training in Brazil.

Nicole: How did your year as a Watson Fellow impact your future decisions about clown training?

Selena: After that year, I thought I should pursue more formal training and I considered going to Dell’Arte because I was exposed to lots of performers who had studied there. But the people who stood out to me in with amazing listening skills in their hospital clown work, had all gone to the Jacques Lecoq School. I had heard all kinds of not-so-great things about the culture of the school, but I decided I needed to go there. It helped that I spent time in France as a kid, so it was relatively easy to move to Paris.

Nicole: What kinds of not-so-great things did you hear? And despite that, it still seemed like the right place?

Selena: Pochinko went to Lecoq, but might have been kind of kicked out in the middle of the first year. His clown is inspired by that school, but so much freer, more mystical, spiritual, and intuitive. So in a way, I went from the more intuitive training—just going for it with performing—to a much more formal training afterward. I had already broken out, so I wanted to adhere to more formal training.

Selena: I learned so much there. The environment is very…strict, or formal. But the pedagogy is amazing. When I think back to the performers I saw who had gone there, they had this ability to make something out of nothing. The school teaches that skill with a strong rigor. It’s about how to build a scene, a universe, write a script, a climax, and create a surprise at the end. It’s the science of building things that are invisible. To do it, you analyze human behavior and see it through different lenses. Each week, I felt like I was seeing a new world. It was an amazing experience.

Nicole: What does the application require?

Selena: It’s pretty straight forward. You write a motivation letter and send a resume. But my first year, there were 90 students to start and they might not ask you back at the end of the first trimester, and then they cut down to 30 students after the first year. The whole first year is an audition. So that part is harsh.

Nicole: How did you feel coming out of that process?

Selena: After school I worked to regain my sense of freedom, to not feel locked into the formality. Today, when I think about myself, I have a balance between the intuition and the formal training. Now, my work as a hospital clown is all improvisation. Recently, I’ve felt able to meld those two perspectives. I don’t lose sight of how to create a strong scenario. It’s in the back of my mind but I’m able to be present and free. I’ve studied with a lot of people since then, but most of the training I’ve done is connected to hospital clown work. It’s about fine-tuning things, like a theater muscle workout. The basic building blocks of my training are Pochinko and Lecoq. Those are the revolutionary ones, and everything since then has been coaching.

Nicole: What advice do you have for people who are researching clown school?

Selena: People need to know whether they want to perform or whether they want to expand themselves. If clown school is to expand your horizons, you might want a teacher who’s more generous and good at watching out for their students. Look for workshops and descriptions that excite you, and that sound like a caring environment. If you really want to perform, you should work with a teacher who understands the building blocks of clown and will help you structure your performances, pull out your best clown character, and push your limits.

Another approach is to seek out alumni of institutions you’re interested in, but which might require more years of training than you’re ready to commit. As the years go by, I really get the sense that great clown pedagogy comes from a specific lineage. I see disciples of clown masters I’ve studied with put their own spin on teaching, and I can see the lineages of pedagogy.

Selena recommends the following teachers and school as a resource for artists interested in the Lecoq tradition:

4 thoughts on “Clown School: An Interview With Selena McMahan”