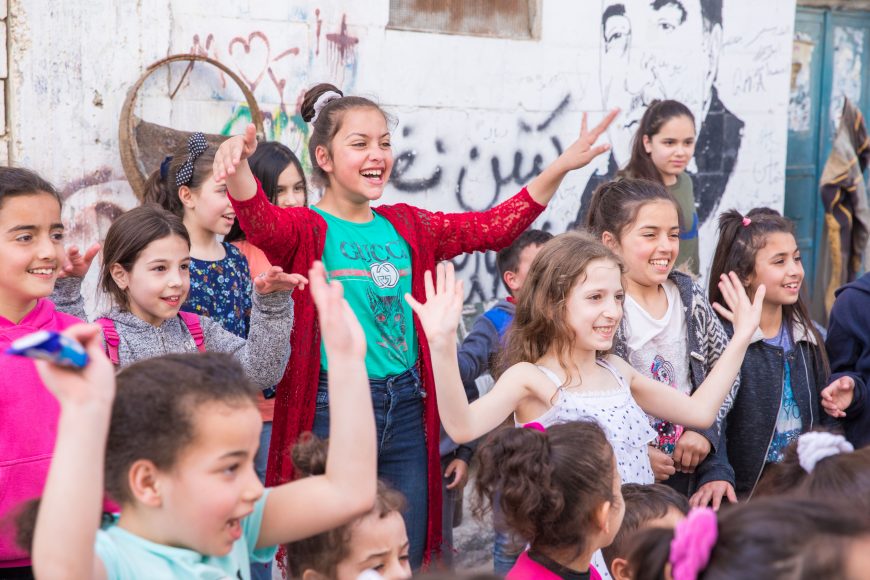 I used to know what my job was. I produced clown tours and workshops for displaced people, migrants, and communities in crisis. Amidst all of the unknowns and intangibles of that work, I knew what I was doing.

Since the coronavirus pandemic started, I have been less sure. Our objective is to inspire resilience through laughter. I am incredibly grateful to the artists, project partners, and audience members who have pioneered this transition to online programming.

So what have we been doing? It is my delight to recap the work and play of the past three months.

Lighten Up: Thirty-minute workshops open to the public.

CWB – USA founder Moshe Cohen offered 10 workshops, or “levity pauses,” to invite moments of reflection, play, and presence. Moshe created the series as a way to recognize, and honor, the challenges of coronavirus, specifically the challenge of staying in touch with one’s joie de vivre.

The Levity Pause was an invitation to be present. Instead of ignoring or covering up the challenge of isolation, Moshe invited participants to explore it. Each session opened with an awareness exercise. We explored feelings of being stuck, disgust, delight, and digital community, all with humor.

“During isolation due to the pandemic, 30 minutes each Tuesday pierced the darkness and brought me back some light. Thanks to Clown Without Borders USA, I was able to lighten the weight I’ve felt over my chest since March when I was “displaced” from my life. I learned to play and find the fun even in the use of a mask and disgust of the virus. Thanks to Naomi Shafer and Moshe Cohen, I stopped missing laughter. It was a relief to feel the remnants of those minutes’ chuckles for the rest of the week and to know that they would be there (on Zoom) next Tuesday. I don’t really have the words to express my gratitude. I know it’s what they do: ‘relieve the suffering of people’ and they do it without borders.”

Partnership With Diyar Theatre: Workshops for clowns in Palestine, Lebanon, Syria and Jordan

CWB has a three-year partnership with Diyar Theatre to provide clown training and capacity building for a cohort of 18 Palestinian clowns. While we are unable to continue with the scheduled intensive, we adapted the program to include weekly workshops for clowns in Jordan, Lebanon, Palestine, and Syria.

Mike Funt has previously worked with CWB in Puerto Rico, following Hurricane Maria. Mike travels the globe performing, directing, and teaching. While he believes that “at its core, clown is an analogue form,” he has built clown activities especially for Zoom. Each week, we take a moment to transform our spaces, and then dive into the work/play of creating an ensemble and exploring our individual clown.

Due to travel restrictions (that predate coronavirus), Zoom is perhaps the only room in the world where this workshop could take place.

Part of CWB’s mission is restorative narrative and raising awareness about the Right to Play, the role of clowns, and the lives of displaced people. We used live panel discussions and film screenings to address cultural humility, why laughing matters, and the early years of Clowns Without Borders.

You can watch the full series here.

We  planned to spend August in Ecuador working with Corporacion Humor Y Vida, an Ecuador-based organization specializing in clown performance  for  social change. Now, we’re making short videos in conjunction with a group of psychologists, to address how stress contributes to family violence and what families can do to prevent it.

We  planned to spend May in Mexico partnering with our dear friends at Llaven nü. We would have toured shelters for women and girls who are survivors of sex- and gender-based violence and human trafficking. By the time coronavirus forced us to cancel the in-person tour, the all-female team had already started devising a show to uplift and empower the audience while also honoring the trauma they’ve experienced. While we were not able to travel in person, Mexico-based artists Darina and Vanesa  contacted our partners to see if we could screen a performance.

We created a virtual clown show. Since the women in shelters are quarantined together, they are able to gather and watch as a community. We’re delighted to know we’re still laughing together, even if we can’t be together.