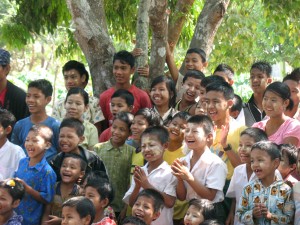 A world with clowns is a world of social conscience.

Many of us who are with Clowns Without Borders (CWB) enjoy a good suspense or horror movie. Tis the season for spookiness.

However, we’ve certainly noticed that modern pop culture has a fixation with clowns as evil, malevolent, or damaged. You’ve likely seen a few of the usual suspects: It, Poltergeist, American Horror Story. Even before Hollywood began maligning the clown reputation, Charles Dickens penned about an unsavory clown in his work, The Pickwick Papers.

Clown Compassion
The clowns that volunteer with Clowns Without Borders are humanitarians. They have undergone years of training, developing their skills and engaging in humane interactions. Our adept clowns use creativity, transparency, and openness to connect with people and create special moments where laughter can bridge past pain and journey towards resolution. They are not the caricatures slathered with scary-looking make-up, as frequently seen on television.

Our clowns are highly trained professionals who apply their talents for one of the most important humanitarian causes – helping children who are suffering as a result of crisis, catastrophe, or war. Our clowns are individuals who come together as a group and cross borders to relieve suffering with non-violence (Satha-Anand, 2001). For them, it’s always ‘We’ before ‘Me.’

Look, we’re not complaining and we’re not telling anyone to stop making horror flicks that involve clowns. However, we want to make sure that you are aware of the incredibly positive and meaningful work that Clowns Without Borders conducts, versus the dark deeds of clown characters played by actors on television. 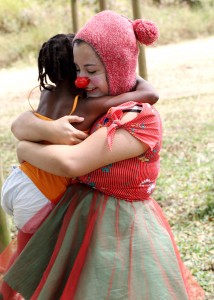 Oh, The Humor-anity!
Humor helps children adjust to their surroundings. Displaced children frequently experience many forms of stress which can lead to depression, and psychological effects such as nervousness for no reason, behaving aggressively, thoughts of suicide, and delayed cognitive development. Additionally, a child’s lost sense of humor is a trait measured by researchers surveying the impacts of life after crisis.

CWB clowns are non-medical Laughter Psychologists. When our clowns are invited to serve, they do so by making the audience snort, guffaw, giggle, and maybe even give children a view to a better and inspired world. Clowns help the children forget their difficulties and establish a place of safety where laughter and joy lead to unity and healing. We think of it as helping humanity, or humor-anity!

As you enjoy the Halloween season, with costume parties, haunted houses, and scary movies, just remember that pop culture’s portrayal of clowns as evil is nothing like the true nature of the professional clown. Especially the volunteers of Clowns Without Borders.

We love our clowns! If you do too, then tell the world. #ClownsRBenevolent