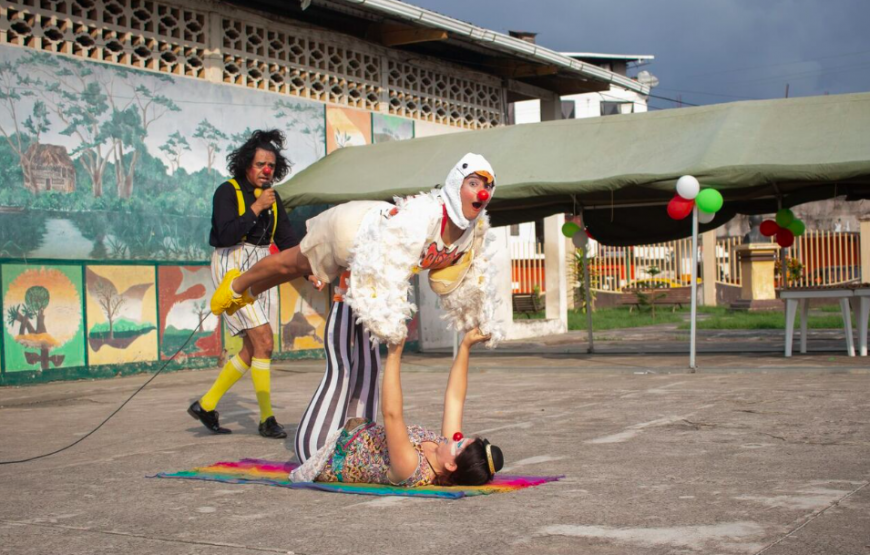 Hear from artists Josie Mae, Leora Sapon-Shevin, and (new board member!) Eric Rubin as they reflect on their First of May experiences—in this case, their first CWB tours! This interview is part of our Clowns In Conversation series, which lives on YouTube. The following transcript has been edited for length and clarity.

How did you first find out about Clowns Without Borders?

Eric: I’ve wanted to work with CWB since I was in embryonic form. I went to Ecuador in December 2019 for my first tour. I was with Josie and a bunch of other amazing clowns. It was everything I could have hoped for, and more.

Josie: I interned with CWB while I earned my certificate in nonprofit management. That was about five years ago, and I’ve wanted to go on a tour since then. My first tour was, as Eric said, in Ecuador.

Leora: I went to The Bahamas in December 2019 for my first CWB tour. I’ve wanted to be a clown since I saw a CWB video of a tour in Greece, performing for Syrian refugees. That was the spark and this trip was a real dream come true.

Can you share a golden moment from the tour?

E: Our last show was, by far, my best moment. Were touring in Ecuador and our final show was at a small home for Venezuelan refugee families. It was a beautiful little room with audience lining the walls. We had artistically melded by that point in the tour, and the audience was so alive and full of joy. We were still improvising and improving during this final show—creating new parts to see how they developed—and the audience had an incredible reaction. They couldn’t believe what we created in such a short amount of time.

J: My golden moment from the tour had to do with the creation process. We showed up in Quito and started throwing around all our skills, talents, and ideas. We created a show about migration, human rights, and dreams, and that was really relevant for our audience. It felt good to come together as a team of American and Mexican clowns and present something about community.

L: I toured to The Bahamas on a hurricane relief tour. Our first performance was at a shelter full of evacuees from islands that were destroyed by Hurricane Dorian. The shelter was in a huge gymnasium and we walked through rows of beds, handing out flyers and trying to get people excited about the show. People were a little hesitant, a little quiet, probably because we were basically walking through their living room. We went outside to the car and put on our costumes, and started singing and clapping as we wound our way toward the gym entrance. People started cracking smiles. Two men opened the doors for us and we were hit by this huge wave of cheering and applause as we walked inside. It was overwhelming joy, and it was in such sharp contrast to the reactions we experienced from the same people moments before. It made me think, “This is real!” The wave of receptive, rolling joy isn’t just in the CWB promotional videos. It was amazing to experience that switch and change.

What did you do to prepare for the tour?

E: You want to bring your best game. I was kind of the music guy, but Lars [Uribe, another clown on tour] also played music. Pretty much everyone could. That’s the thing, you think of yourself as “the music guy” but all the other clowns can play music and they can also juggle. It’s intimidating to be with such wonderful talent. I wanted to learn every children’s song in Latin America and wanted to get my guitar chops as tight as possible. I rigged up a speaker so I could carry it around with me and do some live looping and interviews with a microphone. You end up throwing out half of what you prepare and you figure things out in ensemble. You have to come with an open mind and be ready to collaborate.

J: I did a lot of research on the region and our partner organization, and tried to understand why we were invited. I started reading Learning Service, a book that talks about ethical volunteering abroad, and I did personal work toward dismantling that white savior complex that shows up sometimes. Upping my endurance by juggling a lot helped me feel confident I could consistently make it through three-show days.

Clowns Without Borders tours are so rewarding and challenging because they require all of who you are as a person and a performer. They require you to be grounded in yourself, culturally humble, curious as to why we’re going on tour, and able to process the privilege of travel and freedom of movement. –Naomi Shafer

L: I watched a documentary about Bahamian circle play, games, and music. I read about the history of the country and what had happened during Hurricane Dorian. I knew there would be so many variables during the tour and I wanted to trust that the work would show up. The other CWB artists were really experienced performers—it felt great to know that. I needed to be grounded before the trip, so I reached out to friends and family and set up times to check in.

E: It was all hard. When you’re on day eight and you’ve been speaking another language, driving ten hours a day in a bus…you get to a point where you don’t want to talk to anyone, you want personal space, you want to clean your costume, and you’re exhausted. But you’re in such a tight ensemble and you know you can lean on your fellow performers. You feel held. Also Naomi, you’re so attentive and you bring so much joy to this work. I’m grateful for this opportunity. Thank you.

J: It was hard for me to get enough rest. Especially on three-show days, when we had an hour in between and I was hot and sweaty, it was hard to take that time to rest. Travel and driving took a bigger toll on me than I was expecting. But we had wonderful moments with four clowns in a van.

L: There’s also a lot to process. You’re learning and there’s a lot of euphoria. I often worried if I handled interactions appropriately, but there wasn’t time to dwell on it.

What did you learn from your team?

J: Darina [Robles, CWB project partner and founder of Llaven Nü] said, “Believe in the yes.” Believe in the ideas you’re putting forward during show creation. That helped us make something in which everyone’s ideas felt included.

L: I learned so much from watching Meredith [Gordon] and Clay Mazing, two really experienced clowns. They both have such different tool kits available to them, so I would notice when they decided to bring different things forward.

What advice would you give your past self?

J: Find ways to hold on, decompress, and rest. Also, it all goes by so fast. Be present in each moment, in everything between the performances. Slow down.

L: You can’t know what you don’t know yet. I found that the hardest part of the tour was when it ended. It felt incredible when each day had purpose and I knew I was doing something useful alongside other people who share my passion. When that structure dissolved—when I wasn’t learning something new every day—it was so hard. I wasn’t anticipating that.

J: I was bawling my eyes out in the Quito airport at the very end of the tour.

What changed for you since your return?

Leora: I’ve found moments of entering into clown, especially during COVID-19 isolation, that have been such a source of solace. But there have been other moments when I can’t access it. I’ve worried about my income and my housing. I realized how important play is, and that sometimes you need help and guidance to access play when things feel overwhelming.

J: It has been important for me to create more than I consume. That creative process will come out even if it doesn’t feel perfect or right. Trust that it will flow and fall into place.

How can laughter be a tool for healing?

L: I’m still thinking over that question. The arts can help us synthesize and process the input we receive from the world, but we’re so overwhelmed right now. Our systems are laid bare. Clowning comes from a place of vulnerability and a desire to share that vulnerability. Right now, it feels like there’s nothing but vulnerability.

J: Initially I started to think about how every audience would have a different takeaway from your performance and show. It’s not necessarily the performer’s place to say what it is. During my juggling solos I might think, “Oh nobody’s laughing, I’m doing it wrong.” I realized that other emotions can come up, but we still have that place of laughter within us.