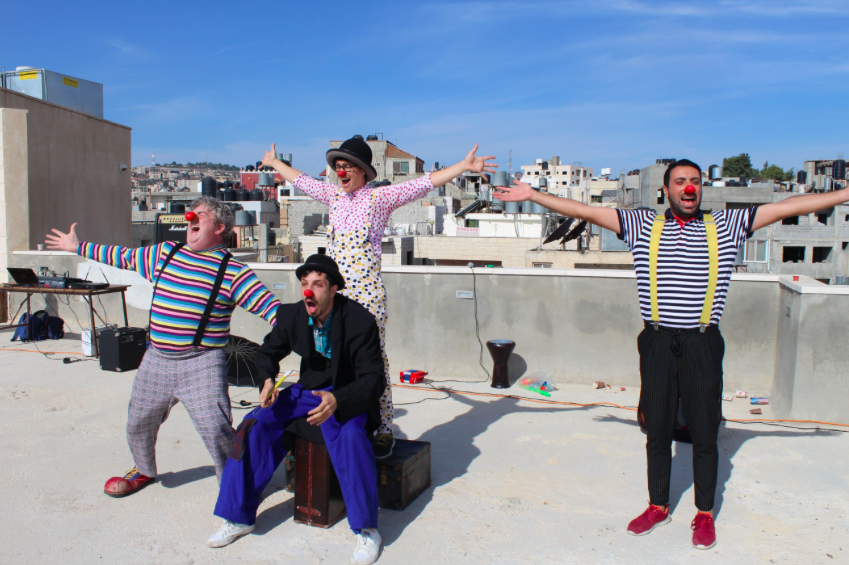 In the American circus, “first of May” refers to someone who is in their first season with the circus. In that spirit, we interviewed three artists about their respective first CWB – USA tour. This is the second in a four-part conversation, continuing our discussion with CWB – USA Executive Director Naomi Shafer and artists Dustin Allen, Melissa Aston, and Ania Upstill. Click each artist’s name to learn more about their tour.

CWB always works in teams. What did you learn from your team?

Ania: I learned a lot from Poki [the other CWB artist on tour] about listening and letting the process happen as we crafted the show. I’ve been working on listening since I went to Dell’Arte [International School of Physical Theatre] because I previously worked as a director and I have a very specific structure in mind. Poki is a wonderful listener and collaborator in that he’s much more willing to look at the flow. This was especially helpful when we worked in multiple languages.

Dustin: My team consisted of David Lichtenstein, an OG CWB clown, and Sabine Choucair, who runs Clown Me In in Lebanon. To quickly distill one thing I learned from each of them: Sabine showed me the power of entering a space. The moment she crosses the threshold, or even gets out of the vehicle, she brings energy. Her eyes grow to the size of the moon and she just radiates. We were told to watch out for the security guards, but they would laugh too. It was such a lesson in presence. David gave one of the most powerful performances I’ve ever seen. We were in Bosnia and he was really sick. We didn’t even know if he was going to be able to do the show. He was knocked out in the backseat of the car and when we got to our site, he arose from his state and put on one of the best individual performances I’ve ever seen in my life. The whole crowd was all about David for the whole show. They would only cheer when he entered the space. I saw this amazing resilience.

Melissa: My team was really varied and I had a lot to admire from each person. [Palhaços sem Fronteiras Brasil artist] Ana was our leader. She is an extremely capable person who played music for all of our acts and then ran to do her own act in between. That kept the whole show moving naturally. I was awed by that, the way she could switch directions. And then we had Faeble, who’s a wonderful American clown. He could come in and just take up the space, be present, and get everyone engaged with his character in just a look, or a laugh. He really knew how to connect with audience. Sorayla is a Brazilian clown who has a wonderful warmth about her, and the kids all knew her. She really connected with the kids in a way that made me admire her. We had one other person, Ricky, who was generous onstage, really giving a lot. He was someone who would perform a little bit and then run and take pictures. That back and forth isn’t something I could do.

What advice would you give yourself, or what do you want to remember for a future tour?

A: I think it’s important to talk to your team members about responsibilities and to set a check-in time. Make sure people are clear about who is doing what. Be aware that there’s a lot of emotional…people will have emotions about the things they see. These are situations that are not the easiest to witness. Try to allow yourself time to process. You’re going to be clowning and experiencing joy and laughter, and also feel sad and exhausted. Prepare yourself to be in that space.

D: It’s about not being afraid. Sometimes you really feel your privilege. In my experience, the audience members were happy to talk to us. They would ask us to tell people back home what was going on and asked us to share stories about their family, or their country, or their people. I spent a lot time being really self-critical, wondering whether I was good enough for them. A lot of people might say “Oh, you’re a professional performer so the stakes of the tour are probably a little bit lower, it’s a friendly crowd.” But actually no, it’s the highest stakes crowd I’ve ever performed for in my life. Know that people who are going through a hard time are giving you their attention. There’s pressure to make it worth their while; to take them away from what they’re going through as much as you can.

My job is to cast people who will treat every show like it’s their most important show. I need to make sure there isn’t an ego like, ‘Why aren’t we taking pictures of this show,’ or ‘Why isn’t there a program with my name on it.’ CWB seeks artists with skills, integrity, and also the humility and endurance to give each performance and audience member that care and presence. –Naomi Shafer

M: Communication is really key, especially when things come up. If they aren’t talked about or resolved in such a close-knit working environment, they can get more complicated. You should also take the pressure off yourself in terms of perfectionism. Of course you want to do your best, but that attitude can take away from the experience. It puts you in your head rather than being present within the environment. My advice is to look around and be more open. Remember self-care, taking care of the emotional aspects of touring. Make that part of a routine.

Do you view the news—and reporting about displacement and crisis—differently, now that you’ve experienced a CWB tour?

D: It’s been on my mind a lot because of the COVID-19 pandemic. I’ve looked for reporting on vulnerable people and how they’re being treated. It seems so dangerous and our audiences were already living in a dangerous environment. I promised myself that I would be more vigilant in standing up for displaced people and refugees. I want to seriously engage with people who are misinformed. The tour changed my mindset and my goals in a huge way, and I’m trying to find more ways to get involved with human rights advocacy, activism, and policy. Performing is not necessarily the most important part of the CWB experience, and it continues to shake me up to this day.

M: I’m a little stymied in thinking about that question, but it’s deep in my awareness. Before the tour, I didn’t have a clue. Even about situations of displacement in my own country. The experience makes me question how things are in my own country, not just faraway lands. The audiences we met live in fragile, volatile situations but they also have a strength and resilience to live in those tenuous circumstances. I had never thought about that before, what it takes to live like that.

Why does laughing matter?

A: I really think that laughter helps people deal with trauma. It breaks a cycle of anxiety and allows people to take joy in the moment, even under oppressive circumstances. We’re all feeling that now, with most people under some form of restriction. Of course that varies depending on where you are, but we can now see the importance of presence and joy in the little things.