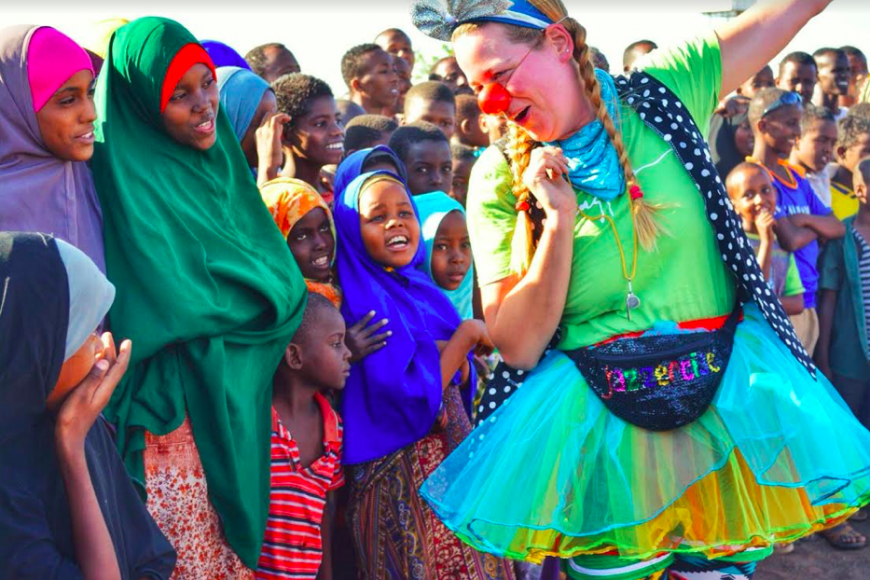 Whenever possible, we take engagements to share our work by giving workshops and presentations, like we did at the Smithsonian Folklife Festival and University of Virginia.

“When we give presentations, we share our favorite stories and we want to share some of them with you! Of course, the hour wasn’t spent just talking…we also did group juggling and even formed a clown band. As usual, we had our hands full with bubbles and instruments, so we forgot to take pictures!

The Stories We Tell:

Our story starts in 1993 during the Croatian War of independence. There was a group of school children in Barcelona who had been pen-palling with a group of children in a Croatian refugee camp. Our founder, Tortell Poltrona, was and still is a well known performer in Spain. The Spanish students received a letter from their penpals which said: ‘We’re OK, you know we have everything that we need, water and food, and we are safe for now. But what we really miss is having fun. We’d really like some clowns or something to come.’

The children reached out to Tortell and showed him the letter. A few weeks later, Tortell got in his car and drove out to the camp, and when he arrived there were hundreds of people waiting for him at the gate. He performed a show for over 700 children, and realized that there was actually a great need for clowns and entertainment in crisis situations. He went home, called his artist friends, and went back to that same camp a few months later. This was how CWB was born.

Fast–forward to 2017, and there are now 15 chapters of Clowns Without Borders International around the world. Naomi and I work for the USA chapter, which was founded in 1995.

Clowns Without Borders is a registered nonprofit which aims to share moments of laughter and levity with people in refugee camps, conflict zones, natural disaster sites, and communities in crisis around the world. We only go where we are invited. We work in partnership with individuals and organizations who are already trusted and working in the areas we visit. The artists we work with are professional performing artists who make their living through their craft, and who want to volunteer their time to perform for these communities.

It can be hard to understand the value of what we do, the value of the moment of levity for an individual in crisis. Our free performances and workshops are designed to bring together communities, and share moments where humor and relaxation are given a space to flourish.

Our shows encourage distraction away from the present crisis, offering the audience time and space to not think about it, thus decompressing and building resilience to endure.

People ask us: What does it look like when clowns go into a crisis zone? Our audiences are often made up of folks in the midst of crisis. They are a-stay-at-home parent whose home no longer exists; an engineering student whose university has been destroyed; a nurse who will never return to her country of origin.

What does it mean when these people are not refugees or individuals in crisis, but audience members? What does it look like when this is the face of an aid worker:

Every place that we go faces different logistical challenges. Sometimes we drive for seven hours to reach a remote town, or walk for miles when the road is too steep for a car. 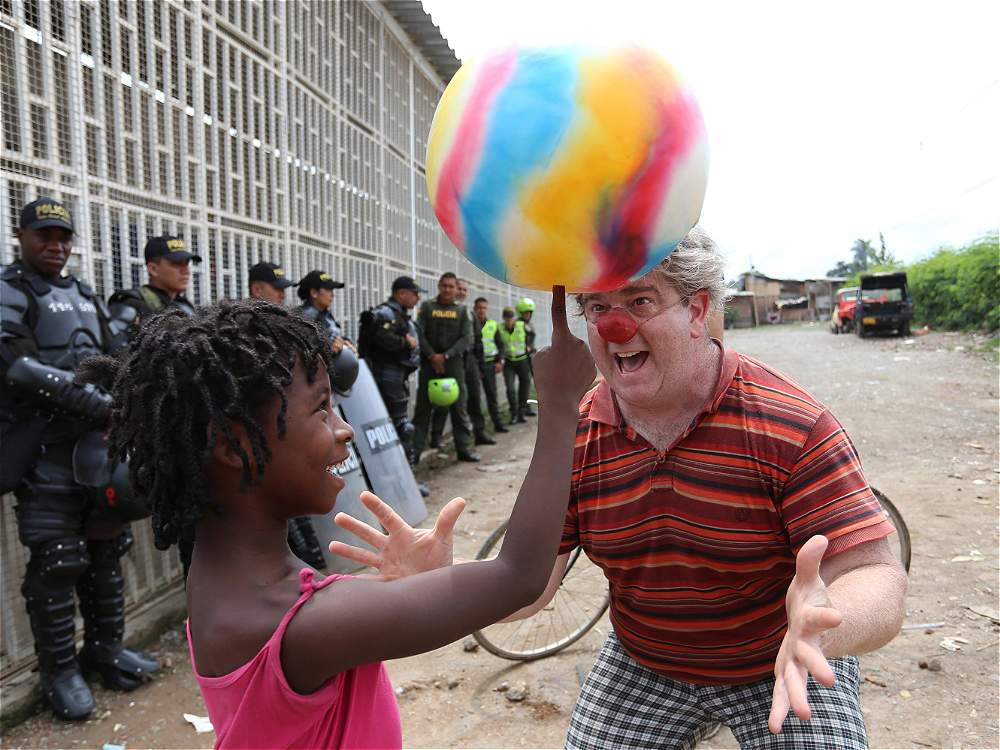 Our audiences also include aid workers and field staff, people struggling to make sense of displacement. We hear from these workers that our performances are the first time they’re able to stand side-by-side in community with the other residents of the camp. During a show, for a moment, the tension of resource scarcity can fade. During a show, laughter is abundant: Renewing and renewable.