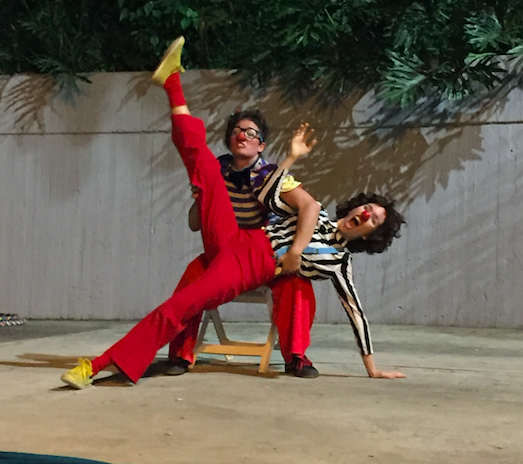 Do you ever wonder about CWB – USA’s amazing partners? We’re sitting down with project partners from around the world to talk about their organization and its relationship to CWB! Ilana Levy, founder of CaliClown and ClownEncuentro talks professionalism and forging her own path.

How did you start clowning?

I was 24 when I moved to Mexico and met hospital clowns. I was shocked! I didn’t know that this existed. For me it was the perfect job: service to the community, visiting the sick, putting on a costume and making fun of myself.

I volunteered with Bolaroja in Peru, as part of Patch Adams’ work. I felt very uncomfortable. I could feel the power of wearing the nose, of the audience looking at me, but I didn’t have the tools to be a clown.

So I started training. In 2010, I went to ClownEncunetro and met Barnaby King and Moshe Cohen. Meeting Moshe and learning about CWB blew my mind.

What I saw from Patch was volunteers doing something special. When I saw CWB and the commitment and professionalism of CWB, I thought, this is where I want to be.

Why did you start CaliClown

I couldn’t find anyone doing exactly what I wanted, and so I followed my impulse and created it.

In Spanish we say resignificar, which I guess you could translate as “redefine.” I wanted to redefine the role of the clown. In Cali we have clowns who work in the circus and clowns who perform on the street. We also use clown as a little bit of a bad word, for a politician or a kid who has done something wrong.  I want to resignificar the clown for other scenarios.

How did you start working with CWB

I knew that I wanted CaliClown to be professional and we knew that we wanted to take clowns to the community. Clowns Without Borders was the best group to help us do that. So I asked Moshe—and he came.

The first show we ever did was with Moshe. We were in a flavella on the mountains in Cali. I worked so hard with the contact to set it up. We had been there before, but just to play, not for a performance. We were so excited.

When we arrived, there was no audience. Not a single child. I asked our contact, Diego, “What happened?” He explained there was a shooting the night before, right where we were standing to do our show. People had been killed. People were scared because they didn’t know which gang the clowns were part of.

I was sure we had to cancel, and I said, “Moshe, we need a plan B.” But he said, “No No. No. If Diego says it is okay, We will do a parade. We will go to the houses and invite the children. They will join our parade and then at the end of the show we will make a parade and bring each child home.”

And so we did.

This year, CWB and ClownEncuentro tried something new: the workshop focused on techniques for “social clowning,” and participants created a CWB-style show to perform at a school. What did you notice about that process?

In all these years we’ve learned that volunteering is very nice, but to really make a transformation or really push a button in society, we need professional clowns. So many people tell me they want to be a hospital clown, but before you are a hospital clown, you must first be a good clown. And so that is what we try to teach at ClownEncuentro.

Hannah [Gaff] led CWB’s workshop, and together the participants created a show to perform at a home for girls in protective services.

It is so important to play and create as equals. We see in the group that people have different abilities and experiences, but Clowns Without Borders reminds us that we are equals as artists. It is something we never take for granted. That is the humanity that is the basis of humanitarian clowns.

And what about the mini-project after Clown Encuentro?

We had this crazy idea to create a totally new show and do a mini tour after the festival. There are so many great moments from it.

One woman said, “It was the first time my kid saw clowns, and she loved it,” and a girl said, “I’m afraid of clowns, but I wasn’t afraid of you.” Or at this place for kids who live on the streets, a teacher said, “I have never before seen the kids sitting down and paying attention for a full hour. They really connected to you.”

Maybe one of the best parts was the audience response to one of the acts. In the act, two clowns have a picnic, and one clown throws her trash in the ocean. Then, the other clown is supposed to get mad. But before the other clown could act, the audience would. Kids would get up, pick up the trash, and scold the clowns. Even my daughter, who’s two and a half years old, got up. It was beautiful to see.

What’s next for you and CaliClown?

Taking a training in Waldorf pedagogy for emergency intervention. The idea is to start teaming up with social workers so that we can bring the clown interventions a bit deeper and to start thinking of projects where we can do a long term impact!