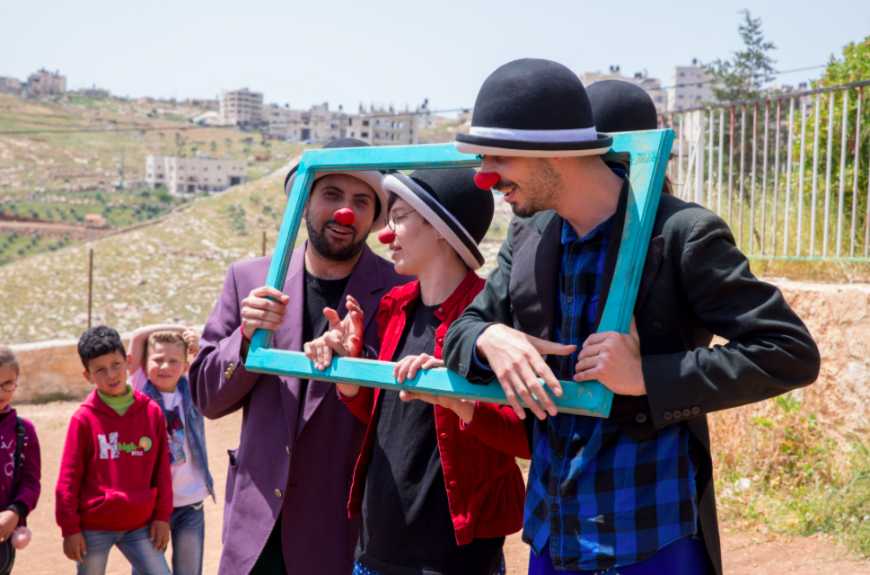 Naomi Shafer and Nicole Loeffler-Gladstone wrote this blog post. Learn more about our programs in Palestine, here and here.

We frequently answer the question: “Why does Clowns Without Borders write ‘Palestine’?”

Our standard response is: CWB – USA follows United Nations naming conventions for all countries, nations, and territories, along with the Convention on the Rights of the Child and the Universal Declaration of Human Rights.

This is true. But it is not the full story.

Designations and names specify or homogenize, depending on who does the naming. That’s why CWB considers international human rights standards alongside community self-determination.

Clowns Without Borders follows our partners’ lead, upholding our mission to be in solidarity with the communities we serve. This means using the language they use to describe their own experiences. It means believing that people are experts on their own experiences. In the case of Palestine, it also means following language accepted by the global community.

True, our thoughts are with our partners in Palestine. They are indeed in extreme danger, as we wrote on our social media channels. But occasional statements of support belie Israel’s ongoing, systematic, colonial project. Our Palestinian friends and colleagues describe their experience as apartheid, and so must we. (Incidentally, Human Rights Watch agrees.)

CWB often says, “We go where we’re invited.” We use this to explain how we plan tours, meaning CWB doesn’t choose where a tour should take place. It also means we listen to communities and respond to their needs. Our project partners in Palestine are inviting the world to step into this conversation. We will do our best to honor their invitation, to amplify their voices, and to be part of their journey towards overcoming injustice.

Why did it take us so long to get here? We feared accusations of partisan politics and anti-Semitism. We were silenced by our fears, but they’re unfounded.

Non-profits risk losing their 501(c)3 tax exempt status if they engage in partisan politics, such as campaigning for a specific politician:

CWB – USA maintains that human rights are a nonpartisan issue. Allowing people to self-describe is not “political advocacy.” It is basic humanity.

Palestine Is a Place

The United States and Israel are both settler-colonial projects (the treatment of Indigenous people by Brazilian ranchers can also be considered settler-colonialism, among other global examples). Settler-colonialism describes one group’s attempt to erase and replace an Indigenous population. This erasure happens through a variety of tactics, including physical and cultural genocide, obtaining and controlling land, and promoting assimilation.

In United States history, settler-colonialism encompasses the concept of manifest destiny, the federal government’s pattern of broken treaties, the cultural mythology of “the vanishing Indian,” and more. A “vanished” Indigenous population makes settler presence convenient, if not ordained.

The Palestinians don’t exist in people’s imagination. They’re an abstract thing. And for many people, they don’t exist at all. They don’t have a right to exist. They certainly don’t have a right to tell their stories. And anything that we say is immediately – anything that’s said in terms of the Palestinian narrative is immediately thrown into doubt. –Throughline, NPR

Palestinians did not choose their experience, which includes internal displacement, international refugee status, unequal treatment in their homeland and abroad, and constant threat of violence. They did not choose to vanish from an historical understanding of the Middle East. But they can and do choose to name themselves.

Demanding self-determination interrupts a settler-colonial narrative which insists that colonial projects are in the past, rather than ongoing structures of oppression, subjugation, and dispossession.

What does it mean to engage the assertion that settler colonialism is a ‘structure not an event’? One obvious case is the Nakba as an ongoing process—rather than an isolated historical moment of catastrophe marking the 1948 Palestinian exodus, when Jewish Zionists expelled more than 700,000 Palestinian Arabs from their homes and homeland during the war that forged the state of Israel.13 In North America, there are numerous attempts to remove indigenous peoples from their lands for corporate resource extraction ranging from oil to minerals and water, causing environmental devastation with genocidal implications. –Lateral, Spring 2016

How can Clowns Without Borders USA support its Palestinian colleagues in their resistance to ongoing settler-colonialism? One small way is to believe that Palestine is a place, not an empty or unnamed land. If Palestine is a place, then Palestinians must be a people and their human rights must be respected. This is why CWB – USA writes “Palestine.”