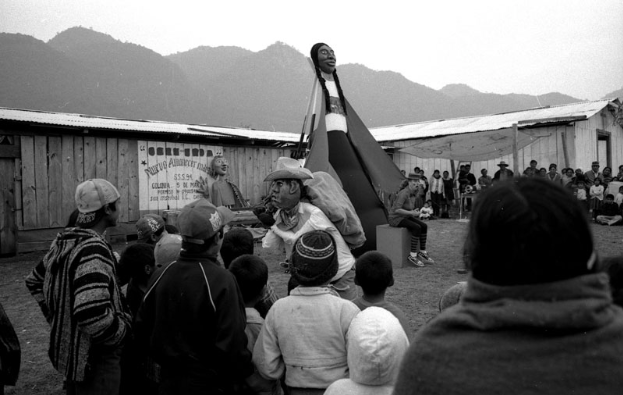 “From Tila we head to Cantioch, to perform for 300 people in the midday sun. We spend the afternoon trading songs, eating rice and beans, and talking politics with the local men. We’re sent off the next day after a group sing-a-long of the Zapatista hymn.”

Moshe Cohen and Robbie Pino collaborated to bring puppetry and clowning to Chiapas. Between April 10th, 2000 to April 29th, 2000, the two clowns plus a documenter and musician (Jaime and Caroline) traveled to various Zapatista communities in the Free and Sovereign State of Chiapas. Throughout the 1990s, Chiapas was under constant military pressure from the Mexican government. By the early 2000s, the Zapatistas enjoyed greater global support, and Mexico’s changing presidency took a less militantly repressive approach. However, the Zapatistas remain in a declared war against the Mexican government to this day.

“Our guides honor us by telling us that they had been more than a bit skeptical about bringing a bunch of gringas to the communities. They had thought it a ridiculous waste of time, an idea that would only serve to make us Americans feel better. On the contrary, while traveling with us they had seen the people open up their hearts like never before. It is a great gift to know that our guides, who are working hard within the movement every day, have seen the transformation and healing power of laughter first-hand, and have been changed by it.”

Clowns Without Borders USA has a long relationship with the Free and Sovereign State of Chiapas, largely thanks to connections built in the late 1990s. CWB – USA founder Moshe Cohen collaborated with many Mexican artists and activists to bring clowning and levity to the people of Chiapas, following the 1994 uprising.

In 1997, the Caravana de la Risa tour helped lay the foundation for the workshops used during this tour. In 2000, Moshe collaborated with Wise Fool New Mexico for a second time, bringing along another artist and a documenter to complete the team.