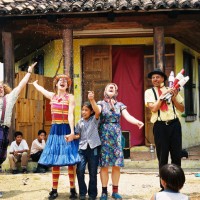 “A powerful place to begin the tour, as the Pillar of Shame statue stands above the community. The statue was erected after the 1998 massacre where 40 people were killed by Paramilitary. I noticed that near the statue of twisted, agonized faces and bodies, there was always a few men spread along the one road watching. They were not armed, unless they had their machetes, and most were in the traditional clothing. They were there, purposefully watching. This sums up my observations about the situation in Chiapas at present. The Indigenous people live by subsistence farming on steep mountain plots, in a lifestyle not unlike they have for hundreds of years. Yet, they know how fragile their existence is, and that not only their lives, but their town, their culture, their language, could be wiped out in a snap. They do not want to sell out to progress. They are strong, self-determined, and committed to staying on their land. They are watching-literally, everyone who comes and goes carefully. They want to be visited by those who support them.”

Zoom in on this map and go to street view right where the marker is, and you will see the Pillar of Shame.