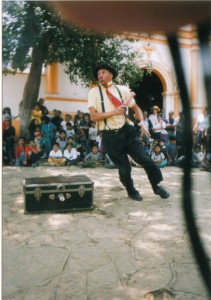 I am here once again in this dream place called Chiapas, standing in the middle of the road with my clown suitcase. If I squint my eyes I can pretend that the military campground and its soldiers with their shiny black automatic rifles are not really there. That the furrowed brows of the indigenous men as they look over their shoulders is just what happens when you look into the sun light.

As I open my suitcase all eyes are upon me. Small children with bare feet and dirty faces, the Traditionalistas dressed in their red, black and white traditional clothing, a group of women all standing together giggling behind their colorful embroidered shawls, the PRIstas with their new cowboy boots and white starched hats, and of course the young soldiers with their rifles pointed downward. A very diverse group of people divided by political, patriarchal and social ideologies.

I begin my show by acting like a chicken. The children are the first to laugh, the first to drop their guarded attitudes and tough exteriors and open up like an exotic plant that just needs some water. After ten minutes this circle of divided peoples has become a blur of laughing faces. For a brief moment they have forgotten to be bitter enemies and factional rivals. Instead they are friends, neighbors and relatives. A community all sharing in an afternoon of juggling chickens, disappearing scarves and rubber noses.