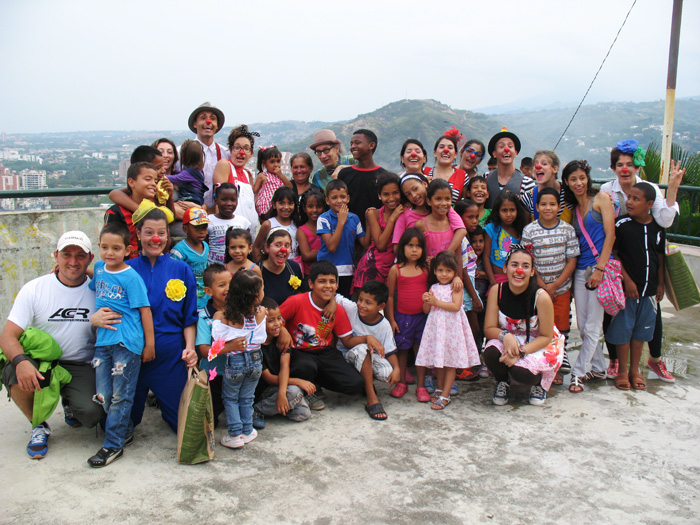 CaliClown is a young clown troupe in Cali, Colombia’s third largest city, population 4 million. They are a non profit of volunteers engaged in hospital clowning and educataion and are expanding the impact of the work of clowning to the displaced populations in and around Cali. In keeping with this goal, Moshe Cohen, Founder of Clowns Without Borders, USA, traveled to Cali, from April 8th to 16th, 2013, to work with the team growing their cultural and social impact. Another objective is develop ways to bring laughter to the children in the cities difficult neighborhoods, and eventually in the conflict zones near Cali.

Colombia has the world’s second highest number of IDPs (Internally Displaced Peoples) : 4 million people. This is due to the ongoing 50 year old civil war much complicated in recent years by narcotrafficking, paramilitary and gang activities. Many of the displaced have taken refuge on squatted lands in and around Colombia’s major cities and towns. Communities have developed in favella style where neighborhoods are controlled by gangs, and territorialism is marked by violence.

This project called for a conversatorio-a public talk/presentation , a workshop, a show in Siloé and a visit to the hospital.

The convacatorio in the small 80 seat theater “Esquina Latina” took place on Tuesday April 9th to a packed house, with many people turned away from the free event. Moshe offered a 30 minute show, a 30 minute slideshow/ presentation of Clowns Without Borders work, and then a 30 minute question and answer session. The audience was very enthusiastic about the work and there was a hat pass for Cali Clown at the end of it. Big success.

The workshop took place at the downtown Centro Cultural over 5 days, with 12 participants and Moshe teaching. The workshop went very well, all digging in with great enthusiasm and a lot of laughter. There were two lines of activity, developing the volunteers’ personal clown worlds/capacities and creating a show to perform on Sunday in Siloé.

The show in Siloé on Sunday afternoon went as well as it could, given the circumstances. Caliclowns partners in organizing the show, a community organization, provided transportation and accompaniment to the location, an outdoor cement amphitheater at the top of the hilltop community. Attendance to the show was complicated by a shootout that took place the night before, and therefore many of the residents didn’t wish to leave the security of their houses, and many above the amphitheater watched from barred windows. The Clowns did a passecalle (parade) up and down the hill, on narrow walkways to announce the show, and invite the residents to come see. Many incredible and touching moments happened along the pathways, the clowns trying to coax the residents to leave the safety of their residences. In a neighborhood where anyone walking by is viewed with fear and suspicion, to see a clown waving and sending showers of soap bubbles in their direction proved to be a very significant and cherished moment of levity for the residents.

30 minutes later, the completely empty amphitheater was at least partially full. The show was a mix of processional clowning, Mc’ing by Ilana and Connie with a wonderfully absurd running Magia (magic) gag, and a series of clown numbers that had been created during the workshop.  There were about 70 children and adults in the audience, and laughter was flowing throughout the show!

The hospital visit the next day, Monday morning, at the Hospital Universitario del Valle HUV, was set up as a show in the courtyard with children, parents, nurses and doctors (about 100) attending. Connie, Ilana, David and Moshe created the performance using numbers from the show the day before. The show was extremely well received, many children and hospital staff full of laughter. There were many gifts from the clown gods in this semi-improvised show offering great moments of spontaneous hilarity. It was clear during the visit that CaliClown has established a great presence at the hospital and that there work there is extremely well appreciated.

As CWB looks for ways to involve local artists in their projects, this model of capacitation is worthy for future projects. There is a clear need for Clowns Without Borders type activities in this region, and thus to help young local clowns develop their abilities is a good road to follow that will, in the long run lead to more laughter!