Continuing an ongoing 5-year collaboration between Clowns without Borders USA and Colombian clowns, the team of 5 Colombian and American artists taught workshops and performed to kids, students and families in villages in both Bogota and rural areas around Cali Their show was called, “Oink”; photos by Ana Maria Cuevas Escobar.

It’s hot in Cali during the day but always in the evening there is a fresh cool breeze.   In Colombia one of the first things you notice is everyone greets you, when making eye contact, in line for the bathroom and going through customs, you feel welcome.    The waiting area for pick-up is outdoors in the fresh crisp air, at the tail end of a long NYC winter I was thrilled to remove my boots, and jacket and late in the evening and was picked up Ilana (from Cali) and Derrick (From San Diego) at the airport they had met for the first time the evening before and I was meeting Derrick for the first time and reuniting with Ilana after our July 2013 Mission.  We started our evening with a café at the airport.   As with type of work there are lots of late night talks –discussions about what we are doing and why with the work, clown in general and our lives.   I guess it is part of the way we bond and are able to come together in a short amount of time.   Ilana is a performer and director of CaliClown ,   Derrick is a highly skilled street performer and  former student of he Clown Conservatory in San Francisco. I am on my third CWB trip, and have worked as a hospital clown, gig-ger,  and theater clown since 2000.

We were up and out early to head to Finca Guadalajara the farm of Connie’s family about an hour outside of Cali.   Here we have comfortable rooms, beautiful rounds and a large dance floor to develop the show and rehearse!   One the way out we pick up and Derrick and I meet Jaime (from Cali) who is embarking on his first show, he has been working in hospitals with Cali Clown and doing public events.   We met Wilmar and Connie at the farm- they were both a part of the July 2013 trip-in fact they met on that trip and now live together on the farm with a little clown on the way.   Connie is the other director of CaliClown and also a performer; Wilmar is a seasoned touring performer.  It was a very happy reunion, and meeting for all of us.  We settled in, had some lovely food and got to work.   We walked through the game plan of the missions, and the groups we would be working with and performing shows.  We talked about show concept scene ideas, shared our props, laughed, played games, showed skills and got to know one another as people and clowns late into the evening.

All work and no play is not possible for clowns –

Up bright and early, Derrick leads a physical warm up and we worked on partner acrobatics seeing what we could all do together and planning an acrobatic finale.   We worked on a story and how we could tell it through skills and scenes- a show that was not just a circus cabaret but developing full story.  Connie was not performing with us but dropped in frequently for encouragement and sat through a final run as an outside eye.  We worked and re-worked our material and had to cut back – we had developed a show longer that an 1 hour and ½.   We cut numbers from the show and tried to not talk about the show or the plans, but ended up playing and talking until later in the evening. 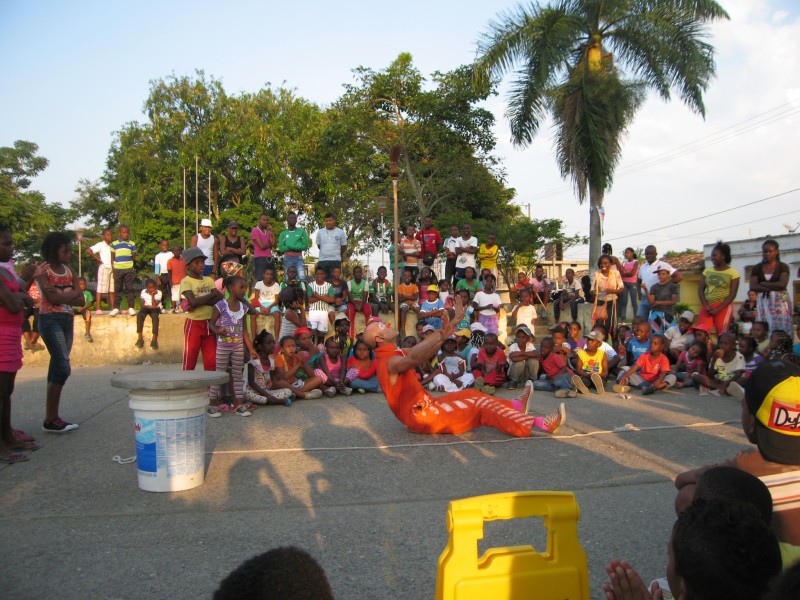 We open in the afternoon; we are up early running through the show again, eating quickly.   We are running a little late, perhaps a bit of unconscious dragging of the heel- there is a bit of tension/nervousness – as to be expected.   We get ready by putting on costumes and make-up on and (sunblock and lots of bug spray), loaded up our little red jeep, and heading out for our first show.   Driving through the country-side the heat is high but the breeze of the open jeep keeps us cool.  And then suddenly the jeep chugs to a stop.   We have burnt through some kind of cable.  We call the farm but it will be a while before they arrive.  We are closer to the village than the farm.

So we hop out of the jeep, thumbing for a ride… and pretty sure that it seems like a practical joke.  People drive by and wave and honk.  A couple of buses pass us by and finally, one stops for us, because the organizer of the show was on the bus, running late.  I can’t believe we and our props actually fit but we do and despite the heat and the extreme overcrowding we receive smiles and a warm welcome.   Less than 10 minutes later we step off the bus where a large group of kids are looking dejected maybe thinking we aren’t coming.  When we step off the bus there is a wave of emotion, joy, surprise and we start playing even as we are determining where the show will be.  We play the show to the village kids of all ages and adults, afterwards we hung around and played some more.

As somehow it always seems to happy, what at first seem like trouble for the clowns provide the opportunity for the perfect entrance- what a great way to start the project!