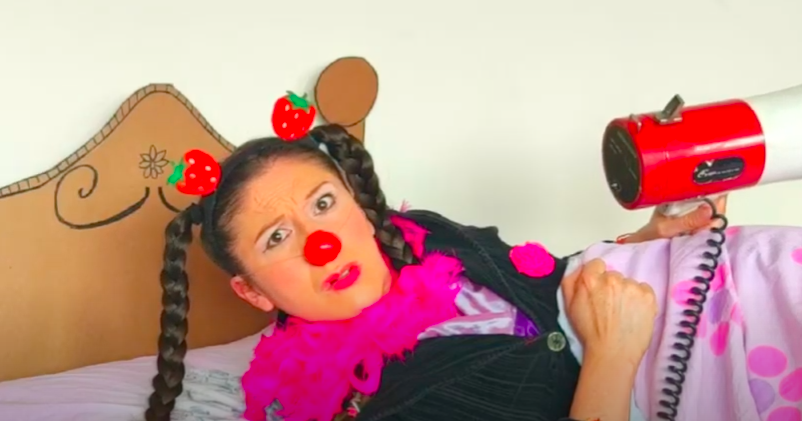 “COVID-19 made us eager to collaborate within the screen. We came together from many countries to make this project possible.” –Paty Galarza

Ecuador 2020: Prevention of Violence Against Children is a first-of-its-kind program from CWB – USA and Corporacion Humor Y Vida. We co-created and released a series of Public Service Announcements addressing violence prevention, including family violence, stress, and sexual and gender-based violence. Each short clown film opens up conversation about sensitive issues.

CWB and Corporacion Humor Y Vida are working closely with a team of Ecuadorian psychologists to ensure each film is culturally competent, dovetailing with existing programs. Social service agencies in Ecuador will share the videos and they’re also available to online audiences via CWB – USA’s YouTube channel.

This project is part of a psychosocial campaign for Ecuadorian communities affected by COVID-19. Corporacion Humor y Vida conceived of the project and invited CWB to join.

Play and other psychosocial activities are vital forms of resilience and self-expression during this difficult time. Families and children need to laugh and play together, and they also need resources to address family violence exacerbated by the effects of COVID-19. Virtual connections across social media, online platforms, and traditional news sources have become more vital than ever.

This project is a collaboration between Corporacion Humor Y Vida, Clowns Without Borders, and a group of psychologists who are part of the project Recreando Lazos Sociales (Recreating Social Ties). Many thanks to Graciela Ramí­rez (Ecuador), Cristina Amaguaña (Ecuador), Erika Villamarí­n (Ecuador), Katiuska Villací­s (Ecuador) and Michelle Carrillo (Ecuador).

Paty Galarza (Ecuador) and Shana Cardenas (Colombia) are the founders and directors of Corporacion Humor Y Vida, a social clown organization in Ecuador. Paty’s work specializes in using artistic strategies for facilitation and program design to address sensitive issues such as preventing gender violence and bullying, social inclusion, and human rights. She is trained in Theater of the Oppressed, Forum Theatre, community theater, and theater for development. Shana holds a Masters in Performing Arts from the Academy of Arts, Bogota, Colombia. She has performed and taught worldwide.

Santiago Bello (Colombia) joins CWB – USA for the first time, as each film’s editor and artistic director. Santiago is a performer, filmmaker, and founder of the social circus school Circo a Toda Costa.

Carolina CoiCoi Duncan (Colombia) has performed with CWB on three tours in Colombia and El Salvador. She has also performed with Ringling Bros. and Barnum & Bailey, Zoppe Family Circus, and Dreamtime Circus, among others.

Eric Rubin (USA) has worked in Ecuador with both Corporacion Humor Y Vida and Clowns Without Borders. He introduced the project partners and has served the team as a logistician and translator.