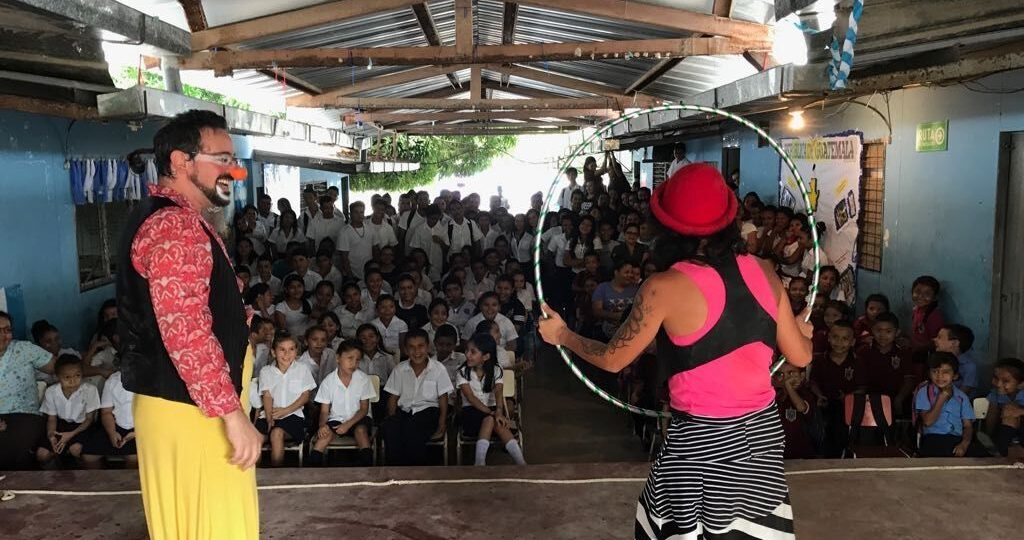 “I realize just now that behind all the shyness from the first few days of the workshop, their eyes and ears were wide open.”

Clowns Without Borders USA and Clowns Without Borders – Brazil partnered for a tour to El Salvador. This tour was CWB – Brazil’s first international project, and was in collaboration with local organizers, The Ministry of Health Psychosocial Support Programming and ADES (Cabañas region). It was designed to share smiles and joy with communities affected by gang violence. This tour was a continuation of programming from our El Salvador trip in 2016, and we were excited to continue building relationships with our project partners and local communities.

This project was held in two primary regions: San Salvador and Cabañas, near the Honduran border. We were excited to work with the Ministry of Health during nine days of performances and workshops in the capitol, followed by five days of performance in partnership with ADES.

The root of El Salvador’s disruptive gang violence stems from state sanctioned apartheid, which began in the 1970s. El Salvador’s government and military engaged in a bloody civil war with guerrilla factions. This occurred during an era when U.S. foreign policy concerned itself with halting the spread of communism.

The project team was made up of three Brazilian clowns and two American clowns: Noah Veil, an experienced CWB artist, and Carolina Duncan (CoiCoi), a new CWB artist. Noah is a world-class physical theatre performer, parkour coach, and artistic director of his company, DreamAwake Prod. He has worked with CWB on three past projects (South Sudan, Nepal, and Bangladesh). CoiCoi has performed in circuses all over the world, and made history as the first Colombian-born female clown to join Ringling Bro’s.