Clowns Without Borders USA is fresh back from a trip to Guatemala. This trip was launched with the idea of bringing smiles to children and adults in the communities most affected by torrential rains and mudslides caused by Hurricane Stan in October 2005. Clowns Without Borders is an International organization that brings laughter and relief to people affected by war and disaster all over the globe.
Over 1,000 people were killed in Guatemala, mostly by tremendous mudslides that drowned houses and whole villages. Rebuilding and replanting are still very much in progress in these poor indigenous villages and many people are still on emergency food aid and in temporary housing.

We performed in Guatemala everyday from January 6 through January 18, 18 shows in 13 days, entertaining over 6,000 people in extremely poor communities. We had a schedule targeting the communities most affected by the hurricane, many of which are very difficult to reach.

Three clowns make up the team, David Lichtenstein, an experienced CWB performer from Portland, Oregon, and two performers new to CWB, Sayda Trujillo and Shea Freedom Howler. Sayda is a Guatemalan-American; we used her Grandmother´s house in the country, where Sayda went to grade school, as a place to rehearse our show for two days. Shea had never been out of the USA before. Our first show was in the Tiutjil speaking aldea of Panabaj, in Santiago de Atitlan. There, on October 5, 2005 at 4:00 in the morning, a giant mudslide originating thousands of feet higher on the Volcano Atitlan buried much of the village, killing 80 people, most of whom are still buried under the mudflow.

We performed on top of the mudflow that had buried 80 people, at the top edge of the refugee housing. There were over 300 children, plus many parents. The show was made difficult by strong gusting winds that swirled the volcanic ash of the flow all over us, up our noses and throats and in our eyes. The children were rather rather wild. Although they loved the show, many threw rocks at us throughout the show.

Others grabbed at our props and we had to stop the show to move the crowd farther back. One woman told us that it was the first time she had seen the children laughing like that for months. It was an extraordinary experience.

We were also able to visit (and bring supplies for) a farm run cooperatively by 70 families of the village. Several villagers are graduates of the animal husbandry school run by CAPAZ. Their entire animal raising operation and coffee processing area were buried in 5 feet of volcanic mud, killing all animals and losing much of their crops. They have already heroically dug all the most essential parts of the farm out from under more than mudflow by hand, and Pieter has found donations to replace some of their animals. Unfortunately it is not possible to grow anything in the volcanic sand and ash of the flow. 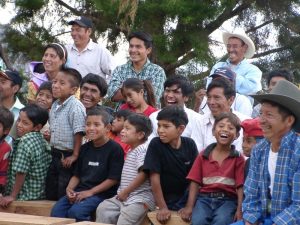 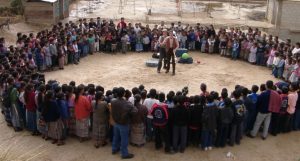