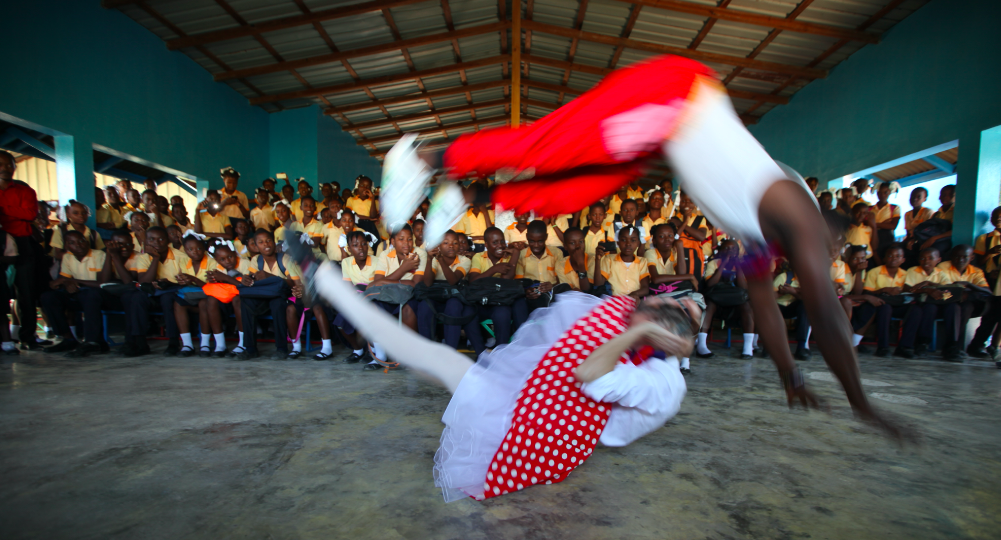 “Three of us stay after a performance to play with the audience. A young boy challenges our lead b-boy to a breakdance battle. After a full song of building tension and raucous applause, Fritz (our b-boy) lets the young boy win. It results in a wave of uproar and cheering from his comrades. It’s a wonderful moment of solidarity, Creole hip hop and death drops.”

This team performed in Haitian prisons for women and minors. They also worked with Aksofam: (Association de Femmes Bénévoles Venant en aide aux Femmes et Enfants Esclaves), an organization that works with women and children who have been enslaved.

In 2014, the United Nations’ Human Rights Committee reported a steady increase in sexual and gender based violence. In 2017, CWB – USA partnered with MSF-Holland’s program against SGBV. MSF reports that over half of their SGBV patients are under the age of 18.

This tour strived to bring moments of laughter to women and young people who have experienced violence.

The team hailed from Canada, Haiti, and the United States. James Saint Félix (Haiti) is the founder of Cie Lobo, a program in association with the national arts academy of Port-au-Prince. Montana Debor (USA) is a circus artist and instructor based in Atlanta, Georgia. She has worked with CWB – USA at a number of benefits and at the Smithsonian Folklife Festival. This was her first international tour with CWB – USA. Katel Le Fustec was the coordinator and photographer for this tour. She has been the director of Clowns Sans Frontières – Canada since 2008.