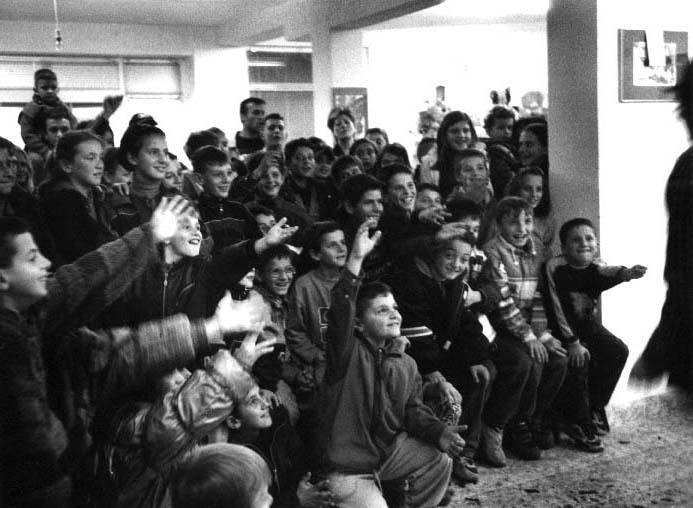 Payasos Sin Fronteras/Clowns Without Borders project in cooperation with the Danish Refugee Council.

Pictured above: Tortell & Moshe perform in a basement in Mitrovica.

The Situation
Kosovo/a is governed by the United Nations (UNMIK) with Nato (KFOR) using a strong military presence to maintain calm between the Serbian and Albanian populations. There is also tight surveillance by a large international police force. There are policeman, not to mention soldiers, from every part of the globe participating in peacekeeping activities in this tiny country (somewhere around 100 by 100 miles). The political outlook is very unclear. Press analysis gives Serbia’s new leader leaning democratic enough sway to keep Kosovo as part of the Serbian republic. Mr. Kouchner, the UN head of government, said in an interview(paraphrased) that this was unrealistic. Most Serbian Kosovars live in the North where several municipalities are declared Serbian and Albanian Kosovars control most of the country, for simplicities sake referred to in this report as the South.

The animosity between the Serbs and Albanians remains strong. The division is visibly guarded by scores of KFOR troops and armored vehicles. In Mitrovica where we were located, the French troops control the famous bridge where the Serbs and the Albanians had been pelting rocks across the river at each other. Things have been calm there for the past two months despite the occasional grenade launched across the river. There are numerous military roadblocks on the roads and KFOR units stationed at any potential hotspot be it Albanian enclaves in the North or Serbian enclaves in the South, the borders between the Northern Serb provinces and the Southern Albanian provinces. KFOR continues to protect Serb churches in Albanian Kosovo with sandbagged bunkers and tanks. The conflict is far from over.

Starting Friday Nov 10th (or thereabouts), country wide demonstrations took place daily with 12 to 3 work stopages and road blocking activities in the main town centers. We found out about it coming back from a show to see a turned over burnt wreckage of a KFOR jeep. Turned out to be a Russian vehicle that the demonstrators took over thinking that a Serb was hiding in the backseat, chasing out the two Russian soldiers but finding no Serb. Mitrovica has a sterner populace than the other cities in Kosovo/a and they have a work stopage the third day from 8am to 8 pm while the rest of the country maintains a 12-3 pm schedule. The demonstrations began on the steps of the National Theater in Pristina where the mothers of some 800 Albanian prisoners held in Serb prisons vow to sit-in until the prisoners are freed. The rest of Kosovo is demonstrating in solidarity with this protest.

The Serb population we encountered seemed under a cloud of sadness. The general mood in the North was subdued. The Roma/Hashkalia/Egyptian (gypsy) populations are in the worst situation disliked by both Serbs and Albanians. Language is of primary importance in Kosovo/a. It is dangerous to speak Serbian in the Albanian areas and vice versa. Taking Serbian dinars (currency) out of your wallet in the Albanian part of town can be a major snafu.

Humanitarian aid is operating at gigantic proportional economic levels infusing Kosovo/a and Kosovars with huge levels of employment and money flow. A good percentage of the houses destroyed are now rebuilt or in the process. Huge black window holes from fires and destroyed houses are still found easily but do not dominate the landscape as they had last August (1999). There are over 400 Humanitarian NGOs’ in the capital Pristina. There are 100 international organizations active in Mitrovica. Large numbers of white 4 wheel drive vehicles with organization logos are visible everywhere. The language on the humanitarian street however is that Serbia is the new place that will be rebuilt, and many agencies are busy establishing themselves in Belgrade.

This trip to Kosovo was in conjunction with a two month cooperative project between the Danish Refugee Council and Payasos Sin Fronteras. The main thrust involved two PSF animators, a circus artist (Leo) and a social psychologist(Maria Jose), conducting workshops with teachers and activists in two divided towns, Mitrovica and Pea ( in Albanian or Mitrovice and Pec in Serbian). Tortell Poltrona and Moshe Cohen (the clowns ) travelled for the last 10 days of this project to perform in various communities of Kosovo/a. The clowns performed in Albanian, Serb and Roma/Hashkali (gypsy) communities, almost always separately. The performances took place in cultural center theaters, collective centers (refugee camps) , communities and once in between immense olive green tents serving as schoolrooms in Cabra.

The expedition relied on the cooperation of several humanitarian groups : Danish Refugee Council, The American Friends Service Committee,Triangle Generation Humanitaire and Enfants du Monde. These groups organized the shows, transportation and logistics. The clowns just showed up with their props and were whisked away in a variety of new 4 wheel drive vehicles to the performances. The two days planned to work with the Danish Red Cross and one show with Danish Refugee Council were cancelled due to demonstrations and school closures.

And there are always sides, in Kosovo/a usually Serb or Albanian. We meet scanning nationalistic eyes on both sides. And also those looking beyond. We cooperate with different ends of the humanitarian spectrum. From the more go get them Medecins Sans Frontiere attitude evident chez Triangle and Enfants du Monde, and in a more established demeanor by the Danish Refugee Council. And we got just a taste of how ‘constipated’ the system can get when we attempted to work with the Danish Red Cross. But as Steve from AFCS was saying, “only one day when you couldn’t work, that’s a pretty good success rate”. Unhappily that turned into 2 and a half days. The country’s situation remains full of problems and separations that show little sign of potential resolve.

It would seem that the only people attempting reconciliation are those working with the United Nations or with the Humanitarian agencies. Our motto during our stay became: less military, more clowns. It is strange how one becomes used to seeing to the military presence. There are still plenty of places full of post-traumatic stress disorder and shell shock that could really use a visit by the clowns. And no doubt that we will return to Kosovo/a. Several of the last mornings were fog-filled cold grey winter mornings that matched suggestions that winter in Kosovo/a is very depressing and that that would be the best time for us to return. And hopefully we shall.