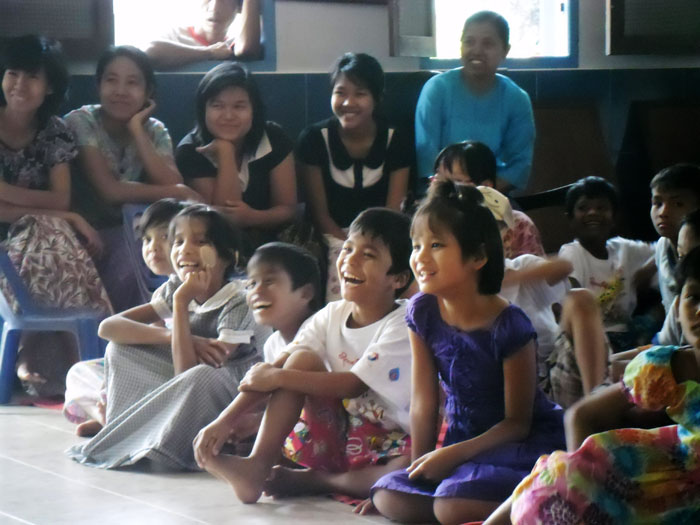 CWB USA partnered  with CWB France and Sweden in a three year long initiative in Burma (2010-2013.) The project  focused on bringing the fun and funny into the Children’s Training Schools in Yangon area as well as collaborating with Burmese artists. Clowns Without Borders  worked with Thukhuma Khayathe, a unique local theater group, to create an ongoing program of comic theater workshops in the training schools, and to offer healthy, balanced, joyful learning activities to the children through creative expression and movement from the worlds of clown, mime, circus and theater.

The goal of this project is to re-activate the workshops with the children, training local theater artists to conduct the workshops in the training schools. The initial project is centered in Yangon. There is a desire to expand the project both in outreach capacities and in duration, however given the uncertainty of the future situation in Myanmar, the choice is to start small and expand if possible.

Children’s Training Schools in Myanmar are state run institutions that house children whom have been arrested by the state and placed in detention. These children are orphans, street kids, children ‘in conflict’ with the law ranging in age from 7 to 18. These children, for the most part, do not have freedom of movement, access to normal schooling or artistic activities. They have been removed from society and completely marginalized. Until 2010, EMDH (Enfants Refugiés du Monde, Droits de l’Homme) a French NGO (now demised) operated a program to bring activity facilitators in contact with the children in the 14 training schools throughout Myanmar.

In 2009, Moshe Cohen, of CWB-USA, stayed in Myanmar after the Nargis cyclone project, to perform in the children training schools in the Yangon area. He also offered workshops to the local EMDH activity facilitators, and together they taught workshops in the schools emphasizing fun and personal expression through theater, clown, mime and circus techniques. The activity facilitators continued to use techniques from the workshops after Moshe’s departure. Moshe returned to Myanmar in 2010 to offer more training to the facilitators as well as again performing in many training schools and similar facilities. He traveled to Mandalay to bring similar activities to that area.

In March, Moshe Cohen  traveled to Burma and spent two weeks there working with the local theater group Thukhuma Khayathe. During this time they worked in the training skills:

Together, TK and Moshe created a 50 minute show that they performed in 6 training schools

Conducted workshops offering workshops to the children in each of  4 training schools focusing on circus, mime and clowning skills. The workshop goals revolved around fun, focus and humor.

Ongoing workshops in the Training Schools

The Thukhuma Khayathe actors  continued offering the workshop activities in the training schools bringing workshops to each school once a month over the course of the year.

I (Moshe) have just completed 4 days of workshop and show creation with Thukhama Khayeethe, and tomorrow we take the show on the road into the Children’s Training schools-6 shows in the next 3 days.   These schools are really institutions for children at the margins of the Burmese society, street kids, orphans and kids in ‘conflict with the law’, that the government has placed in these schools.  The work has been great, and the actors are quickly developing their clowning capacities. The show is bringing humor into skills they already have developed in acrobatics, magic and juggling, as well as improvisations around character relationships and mime that I have been introducing–so looking forward to seeing the smiles on the children’s faces. Next week we will plunge into offering workshops in the training schools, and developing Thukhama Khayeethe’s teaching skills.  As one might expect, there is a great sense of teamwork and fun that pervades the time we are spending together, and no doubt we will be sharing that with the children.