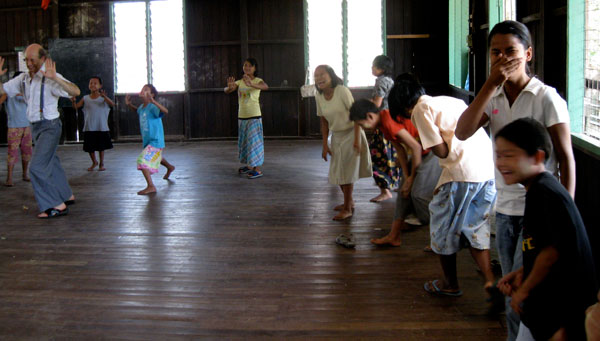 As part of the 3 year international Clowns Without Borders project (France, Sweden and USA,) Moshe returns to Burma to continue last year’s collaboration with Thukhama Khayeethe offering his full clown support. Clowns Without Borders have been active in Burma/Myanmar since 2004 when the French Clowns Sans Frontières began going there bringing performances. After the Nargis cyclone devastated the country, a broader effort to reach out developed with CUG Sweden, CMSF Belgium, and Moshe from the US participating. Following the French model of always involving local artists in projects, 4 shows were created, each involving with Burmese and Foreign artists, that then traveled down into the deeply affected Delta region.

This project comes close to the conclusion of a three year focus on Burma by CWB groups from Sweden France and the US. During this span of time, Burma has undergone significant political and societal openings growing out of the 2010 changes in the constitution, the release from house arrest of Aung San Suu Kyi and her subsequent win in the parliamentary elections of 2012. Although there are clearly marked changes in political and everyday life in Burma, a relaxing of strict laws and openings of freedom of expression, it remains unclear how far this will extend. The political power of the previous regime (military) remains quite strong.

Currently there is a huge burst of economic activity in an around Yangon, both in terms of foreign tourism and in terms of foreign interest in investing in the emerging Burmese economy. Still when one travels outside the capital, as our project did going to Bago for 4 days, life seems very much like it has during previous visits.

This project had four objectives:

The project proved successful in reaching all intended objectives. It is great to see the TK actor clowns continue to grow in their capacity to be funny, to perform with skill and confidence. The routines that we developed for the show were very funny, based on simple clowning and minimal technical skills.

It was a great pleasure to witness so much laughter during the shows, and to see the TK actors make the show their own. My presence in guiding the show into existence was crucial, as I played my role as master clown in terms of creating routines, and guiding the actors to discover the funny, and to develop the funny in the routines. But about halfway through the tour, the TK actors had a good grip on everything, and by the end they were deciding the show order and letting me know what to do. I am confident that they can continue to perform versions of this show anywhere, anytime.

The focus of our tour was mainly monastic schools in and around Yangon and Bago.

These schools serve families who can’t afford to send their children to school, children of migrant farm (rubber plantation) workers, and children from areas of conflict. We also performed at a boarding school for abandoned children, and an orphanage housing children affected by HIV/AIDS.

The workshops I offered to the peer group and medical staff of Memonastic2decins du Monde were powerful 3 hour sessions focused on opening communication in difficult situations and stress release. MdM works with HIV/AIDS prevention and treatment in Yangon and the very north of the country, mostly sex workers in Yangon, and drug users in the north. The staff handles a lot of difficult and serious situations. Providing the staff an opportunity to laugh was in itself extremely valuable. It was expressed that most staff trainings were of a technical nature and it was great to have a training that was so much fun. In the midst of the fun, there was some serious at we engaged in working through emotions of fear and anger, and working in conflictual situations. The workshops were very well received, full of focused activities and much laughter.

The project succeeded in creating waves of laughter in places where it is really needed!