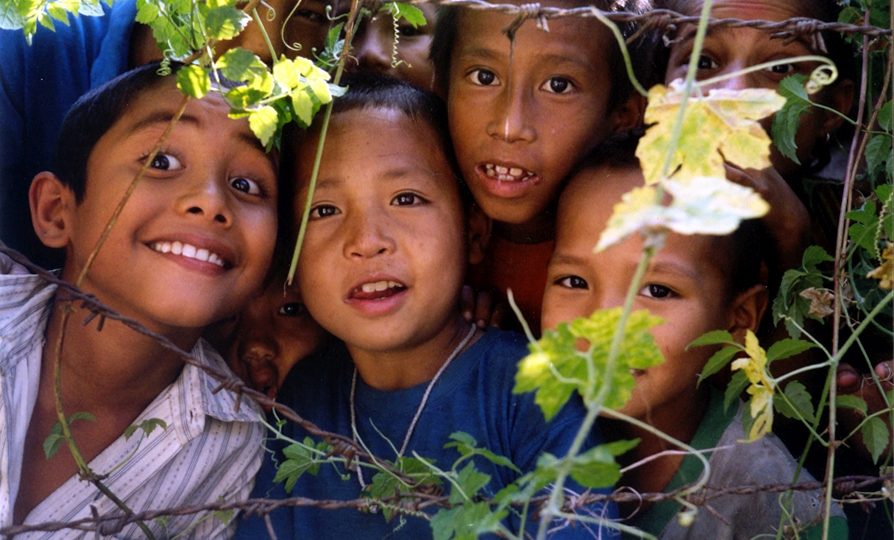 They are running towards us, spilling out onto the dirt road like monsoon flood waters.–
Eighteen thousand Bhutanese refugees surging forward in a sea of small brown hands. They are all reaching to touch the clowns who have traveled over great oceans and mountains, across a thousand rivers to this strange Fellini movie of a place Nepal.

We are clowns without borders and stilt walkers from down under. We are contortionists, acrobats and magicians from Sweden, Belgium, Finland and Australia. We are teachers, dancers and ambassadors of laughter. We are ten performers from around the world who have come together on a mission of global proportions: To bring laughter and hope to populations experiencing hardship and oppression.

Today we are at ‘Beldangi’ 2 Refugee Camp in the province of ‘Jhapa’. We are performing for a fraction of the 100 thousand plus refugees who were forcibly expelled from Bhutan in 1991-92.

For the past 12 years they have lived under the guidance of the United Nations High Commission on Refugees (UNHCR). Conditions are fairly liveable but residents are poor and extremely dependant on aid. Aid agencies have recently shifted their focus from relief work to income generating projects that will give the refugees some economic independence. The refugee crisis shows little promise of being resolved anytime soon despite ‘Bhutans’ recent agreement of accepting a small number of verified refugees.

As of 2003 there are an estimated 350 thousand displaced people in Nepal including Tibetans and many Nepalese who are internally displaced by the ‘People’s War’ with the Maoist Communist Party. Some 120 thousand Nepalese crossed into India during January 2003 alone. Some fleeing forced recruitment by the Maoists. The people of Nepal in whose name the war is being fought will continue to be its main casualty as they face renewed threats of violence, displacement, hunger and fear.

A woman in Damak, Nepal. 120,000 Bhutanese refugees have been living in camps near Damak since 1992.

And so we continue to do this work we do. This business of making people laugh, of giving them hope, of crossing borders to help heal the suffering of the world. And by doing so, make the world a better place.

From a telephone conversation with Nalle-(compiled by Moco)

From a phone call with Nalle in Sweden the report is in that the shows were a tremendous success. Performing for audiences between 6 and 18,000 refugees, the combined Swedish-American-Australian expedition traveled to all 7 Bhutanese refugee camps. In a gesture of solidarity, the expedition also performed in several of the local Nepalese schools for some 1500 kids. The audiences were thrilled and excited and the performers were mobbed by thousands of children after every performance. After the Swedish artists from the National circus school and Nalle Laneta (CWB-Sweden) returned to their country, the Americans (Rudi, Stephen and Emilia) and Australian stiltwalker Emma Leak conducted workshops with educators. Belgian magician Sylvain (from the Belgian Clowns and Magicians WB) arrived from Kathmandu. He performed in several of the refugee camp schools to smaller but still huge audiences (from 1000 to 3800). The American- Australian contingent left Damak in complete exhaustion. They are preparing to perform in some of the Tibetan refugee schools and settlements in Phokara and Kathmandu.

Nalle reported that although the refugees were very happy to have visitors, the expedition was overwhelmed by refugees wherever they went in the camps; that they had to give up several planned activities because it was impossible to go anywhere without a huge crowd gathering. The idea to give workshops was difficult because it was impossible to work with just thirty kids while another 500 were pressing in to see what was going on. with children in front being squeezed against wall, windows or wire fences. Sylvain in an e-mail describes being mobbed by the children after his biggest show, describing a scene where the UNHCR van (with the American-Australian contingent inside) showed up to rescue him, yet the force of the bodies of the children so strong that he could not get the door to the car open at first. This just points to the very difficult situation the Bhutanese refugees find themselves in after now more than ten years in the camps. A people without homes or work, without papers, or nationality recognized by their country. This situation is no better for many other refugees in other countries, but perhaps not as isolated or out of the public eye as the Bhutanese refugees are in the east of Nepal.