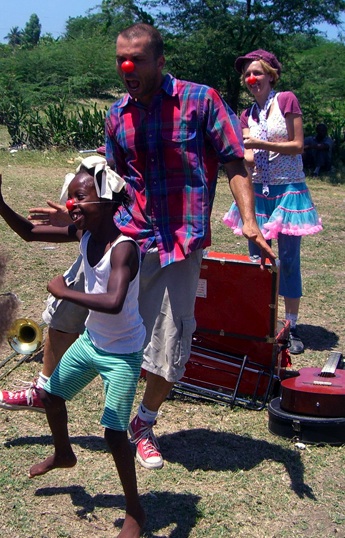 Following the aftermath of the earthquakes of January 12, 2010, Clowns Without Borders international was approached by many organizations working on relief efforts in Haiti. Payasos Sin Fronteras (CWB-Spain) and Clowns San Frontieres (CWB-Canada) immediately sent groups to Haiti in mid-February. In March CWB USA in collaboration with PSF, Plan International, Handicap International and SOS Villages, sent two teams of artists to the work with children and adults whose lives have been devastated by the earthquakes.

This is one of 5 trips to Haiti in 2010.  CWB-USA President Tim Cunningham explains more in his letter regarding our efforts in response to the devastating earthquake, which you can read here.

This project was in partnership with PLAN International

The group volunteered in Jacmel and Croix des Bouquets.