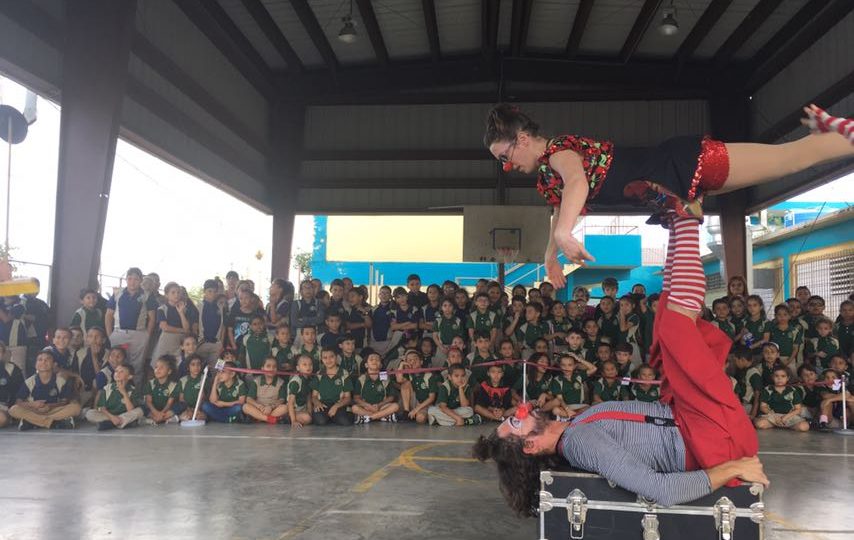 “The beaches look bleak, it’s very windy, and the palm trees are toppled over and look gray. Few people have returned to their houses, and telephone poles made of concrete and rebar are snapped in half, still lying on the ground five months after the storm. Power lines, too, hang around in piles.”

Puerto Rico, an unincorporated U.S. territory, is home to approximately 3.5 million people. In September 2017, Hurricane Maria, the deadliest storm of the 2017 season and a Category 5 hurricane, made landfall in the Caribbean. The storm was catastrophic for Puerto Rico, obliterating infrastructure, causing island-wide power failure and water shortages, and resulting in a death toll of over 3,000 people.

Puerto Rico’s Department of Education invited CWB – USA to perform throughout the island’s schools. Tour partners included Circo Nacional Puerto Rico and Mercy Corps. The clowns performed a total of 30 shows, often waking up before dawn to drive across the island. In total, CWB – USA performed for 6,636 people.

The history of European colonization and U.S. paternalism in Puerto Rico resulted in a debt crisis and thus a neglected built environment, vulnerable to disaster. For example, after Hurricane Maria, a large dam was considered at risk for rupture. Meanwhile, ships with relief supplies sat in the harbor, unable to distribute food or water. Roads were wiped out and vehicles were inoperable, hindering the distribution of aid.

Congressional disagreement over issues such as the Jones Act and Medicaid as part of disaster funding, potentially exacerbated and prolonged Puerto Rico’s recovery. At the end of December, 2017, one third of the island was still without power. Thousands of Puerto Ricans left for the U.S. mainland, perhaps permanently. FEMA, the Federal Emergency Management Agency, found itself stretched thin and unable to respond to infrastructure needs, even as basic survival needs weren’t met for all residents.

This tour received a lot of local and national press, including the New York Daily News, which wrote, “Clowns are doing what FEMA didn’t in Puerto Rico – giving people a reason to smile again.”

Karla Mi Lugo made a series of videos highlighting the tour: