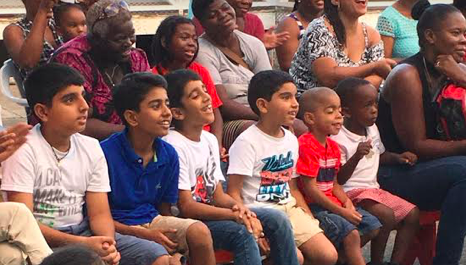 “At first, people had little understanding of clowns. Now they see what we can do. They see how clowns lift spirits.”

-Albina Matuzko, Founder, Behind the Beyond Community Theater Foundation

For the final tour of 2017, CWB – USA visited the island of St. Maarten, in the Caribbean. This collaborative project involved CWB – USA, Palhaços Sem Fronteiras Brasil, CWB – UK, and St. Maarten’s Behind the Beyond Community Theatre Foundation. St. Maarten is the smallest island in the world that’s divided between two nations: The Netherlands and France.

From November 25 to December 8th, this international CWB team toured a show for St. Maarten school children, performing in community centers, and offering laughter and levity throughout the island.

CWB – USA sent Alex Feldman, who performed with CWB in Haiti in 2016. Alex made a short video about the project, which you can view here.

On September 6, 2017, Hurricane Irma made landfall on St. Maarten. The Category 5 storm was one of the most powerful hurricanes on record, and the New York Times described St. Maarten as one of the hardest hit Caribbean islands. With an economy that primarily relies on the tourist industry, residents of St. Maarten face the difficult task of rebuilding, coupled with high unemployment in the wake of the hurricane.

“I hope that our presence will help Albina, who has started a community theater program. Our presence shows that professional performers have credibility. After each show, we talk to the kids. They have questions about our skills, our makeup—everything!”

Behind the Beyond Foundation was formed as a non-profit shortly before Hurricane Irma. The organizers offer theater classes and productions for locals. Behind the Beyond Community Theater works with locals on both the Dutch and French sides of the island to create unique programming based on community needs.