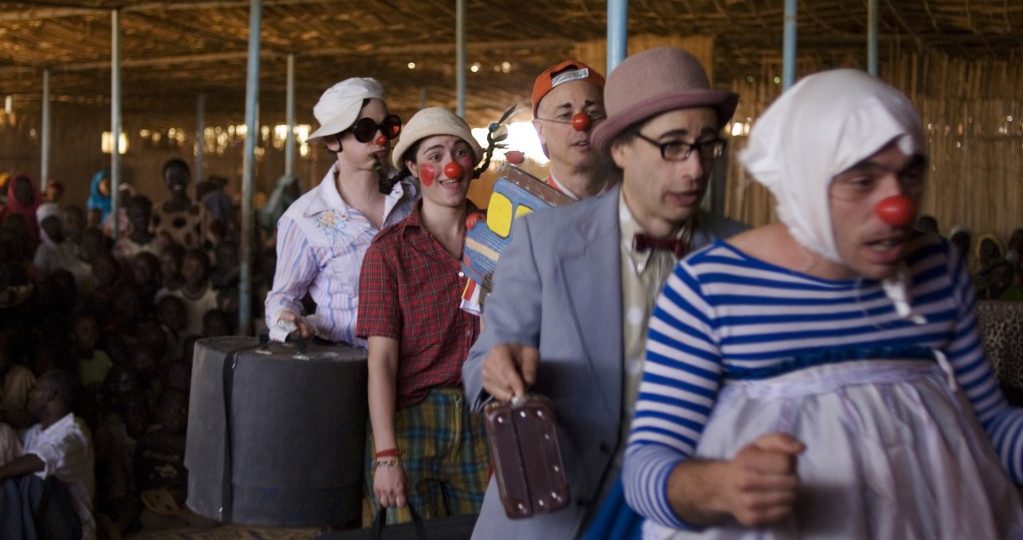 Five artists assisted by one photographer and one logistician composed the Clowns Without Borders team for the expedition. An interesting team with artists who present different skills, backgrounds and experiences. The show reflected this diversity and all the different audiences they encountered found laugher, dreams and magic.

Following our first assessment in December 2005, a second expedition was set up in march 2006, in cooperation with I/LNGOs and the French Embassy based in Khartoum. After 21 years of conflict, a peace agreement and cease fire in the south, and in Darfour has allowed some hope of stabilization. A lot of people were displaced, or fled abroad as refugees, and are still living in camps managed by the UN or various NGOs.

From the 17th to the 28th of March 2006, a team of 5 American, German and French artists performed 10 times for 4500 children in Khartoum IDPs camps, and in Ed Duweim and Soufi (south of Khartoum).

Workshops and games took place with the children in Aza/EMDH, Plan and War child centers.

We are also grateful to AFAA which financed transportation.

During one week in December, we met potential partners and faced Sudanese administration.

If you are a NGO and you want to be active in Sudan, you need to be registered with the Humanitarian Aid Committee. This institution delivers visa and travel permits. You have to submit your visa application form with motivations to the HAC. After a unidentified period, the HAC will notify you if they will allow you to come in or not, with or without any justification.

Different NGOs were interested by our activities and wanted to work closer. We identified:

Before coming, we prepared in collaboration with all of these organizations the planning and asking of authorisations. We faced one difficulty before departure: visas for American citizens, which we finally resolved through the Sudanese embassy in Brussels.