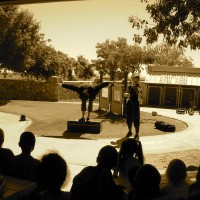 17 shows in 12 days, 2,000 miles on the car.… and we only covered half of Texas. Deep in the heat of things we found numerous, unlisted address and confidential homes for battered families, AIDS patients whose incomes can only cover the rising costs of their treatment “cocktails,” and children adjusting to life on a military base.

As with all expeditions we saw the potential to perform more, as the need for laughter is universal and needed within and without our borders.
Our first gig in Dallas launched us into the hot sun with a group of adult protection services caseworkers for their regional picnic. With no children to join us on stage, we searched for the right adult willing to play. Esther picked one of the grumpiest folks in the crowd, one who seemed to be the last that would find interest in a clown show. After some prodding and nametag stealing, our new friend started to laugh and steal the show from right beneath us. It was his, and he was ecstatic! A clown is born.

We followed this show with 3 days in Austin for some of our tightest and most confidential gigs. The homes we visited we comparable to jails regarding the security measures on the perimeters; however, once inside we met inspiring communities of children and mothers eager to laugh and very welcoming to us as their guests. No pictures allowed, so the only records of the tremendous laughter rest in our memories.

We were also blessed with the company of the improvisational master of Accordion, Mr. Oliver Steck. He set a musical backdrop to our show that brought a completely new life to the comedic timing and arc of the piece. Oliver played with us at all 5 of the Austin gigs and we almost succeeded in dragging him with us to El Paso. Our work in Austin was supplemented by heartgigs.org, an NGO focused on bringing live performances to emergency shelters, soup kitchens, hospices, and other such organizations.

A weekend of rest back in Dallas and then a Memorial Day performance at Promise House, a rescue/emergency home downtown. There we played for families and encountered one of the wisest children in all of Dallas. She came on stage with us and after getting her share of laughs, decided that she needed to give us a gift. She dropped to her knees and sifted through the grass searching for the most beautiful blade. She found one tiny, green seed.

That was her gift. This child was so present and in tune with her surroundings, she left us awe stricken.

10 hours on the road, a straight shot across west Texas, and we arrived in El Paso to watch a sunset which painted the dry, brown Mexico/Texas border with brilliant oranges, pinks, and an occasional dash of purple across the silhouettes of jagged mountains. We took a jaunt to White Sands in New Mexico to see the blinding dunes of gypsum and to slide and roll down them until we were covered in dust. We are still pulling the white crystals from our ears.

From the expansive western skies to locked 20 x 20 cells, we found ourselves performing 5 shows at the Juvenile Detention Center in El Paso. The teenagers who looked like 20-somethings, tattoos, scars, and eyes that have seen some extreme trauma, were our best crowd on the tour. We bolted from cell to cell trying to make sure we could perform for each group making brief friends along the way as doors unlocked and locked all around. Everything was sterile, controlled, and bland. We were shocked at how quickly and warmly we were made a part of the cellblock communities. Again, we wish we could have had more time to play.

We played at another couple of family emergency homes incognito from the rest of El Paso. After each performance in El Paso, save those in the Detention Center, we met some talented jugglers, and violinists. Better yet, we even ran into a few of these kids one evening at an El Paso Diablos baseball game. Also at the game we saw hundreds of soldiers, whose kids we were soon to visit.

We wrapped up our tour working with about 80 kids at the Logan/Fort Bliss Child Care Unit. This organization is run by generous mothers and teachers who provide free meals to all who can come, who give top notch educational and health services to children living at the base, and who provide counseling for those kids having trouble with the transitional lifestyle so many military families face.

We performed numerous shows for small crowds, mostly mothers and their children; we got to hold newly orphaned infants born with drug addictions. We saw the beauty of the Texas skies and the trauma of many reeling or recovering from domestic violence and of the war. The smiles and laughs were universal and plentiful.

Many thanks to our generous hosts and to those who let us juggle, fall, trip, cry, and play for them!