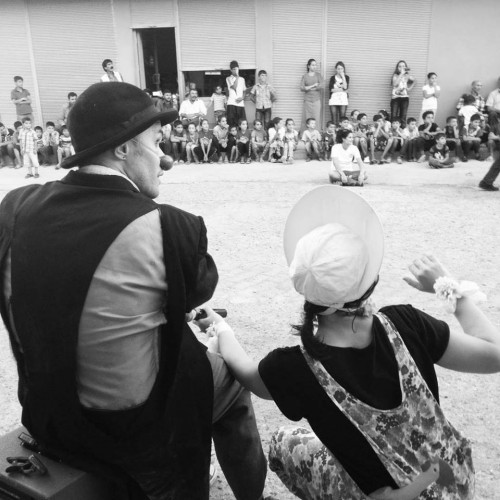 We are delighted to announce our first in person program of 2022. In March, Clowns Without Borders will be traveling to Iraqi Kurdistan. We will be meeting with partners, leading workshops, and offering performances, with the goal of setting up a multi-year program.

Tara Azizi is a human rights lawyer, and is the program lead for CWB’s upcoming work in Iraqi Kurdistan.

Tara introduced CWB to the project partners after spending a month working in Iraqi Kurdistan, including the camps. After returning to the United States, she said,

For the first time in my professional career, I felt pretty helpless working with legal procedure. The children were constantly worried that a new bomb attack would hit, making it hard for the kids to focus on something else. It was hard to find a child who laughed.

Tara is Tara Azizi is a Human Rights Lawyer with a demonstrated history of working in international development cooperation. As a result, she has established relationships with legal experts, intergovernmental entities, UN agencies, and other partners. Tara is of Kurdish origin from Iranian Kurdistan.

During this program, our audience will be Kurdish refugees from Iran. Due to their lack of legal status, the women and children do not have the option to leave the camps and apply for a beneficial legal status in Iraq. Unfortunately, they still have not been considered for the UNHCR’s refugee resettlement process or provided a long-term solution by the UN at the camps. The Iranian Kurdish camps were established in Iraqi Kurdistan in 1993 and most of the families have been in the camps for generations. The camps have suffered from conflicts and war and about two years ago, they experienced a traumatic missile attack, where most of them lost loved ones.

We will also be performing for Yazidi communities. The Yazidi are an ethnic minority, indigenous to Kurdistan. In 2014, they were among the civilian communities targeted by the Islamic State in the Sinjar region of Iraq. The UN Independent International Commission of Inquiry (COI) documented crimes against the Yazidi including targeted executions, abduction, and human trafficking. In 2021, the Higher Regional Court in Frankfurt Germany ruled these crimes against humanity, and passed a conviction of genocide (Amnesty International).

Each CWB program is designed with our partner’s specific requests in mind. In March, our focus will be building relationships with our partners, and learning how CWB can make the most meaningful impact in the camps. Since the communities we will be working with are experiencing protracted displacement (i.e they have been displaced for over 5 years,) we have the opportunity to foster long-term programming. We will be traveling with supplies for workshops and performances, as part of our inquiry : what’s wanted? How can CWB best serve our new partners and audience in Iraqi Kurdistan?

Language matters. We’ve written a whole serious to ask (and answer) some common questions, such as: What does “refugee” mean? and What is protracted displacement? We also wrote a post about Internal Displacement. Soon we will be writing about autonomous regions versus countries versus territories.