In 2017, CWB – USA and CWB – Brazil toured to South Sudan, where we performed for over 20,000 people. During our visit, CWB – Brazil clown Arthur Toyoshima experienced a tense encounter with local authorities. Because CWB only goes where we’re invited, we always operate with a local contact person, someone who is intimately familiar with the social and cultural nuances of a place, and who helps legitimize us in the eyes of people who might otherwise be suspicious or uncertain.

This story I’m going to share is from a risky situation when I was in South Sudan, in 2017. It was a learning experience for me, and I hope it will be for others as well.

My trip was long, from Sao Paulo, Brazil to Juba, the capital of South Sudan. I had three connecting flights: Dubai, Nairobi and Juba. My flight from Dubai to Nairobi was late, so I missed the last flight to Juba that day. I finally arrived, seven hours later than planned. Unfortunately, that meant I had missed the meeting about security procedures in the capital, telling us not to film or photography soldiers, police or military sites. Basically, it’s forbidden to film and photograph in Juba, at all.

During our last few days in South Sudan, after performing in the refugee camps of Bentiu and Malakal, we returned to the capital to perform our final shows. We were on our way to the refugee camp on the outskirts of the city and I was copilot in the car, doing some filming of the pedestrians and the houses we passed. Suddenly someone shouted, “Arthur, police!” I quickly lowered the camera, but it was too late, the cops stopped the car. 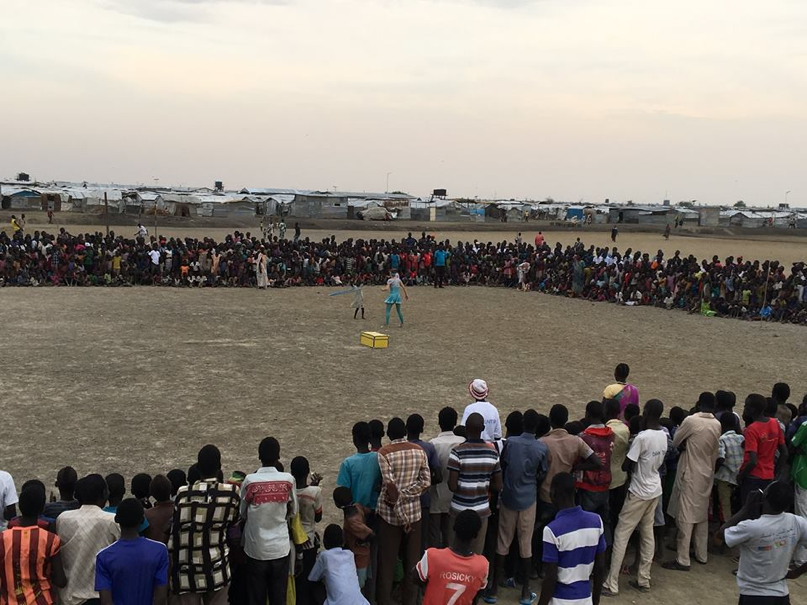 There were a lot of them, and they had many weapons. They stood on the driver’s side of the car, shouting at him in Dinka, the local language. The driver tried to explain where we were going and what we were doing, but it didn’t help. To make matters worse, our local programmer, Aaron, had gone ahead in the other car. They didn’t stop, so we were left without our representative, who knew how to talk to the police.

I looked at my companions, apologized, and got out of the car to try to resolve the situation. Picture me, 5′ 3” tall, dressed as a clown, with a red nose hanging around my neck, standing next to the tallest people on Earth, holding machine guns and screaming. They wanted to know why I was filming them. I tried to explain, as calmly as possible, that I was a clown and didn’t know that I couldn’t film the street. They looked at my phone and saw there weren’t any police pictures on it.

They began to argue among themselves in the Dinka language. I noticed that they wore different uniforms, some from the army and others from the police. They had different opinions on how they should solve our problem. Then, in the middle of the discussion, a man presenting himself as a member of national security joined the discussion. Now we had three distinct organizations arguing about what happened. I waited for someone to look down at me and say something, but no one did. I don’t think anyone wanted to know what was going on with the clown.

After 15 long minutes, our local programmer Aaron arrived. What a relief. He knew how to talk to the police and military, and everything calmed down. However, they decided to take us to a headquarters because they needed a greater authority figure to resolve their disagreement over what to do with us.

We arrived at the headquarters, and the lieutenant looked at me and then looked at a soldier. To me, his expression said, “What did you bring me this time?” I sat down and talked for a while, taking care not to mention that we would be performing at the refugee camp on the outskirts of the city, which houses a population considered to be “against” the local police and military forces. After 30 minutes, they had yet to reach a decision. I was still nervous but tried not to look it. I decided to do a meditation. I closed my eyes and breathed. After a while I heard a laugh, and opened my eyes. Somebody said, “Do you need a bed?” I nodded my head. Laughter. The energy dispersed and we were directed to a different room with a calmer environment. They told us that they have not been able to reach a consensus and we have to wait for the general. Thirty minutes later the general arrived and looked at me in the same way as the lieutenant. He made a similar comment: “What is this? A Japanese clown?”

General: “Where are you from?”

General: “Can you take pictures in any location in Brazil?”

General: “But on the street?”

General: “But in any place?”

General: “Let this not happen anymore!”

We were released after deleting the videos of the city of Juba, and said goodby in a much calmer atmosphere. I was still shaken by the experience, but I forgot about it when I saw the eyes of the first children we performed for. We did a beautiful show for over 1,000 people.

At the end of the day, as usual, we shared our experiences and emotional states with the group. It’s our check-in moment. The whole group gets to talk, and they’re supported with love and affection. It was a relief to everyone after such a tense moment. Being able to express and speak feelings is comforting, just like laughing! 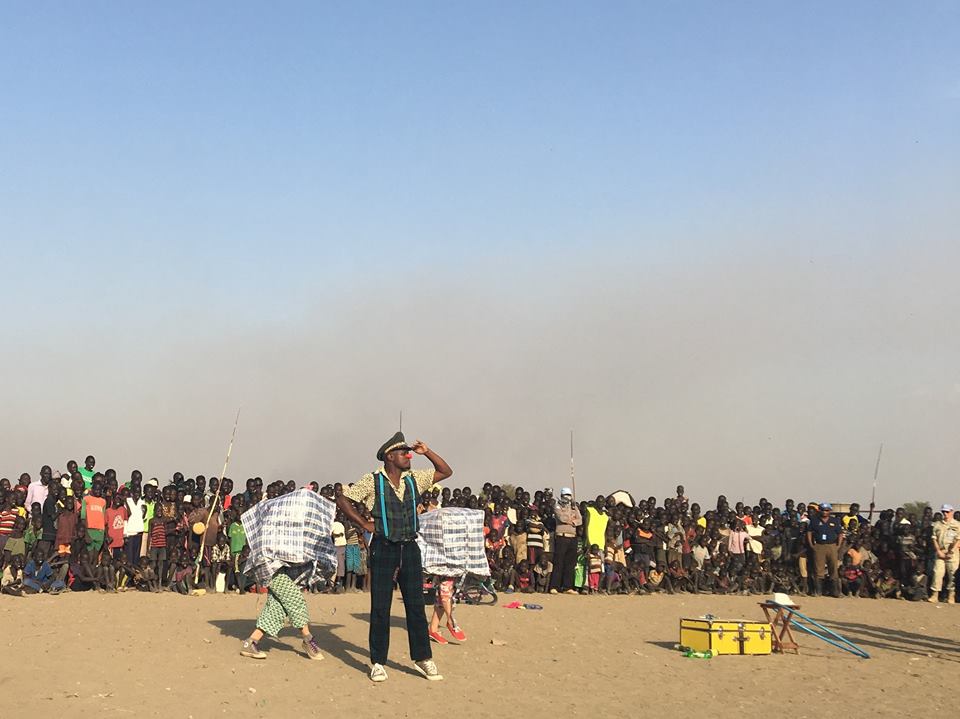 This story, which I’ve told in a tragi-comic way, is just one of the unpredictable things that can happen in the field. We work in places where the pressure is high, and a small spark can lead to a big problem. For me, there’s always a need to be calm no matter what happens. It’s important to react according to the situation, and always trust and rely on the team so that we can solve problems together. If you don’t know, ask! If you need help, ask! If you need a hug, hug! For me, this work is about sharing and experiencing life with our colleagues and the public. Laughter is what leaves everything more organic and smooth.

The CWB – USA tour to South Sudan was a collaboration between the US, South Africa and Sweden. We have brought together artists from six different countries, plus a programmer from South Africa. It was an incredible exchange and learning experience. During a 19-day tour, we presented to more than 20,000 people and gave workshops to over 1,000 people.

2 thoughts on “Safety In the Field”