We came, we played, we shared work and built community. The Clowns Without Borders International General Assembly for 2016 has come to a close, but not before accomplishing some serious comic business. Clowns, board members, and leadership from across the planet joined for three days of meetings and workshops to take care of several important goals for the year. CWB-USA representatives Sarah Liane Foster and Molly Rose Levine attended the gathering held near Dublin, Ireland.

The General Assembly (GA) fills a room with comedians and artists who support a serious mission: Bring laughter where it’s needed most for healing and psychosocial relief. Discussions and debates, sometimes intense, all lead to critical operational decisions for the chapters that make up the federation of Clowns Without Borders International (CWBI).

The essential agreements are substantially enhanced by the value of working with multiple cultures, in one location, for one purpose. Sharing decisions with other cultures is the ultimate collaboration exercise. Each member needs to activate their cultural intelligence to build and sustain relationships, fostering trust that creates confidence in decision-making.

The collaborative essence championed at the GA extends during CWB projects. Artist volunteers embody it.

This year the GA approved the Emergency Response Protocol. Now, in an emerging disaster, CWBI has a method for how we can work together to react swiftly and efficiently. We will share logistical resources between all of the chapters. A working group is charged to oversee this protocol when the next disaster strikes. We have never tried to work this closely as an international federation, and it’s exciting to see us coming together, exemplifying the spirit of collaboration as an internal value that transcends borders.

In another fantastically inspiring outcome of the meeting, CWBI inducted Brazil as the 13th chapter of the Federation! It was with laughter, applause, joy (and some happy tears) that we welcome the first CWB chapter in Latin America. Brazilian artists Aline Moreno and Arthur Toyoshima are the foundations of this chapter. The United States team are thrilled to continue to work closely with them as they grow and build an organization. 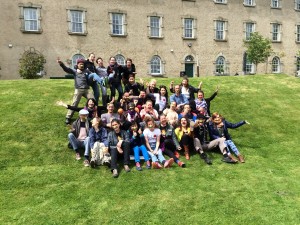 2016 was the 5th meeting of its kind. A representative from CWB France said that this year feels like the true beginning of CWBI. The Federation has reached a new level of function. The chapters are at various levels of maturity and come together in collaboration (not competition) where cultures are working together as one.
Everyone smiles in the same language. Clowns Without Borders operates in the same “language.” If you believe in the power of smiles and collaboration, please support our mission.