Tuesday, March 20th marked six months since Hurricane Maria made landfall in the U.S. territory of Puerto Rico—with disastrous results. The official emergency period has been long declared over, but access to electricity, stable housing and a return to normal life still feels far off.

Even now, almost six months after the hurricanes, destruction is everywhere. It’s not comparable to Ghaza or Aleppo, but it’s a reminder of the other, less obvious fallout that remains. Ragged billboards line the highway. All of the street signs and highway signs are sideways, upside down, or have been torn off completely. The streetlights worked about 20 percent of the time that we were there. Many small businesses have closed, and the island may be facing a historic population loss, as people emigrate to the States.

The average annual income for a Puerto Rican family is around $18,00 and the poverty rate on the island is 46 percent. The cost of delivering fuel and water is impossible to maintain, and families in the most rural areas have been told that it may take up to one year to regain services—if ever. I didn’t know any of this.

The island was already dealing with a debt crisis and shaky infrastructure before the hurricane hit. Now, many Puerto Ricans, especially those living in rural areas, are still without power. Streets still flood because of clogged sewers, and many people have struggled to secure reimbursement from FEMA. There has been a 246 percent increase in calls to the Puerto Rican Department of Health’s suicide crisis hotline, since the same time last year, demonstrating an escalating mental health crisis. And thousands of people have emigrated to the U.S. mainland, perhaps permanently. 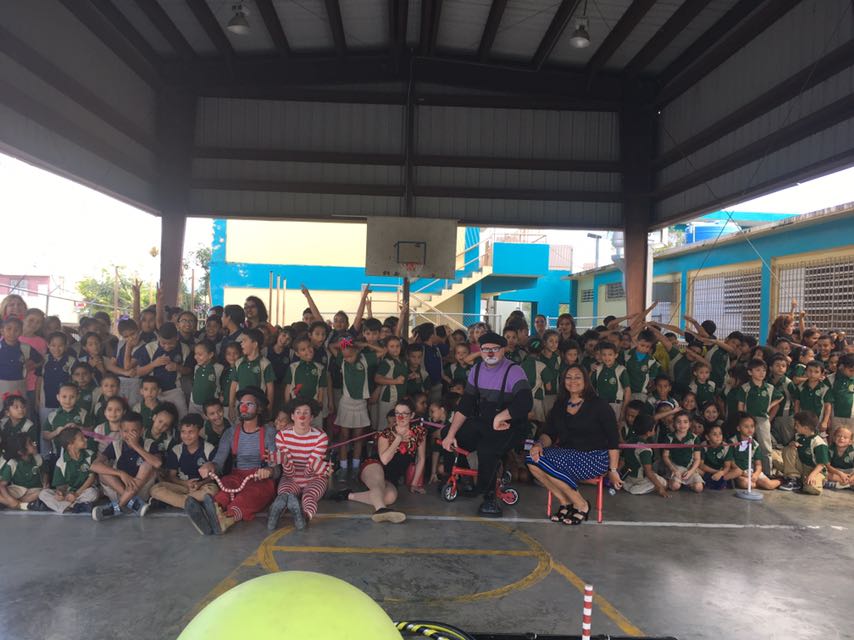 Molly Z, one of the other clowns on tour, wrote:

The beaches look bleak, it’s very windy, and the palm trees are toppled over and look gray. Few people have returned to their houses, and telephone poles made of concrete and rebar are snapped in half, still lying on the ground five months after the storm. Power lines, too, hang around in piles. We were there on the 12th and 13th of February. Some towns and villages in the nearby mountains have been told never to expect power to return.

Our fellow U.S. citizens in Puerto Rico lack the resources they need in order to rebuild, due to political holdups, debt crises and political maneuvering that has little or nothing to do with their daily lives.