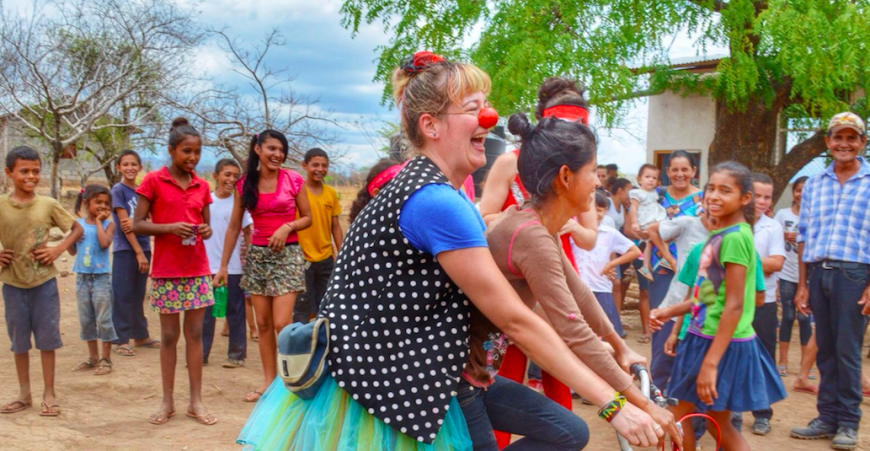 Welcome to an ongoing blog series of contributions by CWB – USA’s wonderful board members!

Erin Leigh Crites, Vice President of Clowns Without Borders USA, is an international theatre artist, educator, and purveyor of make believe. In the past ten years, Erin has traveled extensively to explore the global community and create bonds through theatrical play. She splits her time between Los Angeles and Idyllwild as an ensemble member of Fiasco! Physical Theatre and a full-time instructor in the theatre department at the international boarding school, Idyllwild Arts Academy. She joined Clowns Without Borders in 2010 after receiving her MFA in physically-based ensemble theatre from Dell’Arte International.

When I was a child, people frequently told me I was too sensitive. Too shy. Too worried. I had a hard time relating to other kids. I was always asking questions that nobody cared about, taking an interest in global things, rather than local. I even developed insomnia by age 11, because I was worried about world conflict: Israel and Palestine; Northern Ireland; India and Pakistan. These issues of the 90s kept me up at night. And I cried. A lot. I cried because I felt helpless. I was too small. The problems and people were far away, but I felt them so intimately. I felt like my heart was constantly squeezed by a world unable to listen to its own need.

I couldn’t articulate that at 11 years old. I was just a kid with no power, surrounded by kids who thought I was weird for caring. I felt like that a lot. Weird for caring. I still do. Watching people interact, I would think, “Aren’t there bigger things to worry about?” Or, “I don’t think you’re even listening to each other.” I didn’t know what all of that meant, or how it would manifest in my sense of purpose, until after I pursued physical theater at Dell’Arte International.

I had never taken a dance class or moved my body in expressive or dynamic ways, other than through sports, until I went to Dell’Arte at 23 years old. During my audition, I was told to “just sit and speak,” because I was trying so hard, and failing, to be physical. When I just sat and delivered my autobiographical piece, I connected. It was because I was talking about the need to connect with others. I was on fire about the power of theatrical expression to unite people through imaginative play, through the creation of an interpersonal feedback loop. And I realized that if there can only be one lesson, it’s listening. I need that loop to look deeper into myself. I need to connect. And listening allows me to connect to others and to myself. 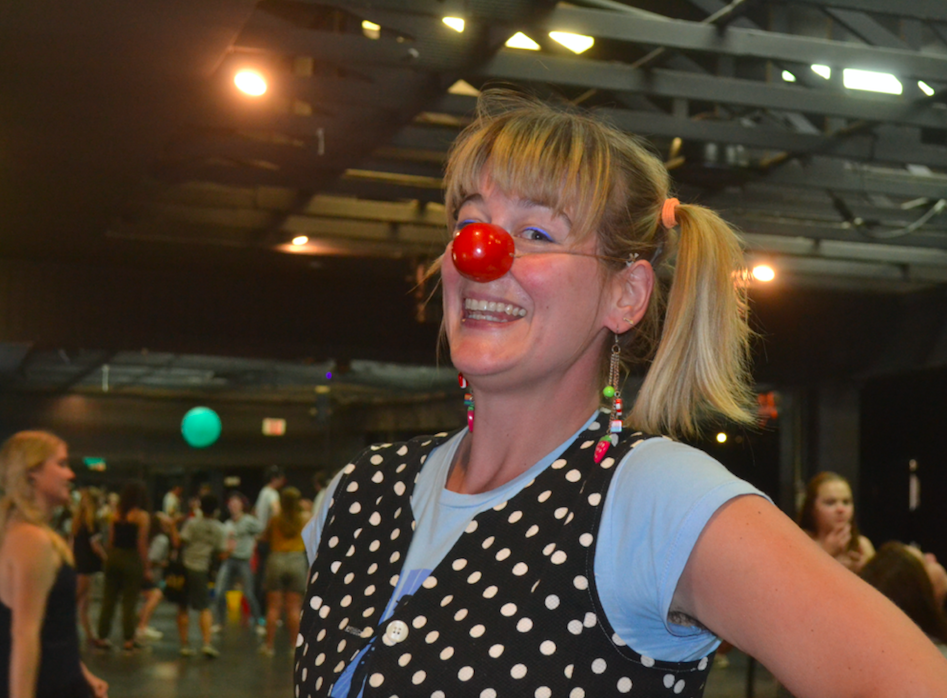 Flash forward through three years of rigorous physical theatre training, including clowning, and I met Adrian. Adrian Mejia was a graduate of Dell’Arte and a performer for CWB. We had one of those beautifully wandering late night conversations that ended with him telling me, “You know, listening to everything you’ve said, I really think you should go on a Clowns Without Borders tour.” I didn’t know anything about the organization, but I lit up inside as he continued to describe the work.

I’d like to take a moment to honor Adrian’s memory. He was a bright light in this world and the catalyst for my work with CWB. When I heard of his passing, a fire was stoked in my innermost being.

I emailed Clowns Without Borders again. I had already submitted my application, but now there was urgency. During a phone call with Dianna Hahn (who I believe was program director at the time) I was asked if I had any preferences about where I’d like to travel. “Nope,” I said, “just the next available position. I just need to go.” The conversation ended with her telling me that all of the trips in the near future had been filled, but that she would keep me on CWB’s radar. This felt like an important step, and it was.

In November, Diana called and said, “Someone dropped out of the next trip to Haiti and it leaves in two weeks.”

My first CWB trip to Haiti, in 2010, changed everything. I found a deep resonance, an echo of my childhood self. That lonely, only child, who wanted to connect with the world, stepped into the lives of the people she had worried about in the middle of the night. I was no longer helpless. I no longer felt too small or that the problems were too far away. In fact, the problems themselves dissolved in favor of connection with the very people who remained resilient against them. Connecting to an individual magically lifted the crushing weight of trying to “solve” the global problems squeezing my childhood heart. That’s how connection through laughter operates.

The word levity comes from the Latin levitas which translates to “lightness.” If I can connect with one person at a time, through laughter, we all get lighter. And it doesn’t matter how short the interaction is or how small my contribution seems, compared to the grand scheme of the universe. When the nose is on, I am on, and my soul/sole purpose is to connect.