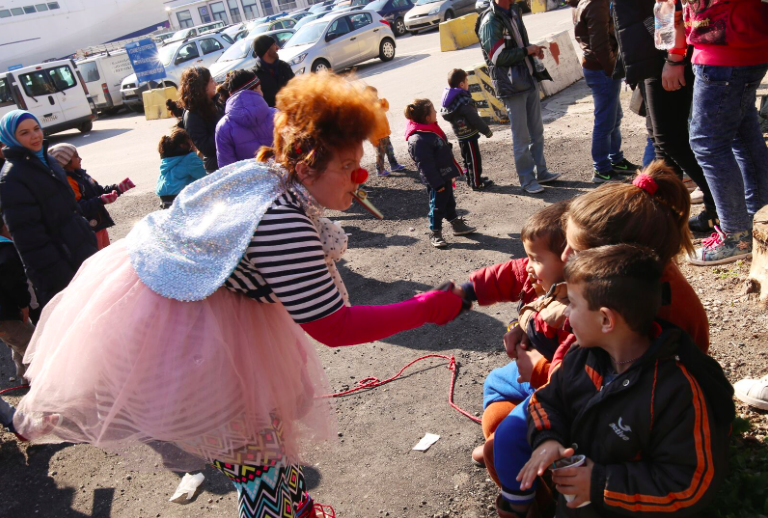 How Many More Children Will Die, As They Try to Live?

“I lost my daughter, his sister, in the ocean last night.”

Lesvos 2015. Those were the words of a Syrian mother, answering my question about whether her son wanted to come and see the CWB performance a few meters away. For a few moments, I felt as lost as them. We were there to meet the children who came ashore, sharing play and laughter after their journey. But what does one say to someone who just lost their daughter in the fight to survive?

It has only been one month since CWB Sweden finished its most recent visit to Lesvos. Our tour was two weeks of playful encounters with children and young people who, despite being forced to live in Moria, the infamous camp called “hell on earth,” showed so much humility, warmth and joy. Two weeks and almost one thousand meetings. We promised to come back this spring. Now I no longer know what is happening.

In recent days, my social media stream has completely exploded with reports of events on the border between Greece and Turkey; political outposts eroding asylum law and the Convention on the Rights of the Child; and attacks on volunteers offering food and shelter to migrants. I see videos showing tear gas clouds and tiny children who cannot breathe. Videos with armed soldiers threatening people on the run. Videos with inflatable rafts that are punctured with sharp sticks and pushed back into the sea. Boats full of people like you and me. Boats with children. Then I read about how a four-year-old Syrian boy drowned off the coast of Greece yesterday. Forty-six people were rescued, but a four-year-old boy died.

My daughter is three-and-a-half. In another world, another time, it could have been her. How many more children will die in the hope of living?

There are still certain principles that need to be adhered to, even in a world that feels really hard to understand. There are still international agreements and laws. The UN Convention on the Rights of the Child is clear:

Article 6: Children have the right to life, survival and development. Article 22: Children on the run are entitled to protection.

The Convention on the Rights of the Child was made into Swedish law in January of this year. The purpose was to strengthen children’s rights and the children’s perspective in all situations where the child is affected. Where is that perspective when the right to protection is once again eroded? When institutions of power advocate violence against people who have the right to seek asylum?