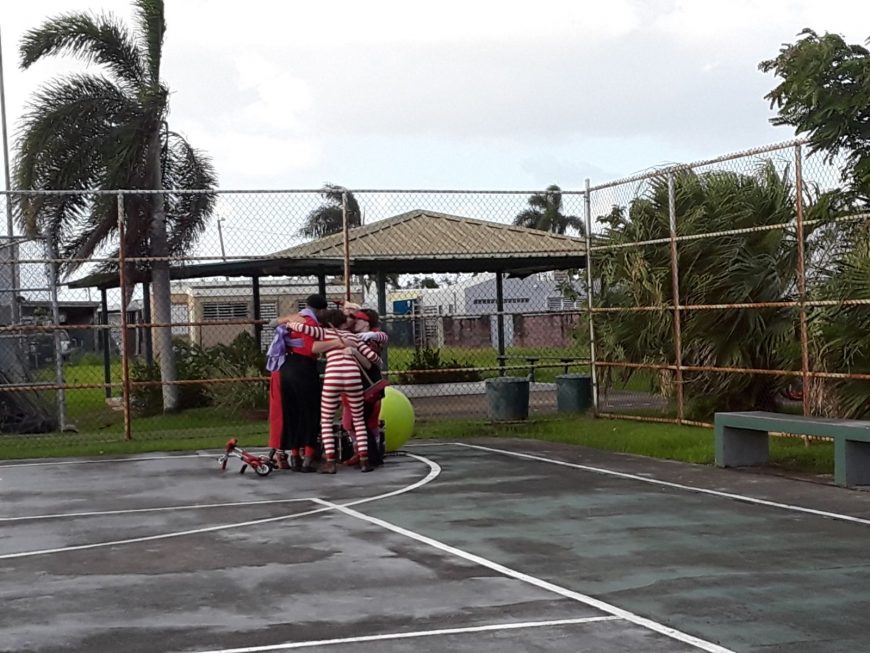 “We clowns are well positioned to respond to the unexpected with imagination, creativity, joy, and a sense of expansive possibility.”

– Marisol Rosa-Shapiro, Board of Directors

Clowns Without Borders USA is delighted to welcome Meredith Gordon and Marisol Rosa-Shapiro to the Board of Directors. Both are eager to step on during this unique time, taking leadership as CWB adapts to the current pandemic situation. We hope you’ll join us on September 9th, at 12pm Eastern for a Facebook Live event introducing Marisol and Meredith.

Meredith Gordon (aka Squeeze The Clown) is a performer, administrator, and writer, with 20 years of experience as a hospital clown. He led the Atlanta Clown Care team for Big Apple Circus and is a founding member of Humorology Atlanta. Meredith is also one of the co-founders of D.R.I.V.E. Forward (diversity, representation, inclusion, voice, equity), an organization founded to raise awareness around issues of diversity in clown and arts communities.

Meredith, who performed on a recent CWB tour to The Bahamas, says, “I am honored to join the CWB board. Clowning offers a unique opportunity to bring a sense of levity and joy where it is needed. While serving on the board, I hope to continue this tradition and bring the CWB spirit to more people.”

Martha Neighbors, Board Treasurer, first met Meredith while working for Big Apple Circus’ Clown Care Unit. She nominated him to the board because of his empathy as a hospital clown, his decades of professional experience, and his impressive leadership history. After speaking with Meredith for the first time, board member Sayda Trujillo says, “I was left with a lot of inspiration for the way love of clown manifests in different people. Meredith is a clown who listens deeply and is a generous collaborator.”

Marisol Rosa-Shapiro is a performer, teacher, leader, organizer, facilitator, mover, and shaker. She has a sensitive and nuanced view of international aid and CWB’s role within the broader context of humanitarianism. She says, “I am excited to join the CWB – USA board at this critical time. As a relatively small organization with a global perspective, CWB can be uniquely agile in addressing the needs of this difficult, strange moment.”

Marisol first learned about Clowns Without Borders when she studied at Helikos School with Sarah Liane Foster. She has since performed with CWB on three tours, all connected to the U.S./Mexico Border. In 2018, following her tour in Tijuana, Marisol helped CWB draft its first anti-oppression statement and adopt new protocols for training and supporting cross-cultural teams. Sarah Liane Foster says, “She brings a deep understanding of the work of a clown in intercultural settings, an infectious enthusiasm, a commitment to anti-racism and anti-oppression, and so much more!”

In addition to her service with CWB, Marisol is currently working to roll out the second season of Adventure Theater Live!, an interactive, Zoom-based show for kids ages five to nine, set in The Great Great Forest. Season Two will launch in early October. You can learn more about it at www.adventuretheaterlive.com.