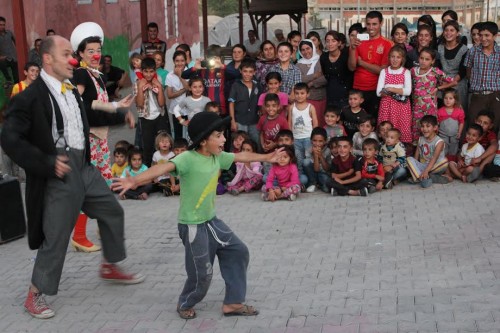 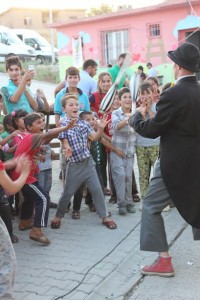 For our seventh of eight shows together, we packed into two large vans and rode two hours out of Diyarbakir, to a refugee camp just outside of a city called Batman.

(At the risk of sounding like a naïve, ignorant American, I asked some of the other clowns about the name Batman, and here is what I found out: yes, people in the area know about the superhero named Batman. No, the city’s name has nothing to do with the superhero’s name. The city name Batman is a very old name than has no particular meaning known by anyone I asked. We did see a child in the Batman camp wearing a superhero Batman t-shirt, suggesting that the camp’s residents appreciate the coincidence.)
We had been warned by those in our group who had already performed at some nearby refugee camps that audience could be quite rowdy. They said we should be prepared for the kids to throw stones, not necessarily out of hostility, but because they had grown up around a lot of violence. Our local contact told us to bring as little as possible into the camp, and not to wear or carry anything we didn’t absolutely need to have with us, because the kids would try to take things from us. “They’ll eat you,” he warned. 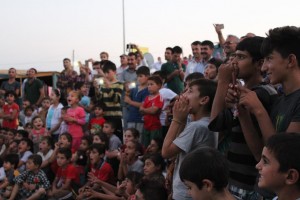 Initially, as we got out of the vans, the kids at this camp behaved like the kids we’d met in many of the villages we’d visited – they watched us curiously but shyly, from a distance. The difference here was that they approached more quickly. After a few minutes of show set-up, we were being followed by a small audience of children. They were not at all violent, although as they got used to us they were quite assertively playful. Perhaps because we arrived in costume, and our presence was clearly playful, the kids approached us to play. Every little thing turned into a game, and we played for a good long time before the show ever started. We made faces, did funny walks, made animal sounds, chased each other … 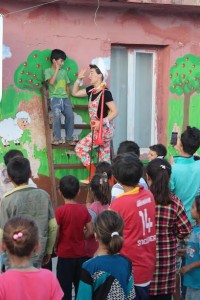 This playful, festive atmosphere continued during our parade through the camp before the show. The kids paraded along with us. Others joined in. Adults smiled and watched the parade snake up and down the neat rows of grey tents lined up on the sloped flagstones.

Before the show, a man who worked at the camp explained to the crowd that we needed everyone to stay behind the cords that marked the edge of the stage. The kids proceeded to be one of the most enthusiastic and orderly audiences we had all week.

After the show, they hung around to play some more: to chase and be chased, sing with us, re-play little parts of the show, show us their baby siblings, play hand clapping games …

On the way out of the camp, our two vans of clowns had very different moods. The van I was in was still riding the wave of energy and joy we’d been sharing with the kids for over two hours. It had felt so good to be playing where play was clearly so wanted and needed. But the other van, I heard later, was somber, feeling another side of that experience. This was a Yazidi camp, housing refugees from Kobane, Syria and Sinjar, Iraq. The Yazidi people, because they practice a religion that is different from Islam, are particularly targeted by the Islamic State. The people who survived and escaped have experienced and witnessed horrible things. To be able to play and laugh with those kids is incredibly joyful; knowing what brought them here and how uncertain their futures are is intensely saddening and enraging. 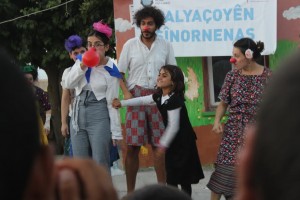 It’s easier to be a foreigner visiting Batman Camp. I have the luxury of feeling this sadness and anger a little bit at a time from far away. It is harder for the Kurdish clowns in the group, who are these refugees’ neighbors and share a language and elements of culture with them. They told us that as we were leaving, the children were asking when we’d all come back. There is already talk of the Kurdish clowns returning to Batman Camp, a possibility of some Turkish clowns visiting the region again too … Clowns Without Borders often travels far from home to bring laughter to areas where it’s needed, and the idea behind this collaboration in Turkey was that there would be a troupe of local clowns empowered and trained to continue this work in their own country. I hope they do. We’ll be cheering for them and supporting them however we can. 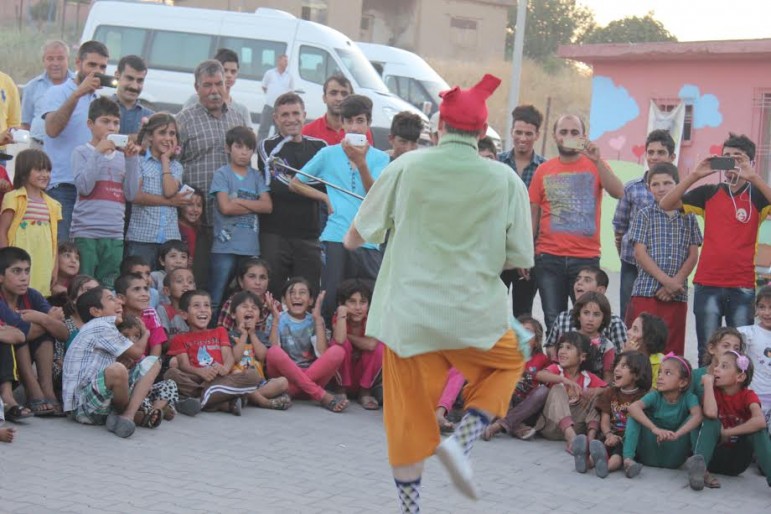