Tacloban is one of the largest cities in the Philippines that was directly affected by typhoon Yolanda (Hayaian). The destruction here is very intense. Debris, rubble and devastated buildings line the streets in every direction. There are a lot of displaced families who have lost everything, yet it’s obvious that their Christmas spirit is still alive and well. Myself and the rest of the Clowns Without Borders team set out to do two performances in displacement camps. The camps were lined with rows of relief tents as far as we could see. Our driver was having problems finding our show locations due to the destruction that littered the streets and the down pour of rain that has been flooding parts of Tacloban for the last 24hrs. When we arrived at the first encampment we were greeted by 200+ children. 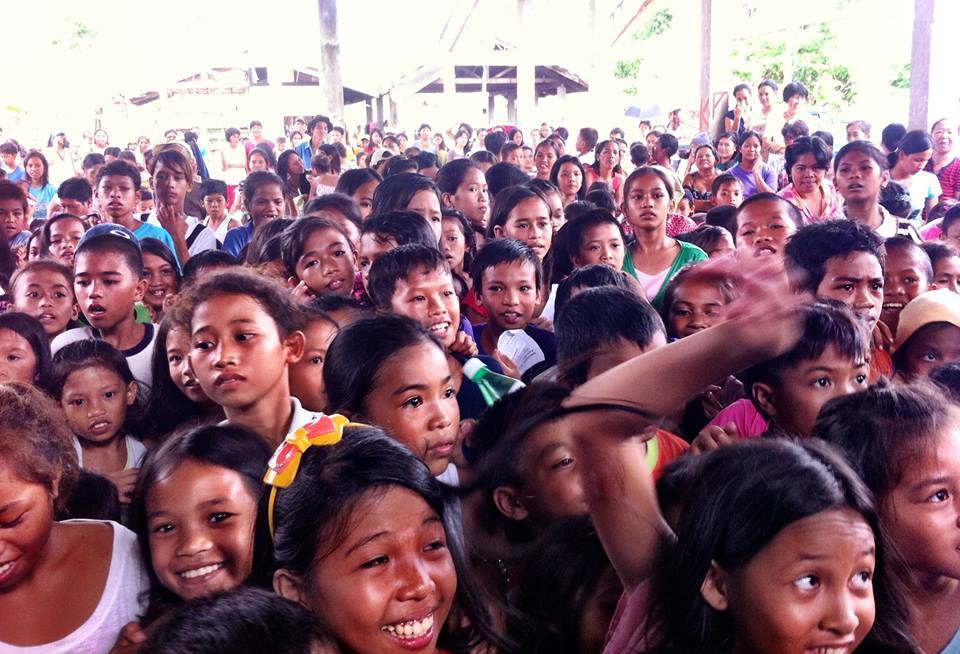 For the duration of the show I forgot about the situation outside the tent. The amount of joy and laughter was enormous from people of all ages. It seemed that everyone’s spirits were very high and full of life. Everyone thanked us and cheered with joy. As we drove away to our next performance it was very clear that the hard times of the city are long from over. Looking through the van window on our way to the next show the harsh reality of the relief tents, flooding, and the worn faces of the survivors were everywhere.

The rain had not let up and continued to dump from the dark skies above. We made our way to our second performance space which was a makeshift structure made of bamboo, lashed together with fishing line and topped with a huge tarp. It was barely tall enough for me to fit under and it had ankle deep standing water covering most of the dirt floor. The tent quickly filled in around us with 200 or so eager children leaving the team even less room to work our magic. After the show, all of the children followed us out to the van, excited and happy: it was quite a sight to see the triumph of joy even with such grave conditions.

Our show helped bring happiness but the fact is Taclobans strong will to survive and Christmas spirit was the vital ingredient of this glorious day which has left us clowns with warm hearts and fully inspired to share more love. Merry Christmas everyone! With love~ Team CWB