Volunteer Sarah Liane Foster recently returned from Clown Encuentro, a 9-day festival in Bogotà, where she taught a 5-day intensive. Check out her lovely account of her time there and learn more about our partnerships in Colombia!

Last week, I had the great fortune to travel to Bogotà, Colombia as a representative of Clowns Without Borders-USA, to teach a 5-day clown intensive as part of the ClownEncuentro, a 9-day clown festival of workshops, panel discussions, and shows.

This is the fifth year of a 5-year collaboration between CWB-USA and a number of highly-motivated clowns in Colombia who are interested in doing the kind of work CWB does. There are many people in Colombia who have been displaced by internal conflict, and now live in areas where poverty and violence are quite common. Pasos di Payasos, based in Bogotà, and CaliClown, in Cali, have been working in partnership with CWB to bring levity, laughter, and empowerment to these areas in the form of clown shows and workshops for children and adults. Part of CWB’s collaboration with these clowns has involved sending a representative each year to the ClownEncuentro, to offer workshops to further the clown training of local performers. 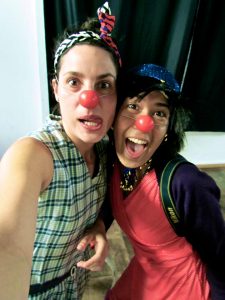 This was the fourth year of the ClownEncuentro, and it was a full-on, inspiring event. There were people there from all over Colombia and South America, and artists brought in from Argentina, Brazil, Italy, Mexico, Spain, Switzerland … Each day, there were workshops and panel discussions on from early until late. The shows generally attracted quite large audiences. It seems like the incredibly hard work of the clown community that organizes this festival is paying off. Clown is starting to happen in Colombia. My workshop was full to overflowing with clowns from all over Colombia and Peru. It was an incredibly playful, energetic group. There is very little clown training available in this part of South America, and the people who come are ready to learn as much as they possibly can in the 9 days! Some were hospital clowns who wanted to further their training, and start learning how to create performance material for stage or street settings. Some were beginners, who wanted to develop characters and build confidence to go on stage. One was a 7-year-old, whose mother asked if she could bring him along so she would be able to take the workshop. We tried it for a day to see how it went. As it turned out, his presence helped many of the adults access their silly playful selves, so he stayed for the week. 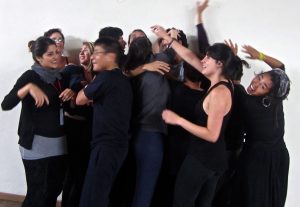 On the first day of the workshop, I asked them all what brought them here. Why ClownEncuentro, and why this workshop in particular? One answer that came up a lot was that they were excited by the opportunity to learn clown from a woman. Most of them had only studied clown with male teachers, and wanted to experience a female perspective on the style. I was honored to be their female clown teacher for the week.   Another answer that came up multiple times was that they were interested in doing CWB-type work. They wanted to help people through clowning.   Yet another answer that a few people gave was that they had encountered and experienced a lot of sadness in their lives, and they wanted to find a way to express that in a comic way. Throughout the work we did on character, listening, play, and generating material for shows, we worked on the honest presence that the clown must have – because often truth is the funniest thing, and because otherwise the whole thing can come off as cutesy and fake. And I found that simple exercises in being present and showing reactions to the audience provoked tears in my students. I checked in to see if they were okay. They were. One man said, ‘Thank you. I haven’t cried in years.’ They seemed to want that release. And they then proceeded to be quite present, and quite funny.

These clowns were ready and hungry for play. In every activity, from games, to simple walking exercises, to improvisations, they would dive in and find all kinds of comic and poetic material. It felt like all I needed to give them was a small window into play and they would happily bust it open to make a huge door into vast territories of creative funny. When I told them to take a moment with their red noses on to explore a skill they brought in, in character, I looked around a minute later and there were little scenes erupting all over the room. There was a kind of opera happening between two clowns in one corner of the room, a wrestling match with a juggling club across the way, a ridiculous magic routine nearby … Amazingly generous as students and artists, they gave me a lot to work with. So we worked hard! 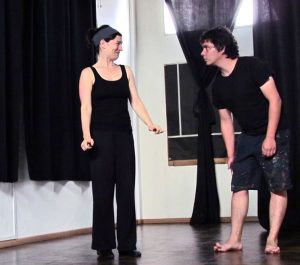 By the end of the workshop, the clowns had walks, mannerisms, costumes, beginnings of voices, and fledgling acts based on improvisations in character. There were tears again as we closed. I gave them their ClownEncuentro diplomas, and told them to go out and play well, and honestly, and a lot! Some of them are going back to work in hospitals. Some are working on clown shows. Some are looking for more physical theatre training. All bring a great deal of energy and joy to this work. I hope they continue, and that our paths will cross again.