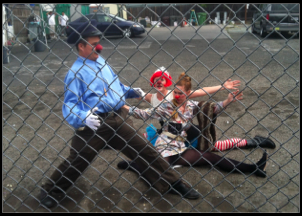 We finally got to get down in clown in East Oakland! It was a great first step. There is a long food line every Thursday outside of The Oakland Catholic Worker and we lit it up this week with laughter and bubbles. ​ 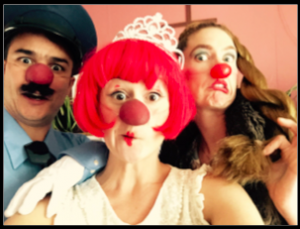 We have been meeting with leaders from East Oakland local churches and non-profits such as The Oakland Catholic Worker, and Oakland Community Organizations for over a year exploring ways to partner sustainably.

While all three of us have had the good fortune to take international trips with Clowns Without Borders (Matt to Swaziland and Kwa-zulu Natal in South Africa in 2006, Molly to Haiti in 2010 and Micael to the Philippines in 2014), we have very little collective experience providing humanitarian clowning to an area of crisis in our own backyard. 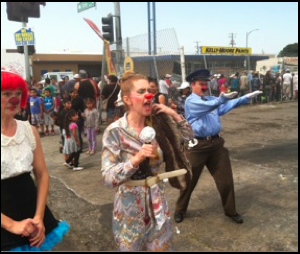 In fact, as an organization, we have focused the majority of our work internationally due to the “without borders” model, which tends to represent this idea of working outside of one’s borders. CWB Executive Director Tim Cunningham notes, “This is a model we should, can, and need to change.  I would love us to put so much more energy into local work.”

As the reach of CWB has expanded over the years, it has become necessary to those of us in the Bay Area to recognize the very real crisis of poverty, oppression, and violence playing out here at home.  We’re so excited to start a project locally that we can sustain and grow. 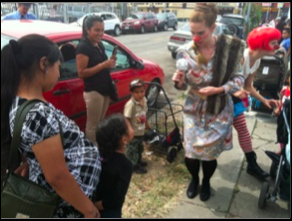 The Oakland Catholic Worker has a weekly food line where families in need line up around the block to receive assistance. The Oakland Catholic Worker’s Tom Webb contacted us over a year ago wanting to bring clowns to East Oakland and Tom has served as our central partner every step of the way. Tom explained that the dynamics in the food line can get tense, not only because everyone in the line is living in poverty, but the ethnic diversity in the line can lead to cultural and language divides, often exacerbating an already difficult situation.

As clowns, we were able to provide entertainment to the children and adults alike in the line. Tom noted, “You could feel the entire energy in the line shift when you guys showed up.” We certainly felt it as well. We felt very well received, very welcomed. 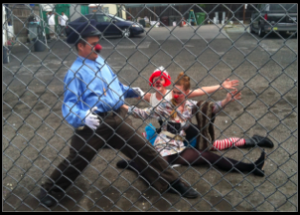 This is an exciting first step, and we’re eager to continue this work with The Oakland Catholic Worker. Donate to keep this project going here and if you’re a performer in the Bay Area that wants to volunteer your talents, please fill out our volunteer evaluation form here.