The Clowns Are on Fire!

After spending time at many schools and orphanages, we went to an arts center in Grand Goave. We were greeted warmly by Morlon Ley Bellerice, who runs the Young People’s Theater School, “Mouvement de la Jeunesse pour la Culture” or MJC. They set us up in front of the arts center for a show around 6 PM. 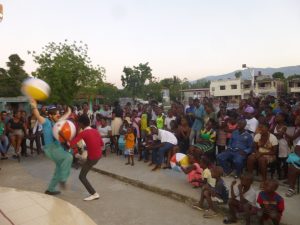 A few hours earlier, during a workshop with teens, I had worked out a routine with César Jean Oudly, who teaches circus and theater to children. We called the bit ‘monsters,’ but at showtime, we couldn’t find César. Morlon stalled a while as MC, but eventually he had to start the show. Chris and Clay brought some kids on stage who had just participated in their juggling workshop that morning. Next, Chris did his number, ’suitcase’, which involves a little girl in the crowd (read how this bit works here). We skipped the ‘monsters’ piece, and at this point, I was back stage, in Morlon’s tiny office, as the music played for another routine. I think Clay was performing when I smelled something funny. Smoke!

I looked up and noticed a flicker out of the corner of my eye. A flame burst out of the electrical panel. In a split second, the loud music abruptly stopped, the lights went out, and I heard a gasp from the audience. I bravely extinguished the flame with my bare hands. Well, not exactly true. I had only begun to think about it when the flame went out by itself. It was over in like two seconds. 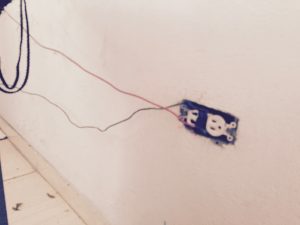 I wasn’t surprised at this burnt circuit. Before the show, I watched as a handyman removed an electrical outlet plate, and ran a skinny wire to the exposed outlet. I had even taken a picture of the outlet, as I was captivated by all the jerry-rigging I saw around me. I guess there was no extension chord in this small building. The skinny wire was twisted on to another skinny wire and then to a third, which ran a sound system and a spotlight. It was all powered by a gasoline fired generator. You only have electricity a few hours a day around here.

However, I was surprised when I saw the handyman return, check all the junctions of twisted skinny wire, scrape off some vinyl wire housing with his knife, and within 5 minutes, get everything working. I half expected it to quickly burn out again since we didn’t lighten the electrical load, but his quick fix was lasting.

At last, César arrived. I was glad to see him. Besides being a teacher, he could speak a little English, and could help translate my 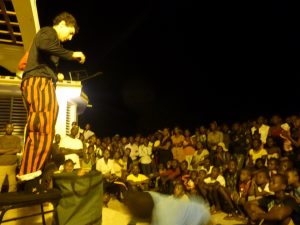 instructions, so we put ‘monsters’ back into the show. The teens were thrilled. They had all returned to this early evening show dressed to the nines (folks here may not always have electricity or running water, but find a way to dress smart). Some of their friends joined in too, even though they weren’t at the afternoon workshop/rehearsal. There were more teens wanting to participate than we could fit on the little ‘stage’, which was really just a small landing in front of the steps by the front door. So after the monsters bit, I improvised a plate spinning routine, on the spot. It utilized the rest of the teens who were hungry for some stage time. It’s not fair for me to single them out for dying to be on stage. We professional clowns still have our moments on this tour when it appears we can’t STOP performing, but that’s another story! 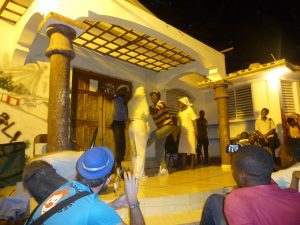 The crowd liked the teens. They liked our bits, too. But I have to admit that their favorite was a performance that was inserted at the last minute. Four adults re-created a funny Haitian folk story. Ernso Decius was playing a drunk husband in an elaborate skit full of sneaky deceptions. We didn’t understand his Kreyol, but we clowns know funny when we see it, and we watched in envy as Ernso was getting the biggest laughs of the night. He is a true multi-talent, too, because earlier that day, he made three oil paintings on canvas – one of each of us in our costumes. The oil paintings were presented to us after the show.

The audience kept growing. This was the only game in town. It’s possible that our arrival in Grand Guave was the excuse to put 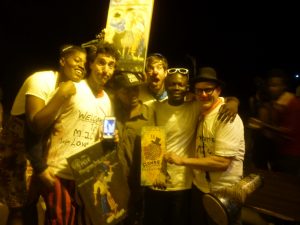 the show on that night, but I couldn’t help noticing that the locals were doing a great job at entertaining themselves. This was something I had been hoping for a long time, since before the trip even began. On other tours, I hope to provoke as much laughter as possible. This time, I didn’t bring my usual assortment of props, and Chris and I talked about moving in the direction of being catalysts of good cheer. It was less about the audience appreciating us visiting performers, and more about the community appreciating each other. And this was an ideal place to aid and encourage more theater since it’s a land without much television.