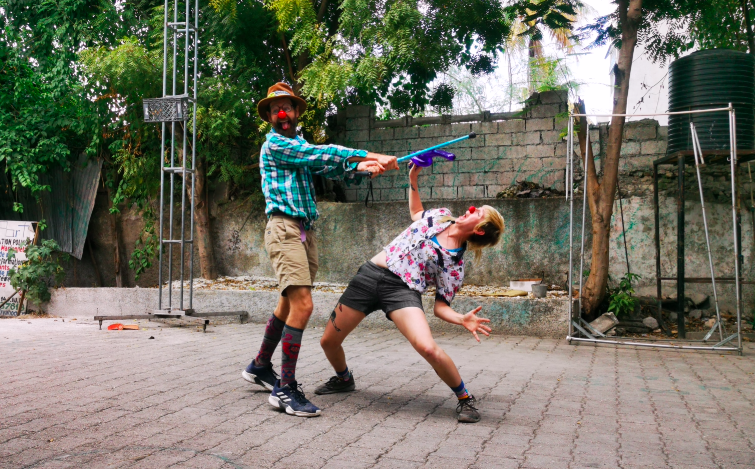 Sometimes CWB partners with established NGOs like Save the Children and Gift of The Givers. Other times, we work with local community organizers who fly under the radar, yet remain deeply committed to wherever it is they call home. CWB artist Tim extends his gratitude to his friend Ricardo St-vil, who works tirelessly for his Grann Sous community in Haiti.

Ricardo St-vil has been a good friend of mine throughout the eight years I’ve been coming to Haiti. He is a resident of and champion for Grann Sous (GS), located a 30-minutes walk from Matenwa. He has seen many friends and family leave Lagonav in search of more opportunity abroad. Port au Prince (PAP), while dangerous, has more educational opportunities; many folks seek work in agriculture and construction in Chile; and of course, there’s always the great siren of America, luring those lucky enough to secure a visa (which is increasingly difficult under current political conditions).

Ricardo has had stints in both PAP and Anse-à-Galets (the port city of Lagonav), but he’s committed to his GS community. In his mind, he has a choice: he can either leave like others have, or work to make his community a place where people want to stay.  He has chosen the latter, and works tirelessly in the pursuit of his vision for a more engaging GS. He ran a sports program for a while (he currently manages the GS women’s soccer team) and now runs a community library that offers programs for kids on weekends. He also, incidentally, speaks impeccible English and is largely self-taught.

When I told him my sister, who is a clown, was coming to Haiti and hoped to perform on Lagonav, I wasn’t surprised to hear he was eager to arrange shows for us in GS. Our first show was at the Catholic church, and hundreds of community members came and laughed with us. People appealed to us to do more shows, saying twice as many would come the next time. We were even invited to perform at the GS Flag Day celebration on May 18th, where schools from all over Lagonav compete in marching and dancing.

After some shows in PAP fell through, we decided to return to Lagonav where we figured we could quickly set up more shows on the fly. Our first call, naturally, was to Ricardo, who secured us three more school shows in GS, within two days. In addition to securing the shows, Ricardo also acted as tech crew (setting up sound systems for us) and hype man. Ricardo would call over the mic, urging people to come watch our show. His voice was integral to each show’s success. As he put it, “Haitians love loud music. If they can hear loud music, they will come to see what’s happening.”

After our final show, Ricardo’s mother and his wife prepared for us a wonderful feast of rice and beans, chicken, plantains, potatoes, and (in my opinion) the best pikliz in Haiti. Ricardo, mèsi anpil, we could not have done this without you.

If you are interested in learning more about Ricardo’s work in Grann Sous, email Tim at tdutcher [at] wesleyan [dot] edu and he can put you in touch with Ricardo.