Day two began with more games like He Haw Ho, Magic Clap, Ha Ha game and many more. After lunch we split the group into four to reflect on what we’d learned so far and pick some key exercises that had resonated with them –we simply wanted them to create a piece of theater based on things they had liked so far. The group I was facilitating came to the consensus they wanted to create something weird, and funny, and interesting for their audience. They had loved one song we had learned on earlier and wanted to create their own version, in a weird, funny, and interesting way.

We started to play with animals, birds, cats, dogs and ducks, and I asked them to explore the opposite sound and movement of the animals. The result was my first major experience with the depth of clown already present in Philipino culture. I was laughing so hard I was choking. These young adults had a level of skill with humor and physical theatre that I frankly was not expecting. Their song was really a riot –and, what’s more, it was featured among three groups presenting equally impressive performances that incorporated humor and physical movement. 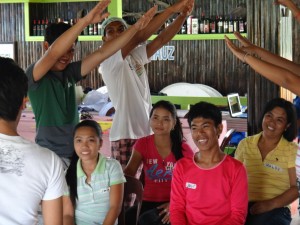 At the end of day two we gave them a homework assignment. Make something funny for us for tomorrow, we said. That evening, we headed to Balangkayan to perform again. The workshop participants even traveled there to see the show and watch us perform. This time, we’d actually gotten to practice and the show was a lot of fun. Many people who at first were playing on the sidelines or just chit chatting, by the end, were crowded in watching.

Later many of the participants in the workshop shared with us that seeing us perform changed something —when they saw the joy of the children and felt the sense of celebration in the space, many of them realized just what they were learning at this workshop –the power of play.