The CWB team is doing well, a bit tired and sore but we are holding it together as a team.  We had the pleasure of Plan International Asia organizing our 3 shows of the day into one giant show of 800+ in attendance. There were people of all ages in every direction. Behind us, a military guard with a fully automatic rifle, smiling children in front of us, a handful of people that had climbed up on to a big pile of rubble in the back, and children that were watching from up in the rafters so they could see us clowns work our magic. We could see smiles and hear the sounds of joy radiating through the hearts of the survivors echoing through the crowd. To make the stakes even higher, as we started our show, a sideways rain poured down creating a flood of children moving even closer in to avoid the storm. We were completely surrounded! Not knowing what to do with the limited space, the clowns regrouped and carried on with the task of creating laughter in the face of disaster. 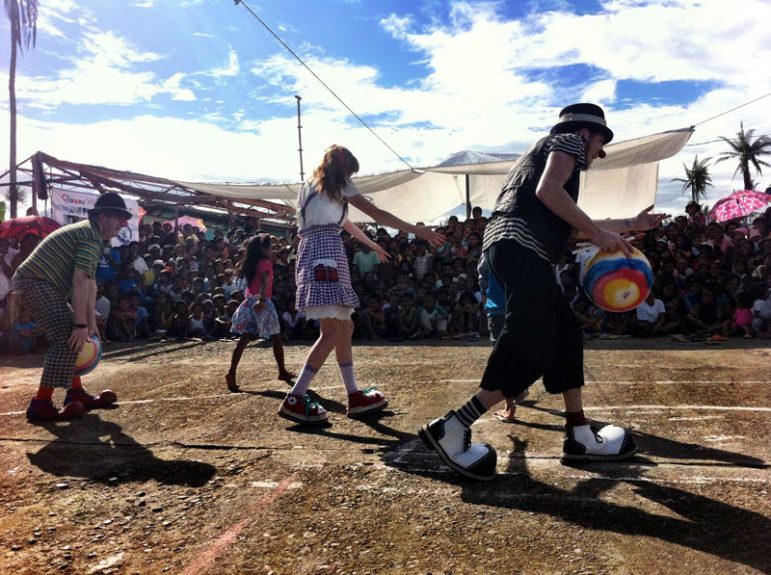 The show went really well yet again and it feels like it just keeps getting better and better. The children had a mob like feel after the show wanting high fives and photos with the whole crew. We formed up with the children and our Plan colleagues in front of the town of Balangakaya’s giant Christmas tree which was made of a bunch of plastic bottles and decorations. It was truly a wonderful site to see! The Filipino spirit is still alive and well, standing together as one! After our performance we all headed back to get some much needed relaxation and prepare for the long day that was to come in the morning. ~ The CWB team