Erwan shares some thoughts from the team’s last few performances in Eastern Turkey.

Erwan: After our first show in Istanbul, we flew east to Hatay, a small province between the Mediterranean Sea and Syria. There, the temperatures hovered around 104°F. But despite the heat, we had a great stay. Over the course of our two days, we performed six shows and one parade. The most amazing experiences for me were in the villages of Hacipasa and Davitpasa, towns less than 10 km from the Syrian border. The local children in both towns had never seen a clown or a theatrical show. There is something surreal about performing and visiting these small and peaceful communities so close to Syria, which in my mind means a frightening war. It was good to see the reality rather than just the mass-media version.

The population is a mix of both Turkish and Syrian refugees. It’s interesting to know that this region is traditionally made up of Arabic speakers, rather than Turkish, so the refugees had a much easier integration into Turkish society than they might with a language barrier. 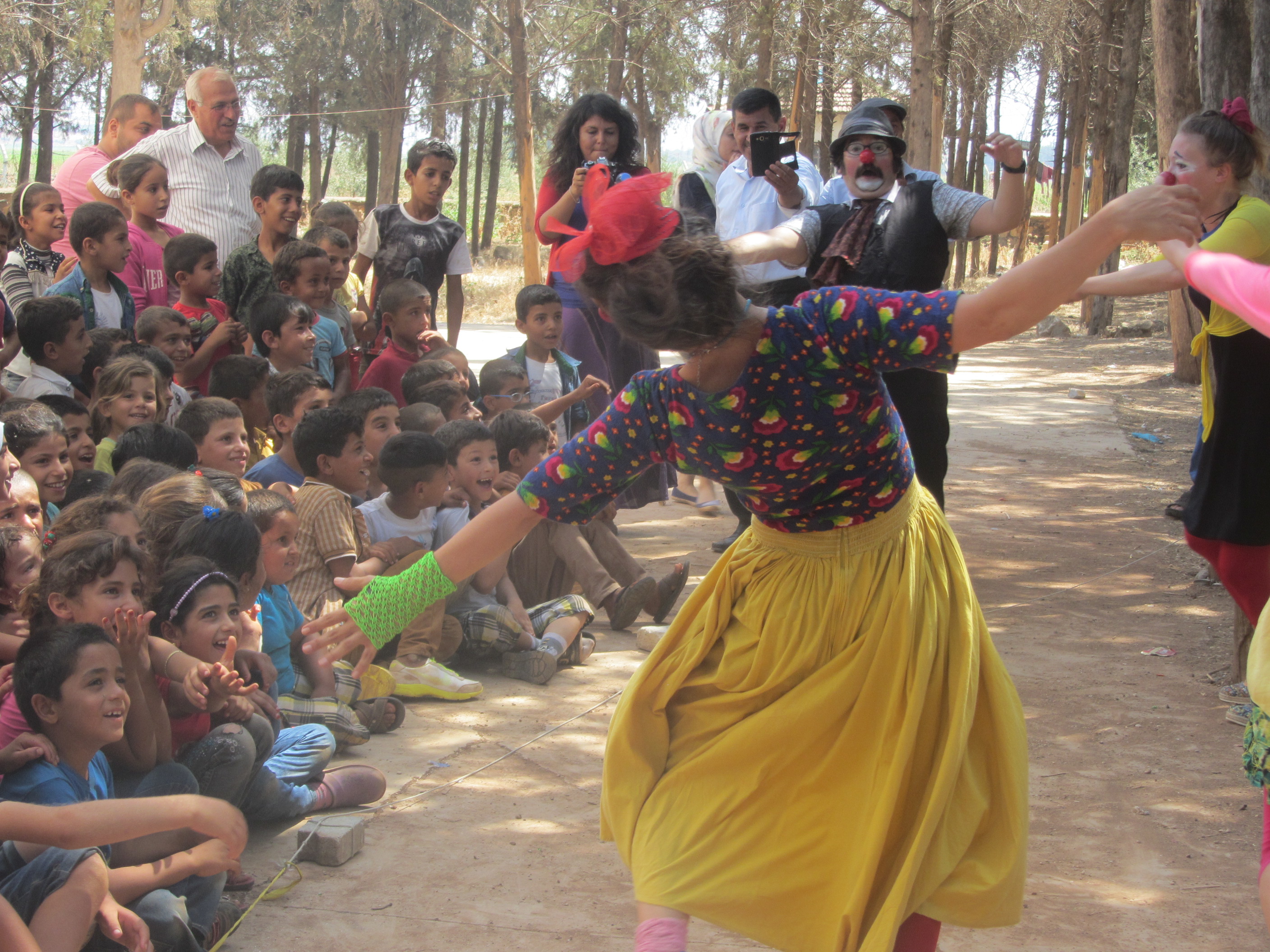 The second day, after we performed our last show in Kirikhan at the end of afternoon, we traveled by car to Urfa, arriving at night after a 5-hour trip. Urfa is very close to Kobané, a Kurdish town of sad infamy in northern Syria. From September 2014 to January 2015, the city was under siege, and most of the city was destroyed, while most of the population fled to Turkey (source).

In Urfa, the Kurdish influences were stronger than in Hatay. This southeastern region of Turkey really felt like a crossroads of Arabic, Kurdish, and Turkish people, all living together. There had also been Armenians here before the genocide. And the first inhabitants of this place, back in the BC days, were cave-dwellers. (source)

We were heartily welcomed by Hayata Desk, who works for Support for Life, to their community center, located close to the poorer parts of the town. We performed three shows there. Selene led one musical workshop, and we presented two shows in public parks as well, all with the help of Support for Life.

The two shows in the park turned out to be especially challenging, as we had no way to plan them due to the state of emergency set by the Turkish government. We were interested in performing for the entire population of  Kurdish, Turkish, and Arab communities together, even though they are usually separate. 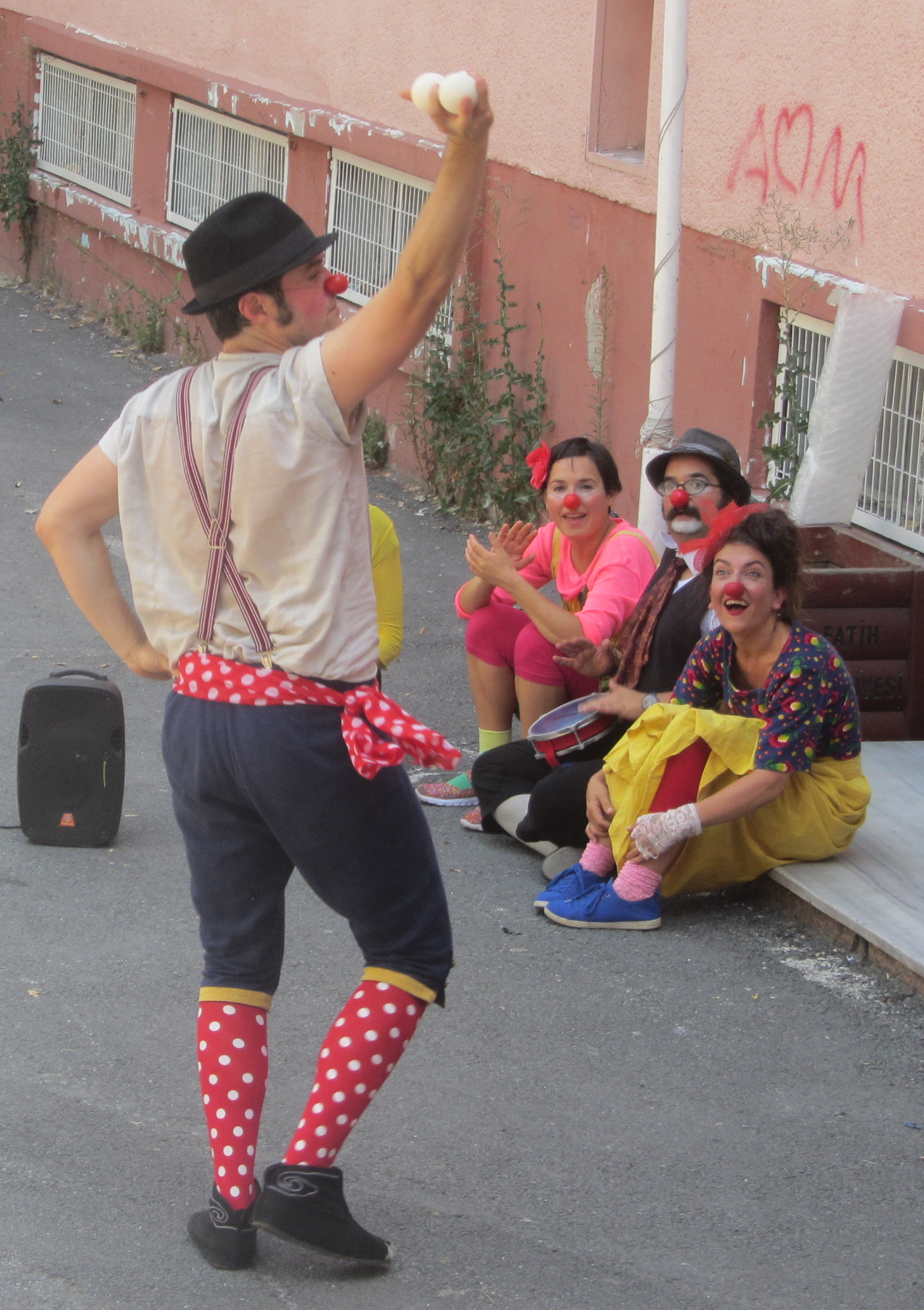 After the many shows, we travelled to Antep, a town in the neighboring province. We dropped off our stuff at the local hostel and were welcomed by kids full of energy and joy, excitedly greeting us even before we started to perform. We were getting used to this wonderful pre-show energy we’d enjoyed on other parts of this trip..

Our local NGO partners explained that our audience was, again, quite mixed (another theme!) with Syrian refugees, local migratory populations who speak a Domari dialect (source), and a third group.

After the show, we had a small rest and tea and then began to march in a parade which quickly became quite exciting! I did notice, however, that even in this nice moment of togetherness, the small girls were always keeping a distance from me, as I’m a man (Gabriela, Selene, Sara, and Ezgi were hugging them and sharing lots of love). I realized that the reality of this place make the girls separate themselves from any man they do not know.

When we spoke with the head of the NGO, we found out her husband was in jail for nearly two months for making a joke on the phone with a friend about not leaving computers at home during holidays because of incriminating information on them.

The second-to-last day of our trip, we performed three shows, though I was only able to perform in one after waking up very weak with a bad stomach sickness. What a bad situation! I decided to stay, and the rest of the team performed two improv shows without me in the morning. I joined them at lunch, but then I threw up a few minutes after arriving and again half an hour before the show. I was feeling weak until the last day when we we all were able to perform in a community center of ASAM in Gaziantep.

As I finish this trip, I am very tired, but I know there is a lot of work for us to do here in Turkey with Syrian refugees but also for Kurdish and other communities, too. It’s our silly job as clowns to help everyone stay resilient through laughter. 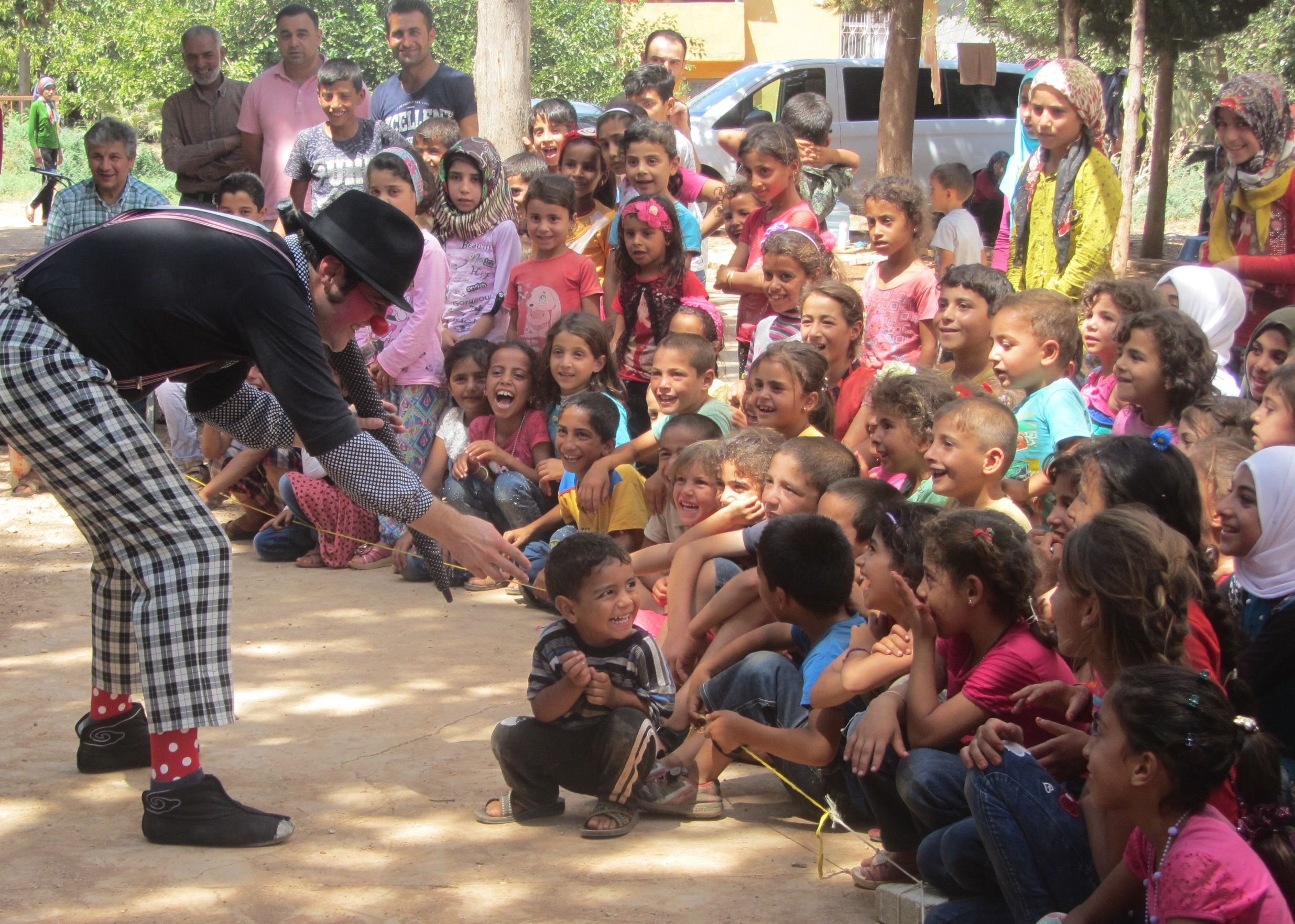