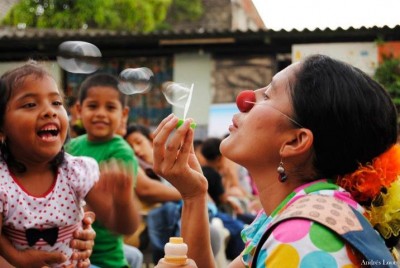 I was honored to join this team of clowns and as director of Clowns without Borders USA and overjoyed to watch years of fundraising, training and dedication from my staff and volunteers produce such a wonderful experience.  The work began as we joined together in Guayaquil for two short days of show creation.  Our creative team was made up of actors with different backgrounds regarding experience and expertise.  We had met with the team at ACNUR and learned that it would be appreciated if we could create a show with a theme of inclusion.

Inclusion became a necessity because our team itself was diverse with clown skills, professional experience and ideas for what the show should be.  We collaborated, we worked together, we agreed and disagreed.  After two days, the show “Chiarivari” was born. Chiarivari is a term used in the circus to describe the opening scene of a performance in which the actors create a rapid-fire succession of costume changes and brief performance pieces.  It is a mixture of many things, it feels random and chaotic; it mirrors life. The term chiarivari also refers to a traditional French practice of discordant music mocking newly-weds—some cultures have used chiarivari as a positive celebration, other as a humiliating mockery.  All together, and for us clowns, Chiarivari was the brining together of ideas, acts, music, cultures and joy—in our own way, abstract integration.

After an opening show in Guayaquil, we began a five-day tour that took us to some of the most scenic places I’ve ever seen.  We packed into a van and drove hours to reach our ACNUR partners in Esmeraldas.  From there we continued on towards San Lorenzo,  Chical, Maldonado, Tulcán, Ibarra, and finally back to Bastión Popular in Guayaquil.  Our journey was challenging and inspiring, I was surprised daily by the joy, humanity and generosity I experienced in each of the communities we visited.

One of my most memorable experiences was performing in Chical at a small school for 250 people.  We arrived in this community which is just meters from the Colombia border and were welcomed by the children and families there awaiting our show.  Joy was endemic as laughter did not stop from the beginning of the show until the end.  Afterwards, we were swarmed by the audience asking us to show magic tricks a second time or for us to simply keep acting like clowns and making the public laugh.  The moments of improvisation like these after the performances are my favorite as I have a beautiful opportunity to relate to people in a fun and unusual way.

While performing for this particular crowd it struck me that I had no idea who was a refugee and who was not.  Each child played the same way; each parent laughed and held their children the same way.  Shades of skin color varied, accents varied slightly, but other than that everyone seemed to be of the same place, time and community.

After the show, we walked down to the Colombia/Ecuador boarder to view the beautiful river that created this invisible line between nations.  There was a footbridge, free of police, military, guards or officials;  it connected the two countries over which people walked freely from side to side.  We crossed over and back and I saw that Colombia looked just the same as Ecuador standing on either side of the river.  Without the idea of a border, I realized that we were doing nothing more but standing on another side of a river.

The rest of the clown shows on this tour made me think of this border experience: When children laugh and when families come together to witness a clown show, everyone becomes the same, united.  Laughter transcends borders, beliefs or  refugee status.  It is a concrete example that we all can share the same space, we can all laugh freely together and that all people, when it comes to it, are simply that—people.

In many other shows we were welcomed similarly the way we were welcomed in Chical, with smiles, hugs and words of gratitude.  In Maldonado, we had the chance to welcome soldiers into our audience.  And despite their camouflage outfits, guns and helmets, the soldiers laughed just as joyfully as the children in the crowd.

Our partners with ACNUR educated us in each place we visited about the history of the various communities.  They spoke of discrimination towards the refugee community and yet, despite this information, during our shows there seemed to exist none.  The communities, the families, the clowns and all others were simply together, laughing and enjoying each other’s company.

This time with UNCHR/ACNUR was inspiring and life-changing.  My appreciation for their help in creating this program is deep and my gratitude for their aspirations of unity and integration is strong.  Although some may view the contribution of the clowns as small, I believe this program modeled the potential we all have to live, work and play together in peace, regardless of history or nationality.