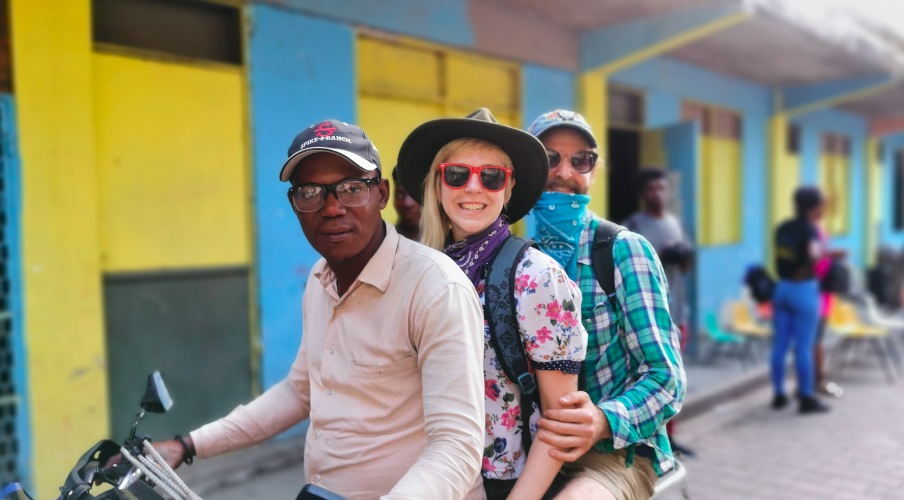 Robin Lara and her brother Tim toured to Haiti over the 10th anniversary of the catastrophic 2010 earthquake. Tim is deeply connected to a community on La Gonâve, and his friends there were happy to welcome him and his sister for their CWB tour!

My clown partner in crime on this tour was my older brother, Tim. He has been going to Haiti once or twice a year for the past eight years. He is part of a community that formed around a women’s art center at the top of a mountain on an island off the coast of Haiti. He has true, close friends and even godchildren here. It’s a huge deal to everyone that Tim brought his sister. I’m called Woben, in Haitian Creole, instead of Robin. I’m surprised to see how embedded my brother is in the community here.

One of his closest friends is a smiley, toothless old man named Vege who loves Tim so much that Vege sometimes just sits next to him stroking my brother’s beard. We spend hours each day, including almost every meal, with Vege, cracking jokes nonstop and trying to answer his riddles. Vege and I hit it off immediately, and he can’t stop talking about how I put a machete on my chin and it didn’t fall off—I was balancing it!

But Vege isn’t the only connection I’ve made. We share every meal with local people, eating what they eat. Our door is almost always open and the stream of people ceases only when we go to sleep. When I get sick, children feel my forehead and urgently tell my brother I have a fever. I juggle with those kids almost every day. We’re able to save a toe when one of the kids almost cuts his off with a machete. When I get to know someone new, I also meet their entire family. That’s not something I can say for any of my friends back home. These folks fill our first audience of the tour, which makes it the most fun. They know and love us, and are happy to show their support in the form of belly-laughs and non-stop cheering.

Many people on the island come to see our show multiple times. People seem to know us everywhere we go. Folks ask us to please stay, and not only do more shows but teach them how to do what we do. There’s no word for “clown” or “juggling” or even “show” in Creole, so we’re bringing a completely novel experience that has ended up as a smash hit.

On humanitarian clown trips, I’m motivated to do as many shows as possible in order to reach the maximum number of people. Sometimes the trade off is a fleeting sense of community. I always grow close with those who are on tour with me, but over three-and-a-half weeks, I’ve learned more about everyday life on a small slice of Haiti than I could have ever imagined.

And so, I’m grateful. To my brother for being the kind of person I can share this experience with; to the people of Matènwa and greater La Gonâve for opening their hearts and their homes to me; and for the privilege to have this experience in the first place.

Vege made me promise that when I left I’d take him with me in a suitcase, even if it meant we’d have to cut off his legs to fit him in. In the end we settled on a more reasonable agreement: that I am his Woben, and he is my Vege.