I’m having an excellent time in Haiti with a wonderful Clowns Without Borders group: Naomi Shafer (NEYT teacher and former student) and Camila Rud, a veteran CWB Sweden performer–both funny and talented travel companions. We seem 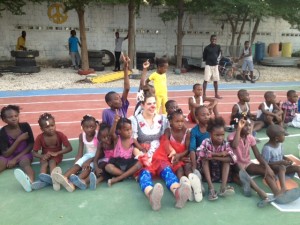 to have a particularly good combo of skills.

Haiti is a delight. The people are so sweet and kind, (and I’m enjoying a new level of fluency in Kreyol which means I can communicate with everyone, woohoo!). We are being very well looked after and are looking out for lots of local folks ourselves, as well as making people laugh in different settings. In Port-au-Prince, we stayed at Haiti Communitère, an international/Haitian run center for accommodation, grass-roots organizations, and networking. We met lots of folks working on cool projects around Haiti and CWB hosted a workshop there. 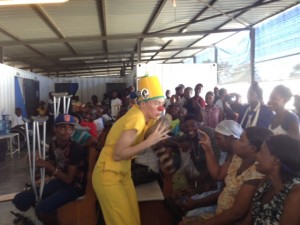 Medecins Sans Frontieres got wind of us and brought us into two of their three hospitals where they treat people for free. It was an honor for us and a delight for everyone especially the kids who are couped up day in and day out with injuries, or burns…and boredom and worry. The nurses and doctors loved it too. Of course, many people were struggling with their injuries, but many were able to respond to a moment of distraction. 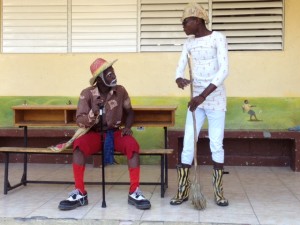 MSF also set us up with a show at a boys orphanage. We brought our Cité Soleil comedian friends ‘Comedus,’ and they opened with their particular brand of Haitian style characters and jokes, as well as some mime bits they do (and that we have been coaching). The show culminated in some boys showing their comedy sketches and dancing.

After running into Daniel Tillias, who I met performing in Haiti 5 years ago, he invited us to do a show at Sacala, which is an organization involved with a big movement (Soley Leve) which is leading regeneration of the neighborhood of Cité Soleil. It’s Comedus’s home turf, so they joined us for the show for 175 people.

Beforehand our comic friends took us to their neighborhood where we pulled off some shtick in the street, much to the delight and surprise of the inhabitants who rarely get foreign visitors and certainly not clowns. 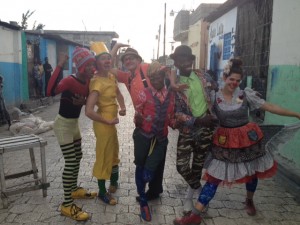 We are currently guests of clown and CWB affiliate, Morlon Bellerice and his young people’s theatre company (MJC-Mouvement de la Jeunesse pour la Culture) in Grand Goave. We are rehearsing a circus show with 25 young actors, which we’ll be taking around to towns affected by the hurricane, including Leogane and Les Cayes.

And it looks like we might visit our dear friends at OFEU orphanage too! And after Camilla and Naomi head home, I’m staying on in Haiti, gratefully sponsored by Project Troubador! From January 4th to 10th I’ll be with Christie Cahill to do a circus arts program at OFEU. Christie is a dancer/aerialist/clown, former NECCA student, and regular HOST volunteer when she was in Brattleboro. We’d like to create a show with the kids and include their newly acquired music skills (thanks to HOST, the orphanage’s main sponsor and other donors). 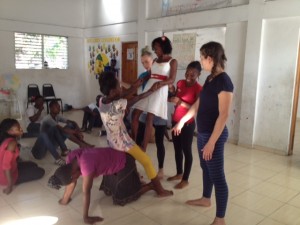 I’ll also have a week in Haiti to continue working with another clown and CWB affiliate, César Oudly and his clown group Clowns Sans Fason…and try to build in few more collaborators to do some shows around Haiti. 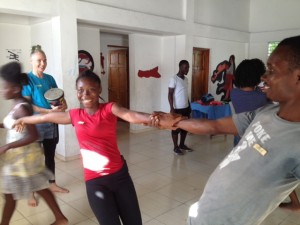 It’s an honor and privilege for me to be working and collaborating, both in the US, and in India, Bangladesh, and Haiti, with other circus and theater artists, and youth allies, and organizations like Clowns Without Borders, Project Troubador, and Magicians Without Borders (and a whole host of in-the-country organizations) to perform for, and with, and teach and inspire, young people. I am very grateful for this opportunity and to share some of the privilege I have of living with enough and access to resources, (like income generating work and healthcare), with folks that live with much less, in that regard, and who share an abundance of love and goodwill with me.